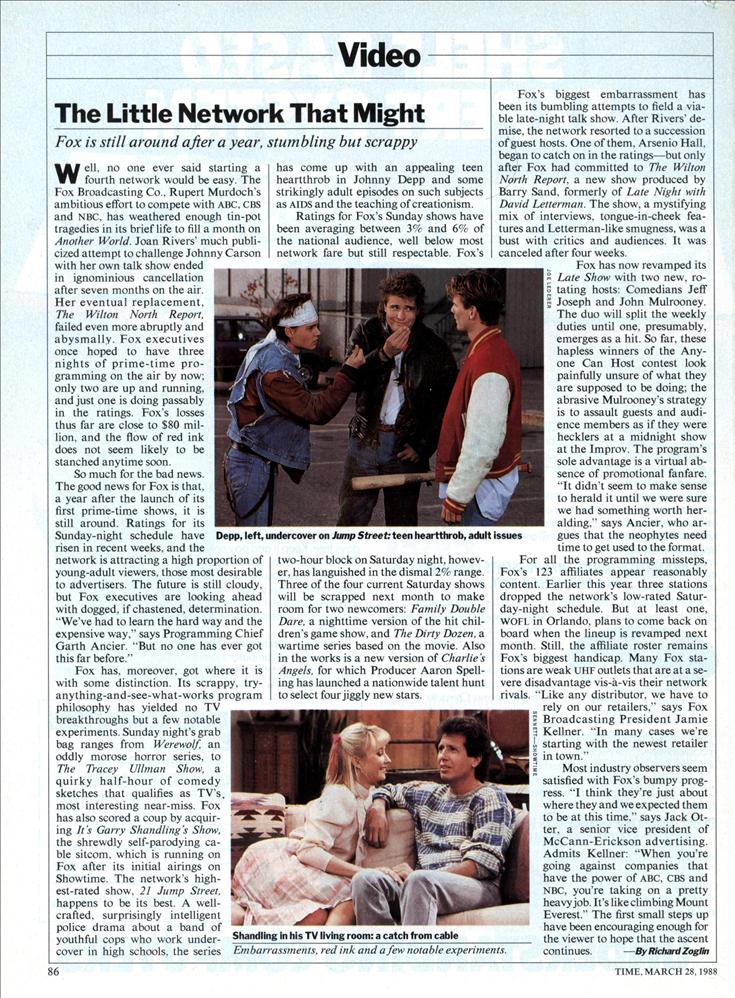 Fox is still around after a year, stumbling but scrappy

Well, no one ever said starting a fourth network would be easy. The Fox Broadcasting Co., Rupert Murdoch’s ambitious effort to compete with abc, cbs and nbc, has weathered enough tin-pot tragedies in its brief life to fill a month on Another World. Joan Rivers’ much publicized attempt to challenge Johnny Carson with her own talk show ended in ignominious cancellation after seven months on the air. Her eventual replacement, The Wilton North Report, failed even more abruptly and abysmally. Fox executives once hoped to have three nights of prime-time programming on the air by now; only two are up and running, and just one is doing passably in the ratings. Fox’s losses thus far are close to $80 million, and the flow of red ink does not seem likely to be stanched anytime soon.

So much for the bad news. The good news for Fox is that, a year after the launch of its first prime-time shows, it is still around. Ratings for its Sunday-night schedule have risen in recent weeks, and the network is attracting a high proportion of young-adult viewers, those most desirable to advertisers. The future is still cloudy, but Fox executives are looking ahead with dogged, if chastened, determination. “We’ve had to learn the hard way and the expensive way,” says Programming Chief Garth Ancier. “But no one has ever got this far before.”

Fox has, moreover, got where it is with some distinction. Its scrappy, try-anything-and-see-what-works program philosophy has yielded no TV breakthroughs but a few notable experiments. Sunday night’s grab bag ranges from Werewolf, an oddly morose horror series, to The Tracey Ullman Show, a quirky half-hour of comedy sketches that qualifies as TV’s, most interesting near-miss. Fox has also scored a coup by acquiring It’s Garry Shandling’s Show, the shrewdly self-parodying cable sitcom, which is running on Fox after its initial airings on Showtime. The network’s highest-rated show, 21 Jump Street, happens to be its best. A well-crafted, surprisingly intelligent police drama about a band of youthful cops who work undercover in high schools, the series has come up with an appealing teen heartthrob in Johnny Depp and some strikingly adult episodes on such subjects as aids and the teaching of creationism.

Ratings for Fox’s Sunday shows have been averaging between 3% and 6% of the national audience, well below most network fare but still respectable. Fox’s two-hour block on Saturday night, however, has languished in the dismal 2% range. Three of the four current Saturday shows will be scrapped next month to make room for two newcomers: Family Double Dare, a nighttime version of the hit children’s game show, and The Dirty Dozen, a wartime series based on the movie. Also in the works is a new version of Charlie’s Angels, for which Producer Aaron Spelling has launched a nationwide talent hunt to select four jiggly new stars.

Fox’s biggest embarrassment has been its bumbling attempts to field a viable late-night talk show. After Rivers’ demise. the network resorted to a succession of guest hosts. One of them, Arsenio Hall, began to catch on in the ratings—but only after Fox had committed to The Wilton North Report, a new show produced by Barry Sand, formerly of Late Night with David Letterman. The show, a mystifying mix of interviews, tongue-in-cheek features and Letterman-like smugness, was a bust with critics and audiences. It was canceled after four weeks.

Fox has now revamped its Late Show with two new, rotating hosts: Comedians Jeff Joseph and John Mulrooney. The duo will split the weekly duties until one, presumably, emerges as a hit. So far, these hapless winners of the Anyone Can Host contest look painfully unsure of what they are supposed to be doing; the abrasive Mulrooney’s strategy is to assault guests and audience members as if they were hecklers at a midnight show at the Improv. The program’s sole advantage is a virtual absence of promotional fanfare. “It didn’t seem to make sense to herald it until we were sure we had something worth heralding,” says Ancier, who argues that the neophytes need time to get used to the format.

For all the programming missteps. Fox’s 123 affiliates appear reasonably content. Earlier this year three stations dropped the network’s low-rated Saturday-night schedule. But at least one, WOFL in Orlando, plans to come back on board when the lineup is revamped next month. Still, the affiliate roster remains Fox’s biggest handicap. Many Fox stations are weak uhf outlets that are at a severe disadvantage vis-a-vis their network rivals. “Like any distributor, we have to rely on our retailers,” says Fox | Broadcasting President Jamie 3 Kellner. “In many cases we’re I starting with the newest retailer 1 in town.”

i Most industry observers seem satisfied with Fox’s bumpy progress. “I think they’re just about where they and we expected them to be at this time,” says Jack Otter, a senior vice president of McCann-Erickson advertising. Admits Kellner: “When you’re going against companies that have the power of abc, cbs and NBC, you’re taking on a pretty heavy job. It’s like climbing Mount Everest.” The first small steps up have been encouraging enough for the viewer to hope that the ascent continues. —By Richard Zoglin