The Magic of Sound Explained By Science (Feb, 1930) 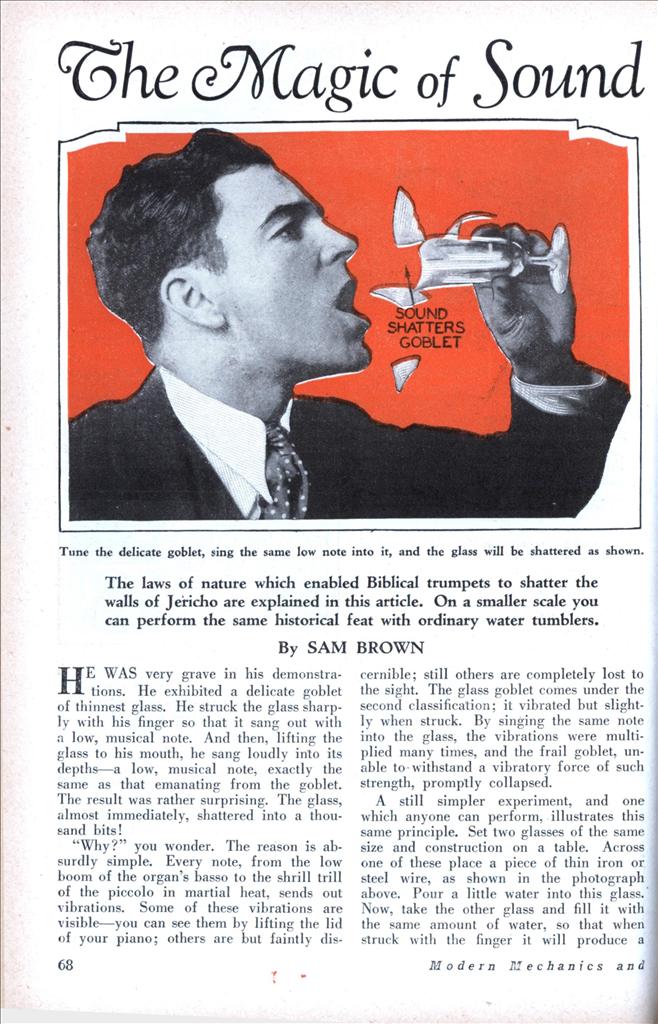 The Magic of Sound Explained By Science

The laws of nature which enabled Biblical trumpets to shatter the walls of Jericho are explained in this article. On a smaller scale you can perform the same historical feat with ordinary water tumblers.

HE WAS very grave in his demonstrations. He exhibited a delicate goblet of thinnest glass. He struck the glass sharply with his finger so that it sang out with a low, musical note. And then, lifting the glass to his mouth, he sang loudly into its depths—a low, musical note, exactly the same as that emanating from the goblet. The result was rather surprising. The glass, almost immediately, shattered into a thousand bits!

“Why?” you wonder. The reason is absurdly simple. Every note, from the low boom of the organ’s basso to the shrill trill of the piccolo in martial heat, sends out vibrations. Some of these vibrations are visible—you can see them by lifting the lid of your piano; others are but faintly discernible; still others are completely lost to the sight. The glass goblet comes under the second classification; it vibrated but slightly when struck. By singing the same note into the glass, the vibrations were multiplied many times, and the frail goblet, unable to withstand a vibratory force of such strength, promptly collapsed.

A still simpler experiment, and one which anyone can perform, illustrates this same principle. Set two glasses of the same size and construction on a table. Across one of these place a piece of thin iron or steel wire, as shown in the photograph above. Pour a little water into this glass. Now, take the other glass and fill it with the same amount of water, so that when struck with the finger it will produce a musical note identical to that produced by the first glass.

Everything is now ready for the experiment. If you will produce a musical note by running your resined finger around the top of the second glass, you will cause the wire on the first glass to dance about in a rather quaint fashion. This results from the fact that both glasses vibrate in unison to the musical note sounded, and these vibrations are of sufficient strength to cause the wire to dance.

Now, just what is the practical value of these experiments? Here’s the answer: People today are demanding less noise. Business offices desire less of the incessant chatter which goes with the average typewriter. Architects are spending both time and money in designing buildings and homes that will be sound-proof. And … it is only through a study of the laws governing sound, and a thorough understanding of the effects produced, that they can hope to achieve permanent results.

Scientists in New York City have constructed two remarkable rooms. In one room, if you are to run a typewriter or even talk in a conversational voice, the walls of the room will pick up the sound waves and send them back in such multiple waves as to almost deafen the average person. In the other room, a typewriter makes no more noise than the sharp click as each key strikes the platen, and the human voice is dearly audible, crisp and sharp.

What causes the difference? The basic principle is one of sound absorption. In the experiments described at the beginning of this article, glasses were used because they are not sound absorptive—they reflect the noise rather than absorb it. In a similar manner, the walls and ceiling of the noisy room were constructed of a highly-reflective plaster, and the furnishings were, for the most part, of hard, unupholstered wood. Knowing what causes the sounds in the first room, you can easily imagine what absorbs the sounds in the quiet room. In the first place, the plaster is of a special porous construction, very absorptive. For the second, and equally important part, the furnishings were deeply upholstered, and a profusion of drapes and heavy curtains acted as sound absorbers.

Do you see the difference? To illustrate again, have you ever noticed the “hollow”‘ sound which emanates from rooms devoid of furniture? The sound absorbers are gone. Place furniture in the room, cover the floor with a rug, hang up the curtains, and with each successive step the “hollow” sound gets less and less until it becomes unnoticeable. The living room, especially, even with its highly-reflective brick mantel, is ordinarily a quiet room because of the profusion of sound absorbers. An exactly opposite type of room is the bathroom, almost entirely furnished with reflective materials—the haven of the world’s worst singers because any voice in a bathroom reverberates back and forth until the singer’s voice seems to burst out into a magnificent chorus of song.

An interesting point in connection with this matter of furniture as sound absorbers is that drapes and curtains, when hung straight, are fully one-third less absorptive than when hung in the conventional draped manner. Tests have shown that heavy felt mats are the best sound absorbers, and that rugs with a good nap are far more absorptive than hard-finish floors or floor coverings. Heavy wallpaper and plaster, too, is far ahead of brick or travetine stone as an absorber of sound.

All sound waves, of course, cannot be detected by the human ear. A novel little bit of magic illustrates this principle. The performer takes a fork in his right hand. He produces a musical note from the fork by snapping the tines with his fingers. The note lasts but a moment and then dies away. But … if the end of the fork is touched to a solid object, such as a small matchbox concealed in the hand, the note will at once become audible again, and the performer can pretend to be picking the note from the previously silent fork and throwing it into a glass, as shown above.

The reason for this is simple. The human body is very absorptive, so that the vibrations from the fork are almost at once “swallowed” by the hand. It still continues to sing, however, but inaudibly, until the fork’s handle is touched to the hard, reflective surface of the matchbox, and then the note immediately becomes audible again.

Future years will see vast strides in the science of sound. Already, some of its principles are being put into practice in navigation and engineering. In coast navigation, especially, it is far simpler to start a sound traveling downwards, listen for the echo from the bottom, and calculate the depth of the water from the elapsed time, rather than lower a plumb line, pull it in again, measure it . . .

Of course, it must be taken into consideration that sound waves travel four times as fast in water as they do in the air. A still higher rate of speed is obtained through steel, the speed being increased fully sixteen times. You can easily observe this wide variance of speed by a simple test. Stand on a railroad track. Watch a man, some distance away, strike the steel rail with a hammer. Almost immediately you will get the sound of the blow over the rail, but a considerable interval will elapse before you hear the sound by air.

Indeed you might never hear the sound by air at all if the wind currents are of a contrary nature. Many curious incidents of this type occurred in the World war. A terrific explosion might be heard 150 miles away, yet people residing in certain areas closer to the explosion would hear nothing. The reason is obviously one of air currents, these acting at times to carry the sound high overhead, and then, perhaps, bringing it down to within hearing level some distance on.

Business men consider sound important, and, paradoxical as it may seem, their reason for its importance is that some of it must be eliminated. The typewriter is perhaps the worst offender. In a room where there is nothing but typists, the resultant chatter does not, seemingly, affect the efficiency of the workers; but typewriters in action in a room which also houses “talking” workers greatly impairs the efficiency of these talking workers.