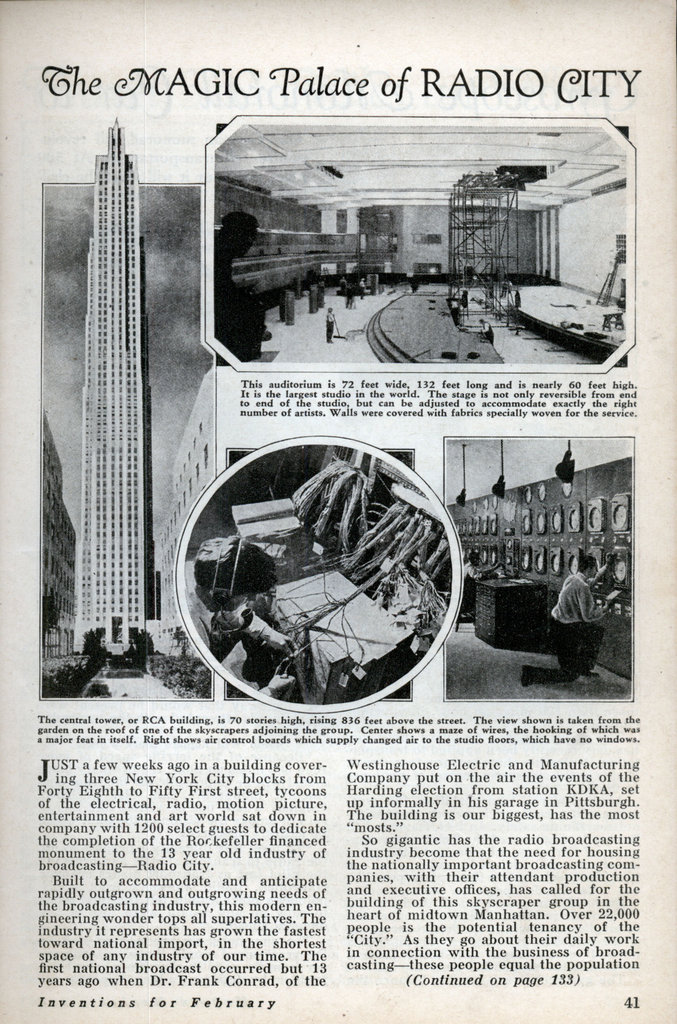 The MAGIC Palace of RADIO CITY

JUST a few weeks ago in a building covering three New York City blocks from Forty Eighth to Fifty First street, tycoons of the electrical, radio, motion picture, entertainment and art world sat down in company with 1200 select guests to dedicate the completion of the Rockefeller financed monument to the 13 year old industry of broadcastingâ€”Radio City.

Built to accommodate and anticipate rapidly outgrown and outgrowing needs of the broadcasting industry, this modern engineering wonder tops all superlatives. The industry it represents has grown the fastest toward national import, in the shortest space of any industry of our time. The first national broadcast occurred but 13 years ago when Dr. Frank Conrad, of the Westinghouse Electric and Manufacturing Company put on the air the events of the Harding election from station KDKA, set up informally in his garage in Pittsburgh. The building is our biggest, has the most “mosts.”

So gigantic has the radio broadcasting industry become that the need for housing the nationally important broadcasting companies, with their attendant production and executive offices, has called for the building of this skyscraper group in the heart of midtown Manhattan. Over 22,000 people is the potential tenancy of the “City.” As they go about their daily work in connection with the business of broadcastingâ€”these people equal the population of Freeport, Ill., Vicksburg, Miss., Jackson, Tenn., or Boise, Idaho. All buildings connected with the enterprise are biggest. All studios are biggest. There is the greatest number of biggest things one can possibly imagine.

The central auditorium or broadcasting studio, where the dedicating tycoons and guests met, is 75 by 132 feet, and has stages which are reversible.

Any brief description of Radio City must of necessity be a statistical parade. This “City” is the western part of the Rockefeller center which occupies three square city blocks, so valuable that the yearly rental is $3,000,000 for land alone.

The central tower, or RCA building in which is housed NBC’s new headquarters, dominates the whole community. It is 70 stories high, rising 836 feet in the air.