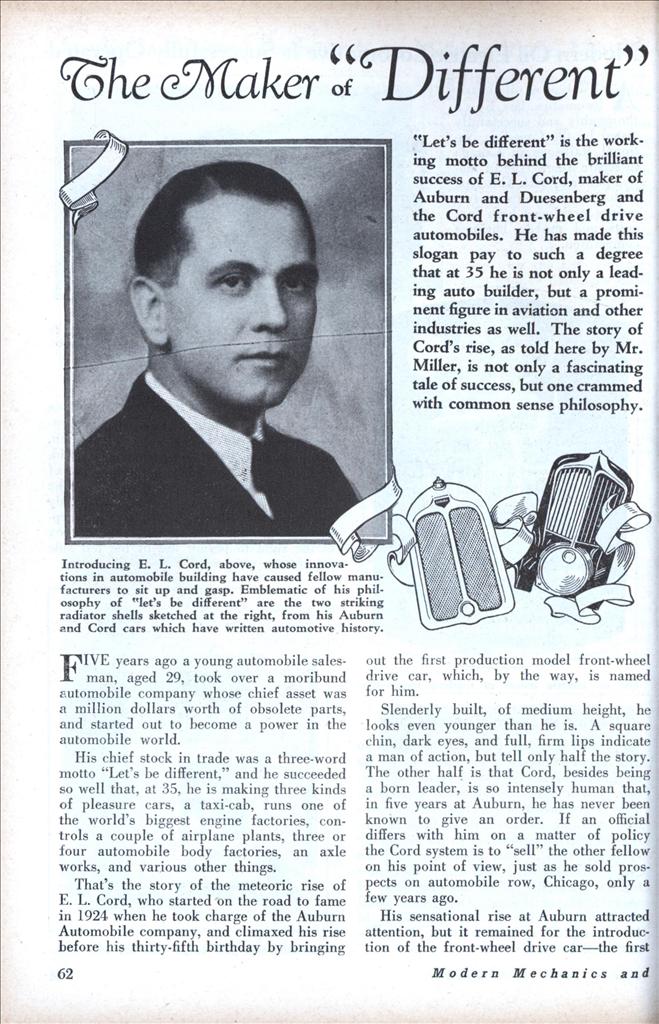 The Maker of “Different” Automobiles

“Let’s be different” is the working motto behind the brilliant success of E.L. Cord, maker of Auburn and Duesenberg and the Cord front-wheel drive automobiles. He has made this slogan pay to such a degree that at 35 he is not only a leading auto builder, but a prominent figure in aviation and other industries as well. The story of Cord’s rise, as told here by Mr. Miller, is not only a fascinating tale of success, but one crammed with common sense philosophy.

FIVE years ago a young automobile salesman, aged 29, took over a moribund automobile company whose chief asset was a million dollars worth of obsolete parts, and started out to become a power in the automobile world.

His chief stock in trade was a three-word motto “Let’s be different,” and he succeeded so well that, at 35, lie is making three kinds of pleasure cars, a taxi-cab, runs one of the world’s biggest engine factories, controls a couple of airplane plants, three or four automobile body factories, an axle works, and various other things.

That’s the story of the meteoric rise of E.L. Cord, who started on the road to fame in 1924 when he took charge of the Auburn Automobile company, and climaxed his rise before his thirty-fifth birthday by bringing out the first production model front-wheel drive car, which, by the way, is named for him.

Slenderly built, of medium height, he looks even younger than he is. A square chin, dark eyes, and full, firm lips indicate a man of action, but tell only half the story. The other half is that Cord, besides being a born leader, is so intensely human that, in five years at Auburn, he has never been known to give an order. If an official differs with him on a matter of policy the Cord system is to “sell” the other fellow on his point of view, just as he sold prospects on automobile row, Chicago, only a few years ago.

His sensational rise at Auburn attracted attention, but it remained for the introduction of the front-wheel drive car—the first really new development in automobiles in more than a decade—to focus public interest. Yet Cord himself is not a fanatic about the front wheel drive, as witness his reply when asked if he thought the new car would render rear wheel drive types obsolete.

“No attempt has been made,” he answered, “to obsolete the rear drive type of automobile through the introduction of the Cord front drive. The new car is being built for a distinct field—for those who demand the advancements that only a front drive car can give and who are willing to pay the price for these advancements.

“We are going to build more rear drives at Auburn in 1930 than ever before by at least fifty per cent, and in the Duesenberg we have produced the world’s finest rear drive automobile. While we believe that the front drive type automobile has many advantages which cannot be obtained by any other method of propulsion, we do not conclude that it will appeal to every buyer immediately. We do feel that there are sufficient persons who are interested in the safety, ease of operation and roadability which it provides to warrant our efforts in making it available.”

That’s the Cord policy of “Let’s be different” working again.

To understand how he has worked it you have to go back to the time when the bankers who were interested in Auburn were looking for a man to get the property out of a rut into which it was slipping. E.L. Cord was a coast product, a builder of converted Ford racing cars at sixteen, a truck operator in Death Valley a bit later, and then a salesman, first to movie stars, and then on automobile row, Chicago.

He started out with the idea that there are always a certain number of people who like something that looks different from the common herd, and will pay to get it, as witness the custom body vogue in higher priced cars. Cord started out to give them a car that would be different. His first step was to install a press that pressed a long, sweeping, curved line into the Auburn hood, and design a new and snappier radiator shell. Just about that time the paint manufacturers developed the new lacquers, and the world became color conscious. The Auburn was one of the first cars to blossom out in most of the shades of Joseph’s coat.

Plenty of other changes were made, too, but that hood line and snappy radiator shell remain the distinctive insignia of Auburn even today. The other changes were along the lines of unseen mechanical improvements, better bodies and upholstery, and more conveniences. As witness the fact that Auburn was the first to put the starter button on the instrument board.

The reason for that was another quirk of Cord methods. Not being an engineer, he is not satisfied with blueprints, but insisted on having dummy cars and bodies built so he could climb in, sit down and try the leg room, look out over the fenders and see the road view, survey the • instrument board and try the gear and brake levers. And he called in outsiders, including women, and had them go through the same performance.

When the first Cord model was completed, the president, accompanied by a single mechanic, disappeared for weeks. When they returned they had made a 10,000-mile trip to the Pacific coast and back, over mountains and across the desert. At gasoline stations, in front of garages and hotels, and other stops along the road, Cord stood back while passers-by stopped to examine the car, listened to their comments, watched them climb in and try the seats, and all the time he filed away their endorsements and objections. Back at Auburn the comments were tabulated, and a number of minor changes made to meet them.

“Nobody,” says Cord, “has a corner on brains, and no manufacturer can corner the public taste, or build a car that will meet the demands of every possible purchaser. But there is a field for the manufacturer who will build something that, is different and will please that portion of the public that is tired of sameness.

“There was nothing revolutionary about our introduction of color in automobiles. Practically every other thing of general use, from shirts, collars and neckties, to kitchen furniture, had gone in for vivid colors, so it was only natural to assume that a color conscious public would welcome brightness in automobiles.”

That his theories have found public support is indicated by the things that have passed into his control in five short years. Auburn acquired Lycoming Engines, today the biggest manufacturer of straight eight motors in the world; Duesenberg Motors, and brought out a 265 h.p. car that does ninety in second gear and 120 in top; Limousine Body Corporation, Central Manufacturing Company, another body plant; and bought the old McFarland, Lexington and Amstead Engine plants to produce Auburn cars, while the original factory was turned over to the new Cord. Then there is the $125,000,000 Cord Corporation, a holding company which controls Stinson Aircraft, Corman Aircraft, a new company which has just produced its first two tri-motored planes; Columbia Axle, Expando Body, Safety Cab and the Union City Body company, besides owning a large interest in Auburn and all of its subsidiaries.

The front wheel drive mechanism used in the new Cord is a development of Harry Miller’s front wheel drive racing cars. The interesting thing about the car is its lowness, made possible by the fact that the frame is straight, no elbow being needed at the rear to clear an axle gear housing.