Popular Science
Issue: May, 1959
Posted in: History, Space
Tags: rockets
No Comments on The Man Who Opened the Door to Space (May, 1959) 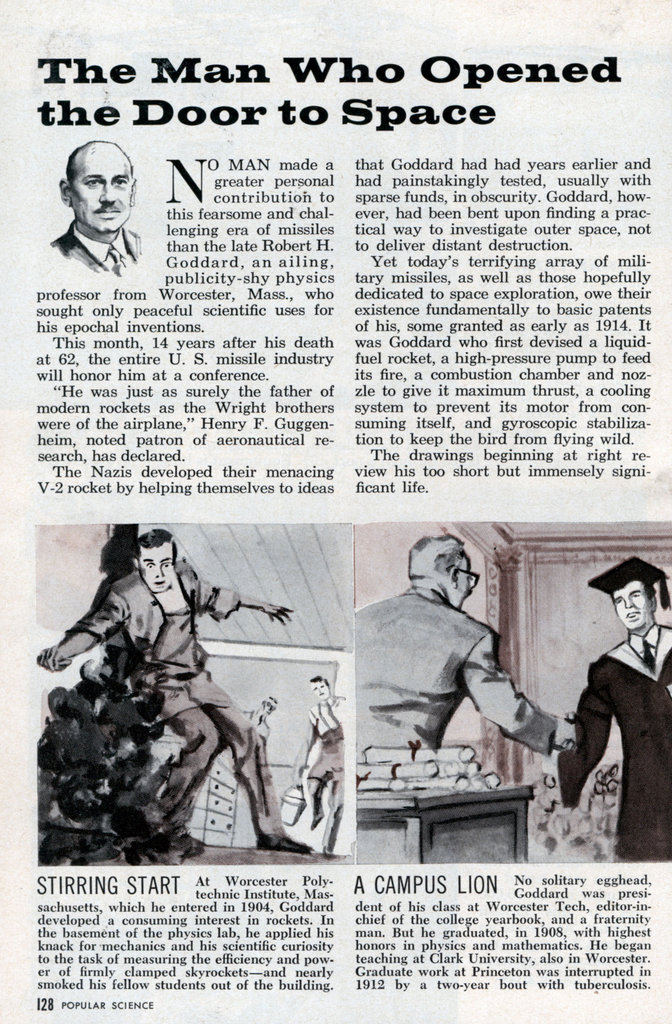 The Man Who Opened the Door to Space

NO MAN made a greater personal contribution to this fearsome and challenging era of missiles than the late Robert H. Goddard, an ailing, publicity-shy physics professor from Worcester, Mass., who sought only peaceful scientific uses for his epochal inventions.

This month, 14 years after his death at 62, the entire U. S. missile industry will honor him at a conference.

“He was just as surely the father of modern rockets as the Wright brothers were of the airplane,” Henry F. Guggenheim, noted patron of aeronautical research, has declared.

The Nazis developed their menacing V-2 rocket by helping themselves to ideas that Goddard had had years earlier and had painstakingly tested, usually with sparse funds, in obscurity. Goddard, however, had been bent upon finding a practical way to investigate outer space, not to deliver distant destruction.

Yet today’s terrifying array of military missiles, as well as those hopefully dedicated to space exploration, owe their existence fundamentally to basic patents of his, some granted as early as 1914. It was Goddard who first devised a liquid-fuel rocket, a high-pressure pump to feed its fire, a combustion chamber and nozzle to give it maximum thrust, a cooling system to prevent its motor from consuming itself, and gyroscopic stabilization to keep the bird from flying wild.

The drawings beginning at right review his too short but immensely significant life.

STIRRING START
At Worcester Polytechnic Institute, Massachusetts, which he entered in 1904, Goddard developed a consuming interest in rockets. In the basement of the physics lab, he applied his knack for mechanics and his scientific curiosity to the task of measuring the efficiency and power of firmly clamped skyrocketsâ€”and nearly smoked his fellow students out of the building.

A CAMPUS LION
No solitary egghead, Goddard was president of his class at Worcester Tech, editor-in-chief of the college yearbook, and a fraternity man. But he graduated, in 1908, with highest honors in physics and mathematics. He began teaching at Clark University, also in Worcester. Graduate work at Princeton was interrupted in 1912 by a two-year bout with tuberculosis.

FACT-FANCIER
Skinny and sickly, young Robert was barred from a boy’s usual strenuous activities. He turned to books of science, but also read with zest the fiction of H. G. Wells and Jules Verne, making stern marginal notes wherever he caught the authors being unscientific. One novel he especially liked was Verne’s From the Earth to the Moon, in which rockets played a crucial role.

EXPERIMENTER
He built an aluminum balloon when he was 15 years old (1898), filled it with gas and expected it to rise to great heights. It didn’t get off the ground. Then, foreshadowing a career in which his patience won out over many setbacks, he stoically accepted the “failior,” as he spelled it. and turned to other investigations. One of these was a study of how birds fly.

CRUCIAL TESTS
Back at Clark in 1914, he experimented with and patented a small steel combustion chamber to which he could fit nozzles of various sizes. With these he demonstrated that the efficiency of a rocket could be vastly improved. By showing that his creation worked even better in a vacuum, Goddard proved that rocket propulsion was feasible for flights in outer space.

WAR EFFORT
Early in 1917, the Smithsonian Institution granted Goddard $5,000 to help finance his rocket research. Till then he had paid for it .out of his meager salary. And when the U. S. entered World War I. he patriotically put his special knowledge to military use. He and associates developed an antitank rocket that was a forerunner of the bazooka.

WILD STORIES
Goddard’s pioneering treatise on rocketry, “A Method of Reaching Extreme Altitudes,” written in 1919, was a sound, meticulous work. It did, however, contain his prediction that a rocket could be made capable of hitting the moon with a charge of magnesium powder. Certain newspaper stories distorted this and made fun of him. He became aloof except to intimates.

A FOREIGN FAN
Chance brought another great space-age pioneer, Germany’s Hermann Oberth, in touch with Goddard. Unable to find a copy of Goddard’s treatise at Heidelberg, where he was studying math, Oberth in 1922 wrote the American scientist for one (and got it). Oberth had envisioned a liquid-fuel rocket engine; he didn’t know that Goddard was already testing one.

HELP ARRIVES
Public reaction to the notorious second rocket shoot at Auburn was largely unfavorable and discouraging. But young Col. Charles A. Lindbergh had read the stories with keen interest, came to visit Goddard and was much impressed. Lindbergh persuaded Daniel Guggenheim to finance Goddard to a two-year leave, workshop and test area in an empty part of New Mexico.

SELF-CONTROL
As slow but steady improvement in Goddard’s liquid-fuel rockets led them to soar higher and higher above the desert near Roswell, N. M., the scientist saw he must find a way to stabilize them in flight. He devised gyroscopic controls, which worked steering vanes in the nozzle when a rocket started wobbling. Here the controls are being tested before a launching.

HISTORIC DAY
The first liquid-fuel rocket ever launched, a spindly, 10-foot creation of Goddard’s, was fired from his aunt’s farm in Auburn, Mass., on March 16, 1926. The little motor was up front, small tanks of gasoline and liquid oxygen at rear. Ignited by blowtorch, the rocket rose 41 feet, while Goddard’s wife took moving pictures of it, as she did of all later experiments.

TOWN AROUSED
Such a racket resounded through Auburn on July 17, 1929, when Goddard launched a larger and better rocket, which rose 102 feet, that townspeople thought a plane had crashed. Fire engines, ambulances, police and a curious crowd converged on Goddard and his crew. He was told to stop firing rockets in Massachusetts, but the Army offered him an artillery range.

FIERY PORTENT
The most impressive demonstration of the possibilities of Goddard’s long, lonely research came in May, 1935. While the professor watched from a shallow trench, protected by a concrete shield, one of his rockets shot 7,500 feet into the New Mexico sky and reached a speed of 700 m.p.h. Goddard returned to Clark and wrote a treatise on his work that is now celebrated.

TRAGIC SHOCK
In 1944, shortly before the Nazis began firing deadly V-2s at England, one rocket crashed in Sweden. Parts were sent to an Annapolis lab where Goddard was doing research for the Navy. Sadly, he recognized that his brain child had been turned into a mass killer. A year later, in August, 1945, Goddard died. His weak lungs failed after a major operation.