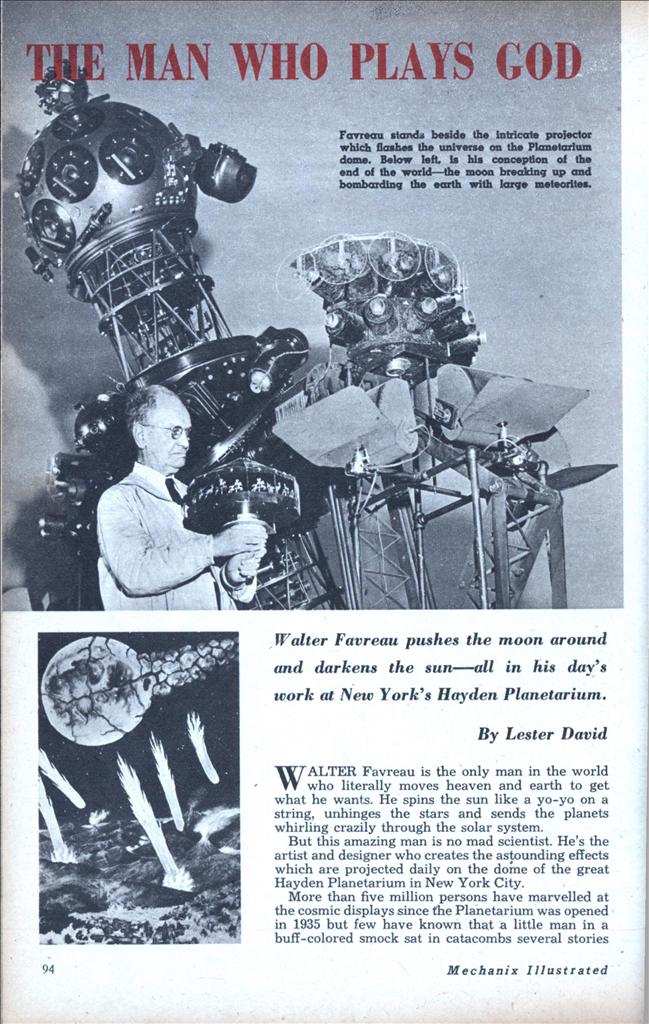 But this amazing man is no mad scientist. He’s the artist and designer who creates the astounding effects which are projected daily on the dome of the great Hayden Planetarium in New York City.

More than five million persons have marvelled at the cosmic displays since the Planetarium was opened in 1935 but few have known that a little man in a buff-colored smock sat in catacombs several stories below, fashioning the wonders they were beholding.

Let’s go backstage for an exclusive look at how he plays puppetmaster to the universe.

First, however, take a look at what is happening in the massive dome. It’s the climax of the “End of the World” spectacle and the audience is witnessing five cosmic catastrophes which might finish off this planet.

The moon is being drawn closer and closer by the earth’s gravity pull. Beautiful at a distance, it is turning into a vehicle of devastation as it hurtles toward us. Finally, an unfamiliar moon, huge and terrible, fills the sky. With a shattering crash it explodes against the earth. The horizon, a skyline of cities, countryside and mountains, erupts into flames to the roar of volcanoes and the howling of unearthly winds. Then, the thunder ebbs and the peaceful dawn of a new day creeps over the horizon of the man-made Planetarium sky.

That was the scene of terror—and this is how Walter Favreau brought it to pass: First, he sat at his board and constructed a papier-mache moon, faithful to the last crater, from astronomical photographs. Then he trundled it into the Planetarium’s photo lab, where the moon was photographed on a lantern slide one inch high and two and one-eighth inches wide.

With infinite care, he colored the tiny slide a glowing moon color, delicately highlighting the hills and shading the craters. Slides must be painted by hand instead of photographed in color because the heat to which they are subjected would fade the color film.

This tiny slide was inserted into a special projector in a side booth. Then the image of a moon was shot up into the dome by a carbon-arc lamp, acting as the light source, and a lens. An electric motor moved the slide slowly toward the light and as the space was narrowed the projected moon loomed larger and larger in the heavens. At the point where the moon filled the entire sky—which happened when the slide was almost touching the light—the projector stopped moving and a second projector in the center of the room was automatically kicked into action. A giant flashbulb was set off, representing the explosive burst, and recorded sound apparatus started playing ominous music and highly amplified sounds of blasts.

And the illusion of the world in flames? That’s what the second projector does. The “world” is actually a silhouette of mountains, buildings and plains, projected from the center all around the base of the dome. These are slides made from charcoal drawings by Favreau. To create the flames, he simply traced wavy lines with ordinary household glue on lucite disks, which are placed in the same projector, superimposing “fire” on the silhouette. Actually, the center projector is two six-lensed machines, each lens covering an arc of some 20 feet, until a complete circle of silhouette is achieved.

The technical details of manipulating the universe are supervised by Fred Raiser, whose worktable is back to back with Favreau’s.

“A real craftsman,” says Favreau of Raiser. “If it were not for him, nothing would be done around here.”

And Raiser, a big man not given too much to talk, says simply of Favreau: “A genius.”

The ideas for new Planetarium extravaganzas are generally hatched upstairs in the office of the curator, Gordon A. Atwater, by the staff scientists. Then Favreau and Raiser are called in and the whole group kicks the idea around a while, after which it is tossed in Favreau’s lap.

“Then,” says the little artist, “Fred and I go down to our cellar and we start fussing. We fuss this way and that, go half crazy trying to figure things out, throw ideas away, get new ones, go crazy again and finally we get it. That’s a thrill, believe me.”

The Planetarium has held 169 different shows since it opened 15 years ago and Favreau worked on 140 of them. He usually works from 70 to 80 hours a week and rarely takes a day off.

The job from which Favreau got the biggest personal kick was a show called “Mysterious Mars.” In that, he came up from his cellar hideaway to play a leading role onstage.

He knocked together some horrendous-looking machines, all phonies, and as the performance began he sat in their midst, pretending to tinker with them.

“Are you ready, professor?” the lecturer called. “Can you take us to Mars?”

“I think something is wrong,” Favreau would reply as he pretended to get electric shocks, “but maybe we can take a chance on it.” He’d fuss around some more and finally the show would start.

Suddenly there would be a flash—another giant flash bulb—and the audience would be told that the Planetarium was so-o-o sorry, but the professor’s machines had blown up.

“The effect was so realistic,” Favreau chuckles, “that a few people walked out in disgust and asked for their money back. One little boy met me in the hall after one show and plaintively asked, ‘Please professor, can’t you make it work? This is the second time I’ve seen the show and you flopped both times!'”

Favreau’s newest miracle gives audiences a ride on a rocket ship as it dips and darts through space past whirling planets. Here’s what an observer sees.

You’re on a rocket-ship landing field. The launching platform is ahead of you. Jutting from the platform is a streamlined rocket, primed for the takeoff. The ship zips upward with a whoosh and, smoke streaming from its tail, disappears into the heavens.

Now the scene shifts and you are aboard the rocket as the planets, first no more than six inches in diameter, move ever closer. Soon they are whirling as you fly past them.

Here’s how Favreau does it. A plaster model of a rocket launching platform and an eight-inch-high rocket ship were first devised. Then, the platform with rocket planted within it, ready to take off, was made. The ingenious cameramen took over from there and made a motion picture of the rocket being launched into space using all miniature props.

When Walter Favreau walks out into the sunshine from his basement hideaway, he feels as small as the rest of us.

Then, after a noonday siesta in the park, the man who plays God trudges slowly back to the catacombs to plot new ways to smash the world. But he does it humbly.