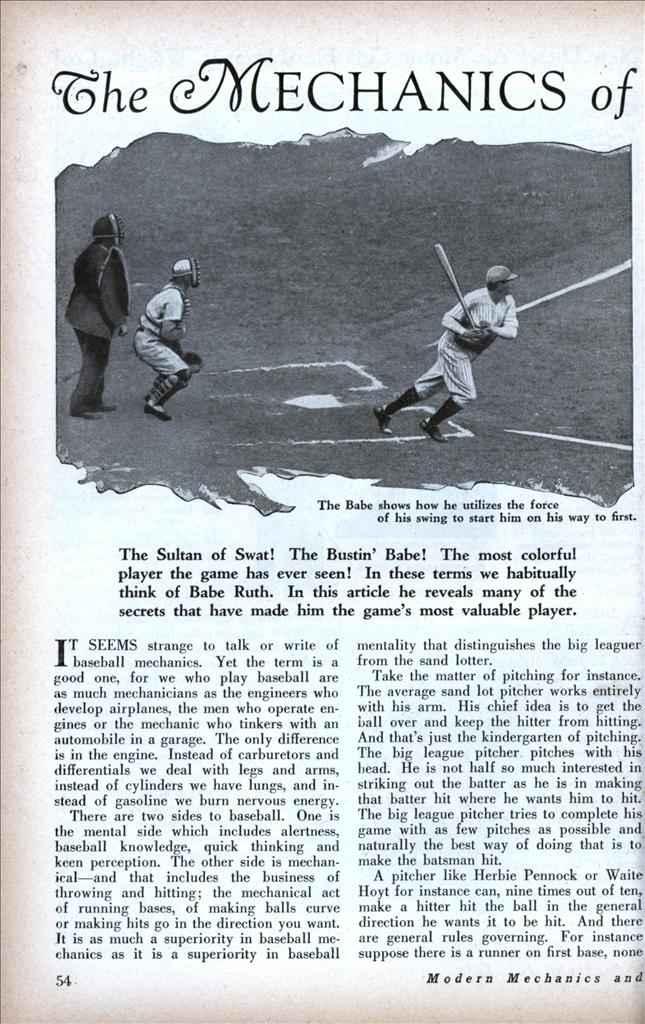 IT SEEMS strange to talk or write of baseball mechanics. Yet the term is a good one, for we who play baseball are as much mechanicians as the engineers who develop airplanes, the men who operate engines or the mechanic who tinkers with an automobile in a garage. The only difference is in the engine. Instead of carburetors and differentials we deal with legs and arms, instead of cylinders we have lungs, and instead of gasoline we burn nervous energy. There are two sides to baseball. One is the mental side which includes alertness, baseball knowledge, quick thinking and keen perception. The other side is mechanical—and that includes the business of throwing and hitting; the mechanical act of running bases, of making balls curve or making hits go in the direction you want. It is as much a superiority in baseball mechanics as it is a superiority in baseball mentality that distinguishes the big leaguer from the sand lotter.

Take the matter of pitching for instance. The average sand lot pitcher works entirely with his arm. His chief idea is to get the ball over and keep the hitter from hitting. And that’s just the kindergarten of pitching. The big league pitcher pitches with his head. He is not half so much interested in striking out the batter as he is in making that batter hit where he wants him to hit. The big league pitcher tries to complete his game with as few pitches as possible and naturally the best way of doing that is to make the batsman hit.

A pitcher like Herbie Pennock or Waite Hoyt for instance can, nine times out of ten, make a hitter hit the ball in the general direction he wants it to be hit. And there are general rules governing. For instance suppose there is a runner on first base, none out and the score is tied. The natural play for the hitter then is a sacrifice which will get the runner to second and put him in scoring position. The pitcher’s job is to stop that sacrifice and the green sand lotter nine times out of ten will either pitch a waste hall or try to fool the hitter with a curve. But not the big leaguer. No indeed. He pitches a fast ball high and inside knowing that such a pitch is the hardest ball in the world to bunt.

There are other rules, too.

Fans frequently asked me how a pitcher knows what to pitch to a given hitter. Until you’ve pitched to a hitter once or twice and know his style that’s a hard thing to answer. There are some general rules however even for that. If the hitter holds his bat rested on his shoulder, standing loosely at the plate, a fast ball inside is apt to be the best pitch. If he stands far back from the plate and is inclined to step away on his swing, then a curve ball on the outside is apt to be the medicine.

Here’s another tip to young pitchers. Every pitcher who ever pitched a ball game has his favorite pitch. Perhaps it’s a fast ball. Perhaps it’s an overhand curve, perhaps it’s a side arm curve. (The one we used “to call an out-shoot when we were kids.) The young inexperienced pitcher pitches that pet of his every other pitch until opposing hitters lay for it. The real pitcher uses his “pet” only when he’s in a hole*—saving it up until he really needs it. Then it’s worth something.

Take Herbie Pennock for instance. Pennock’s best pitch is an overhand curve that breaks down and out. He may go for three or four innings without showing it once. But when he gets in a hole —when he has to make sure of the hitter and wants him to hit the best he has— then he comes in there with that overhand curve.

A lot of people seem to think that because a pitcher is in the tig leagues and winning ball games he must have something wonderful in the way of “stuff.” That’s not always true. I’ve seen sandlot pitchers who were just as fast and had just as much break on their curve ball as any big leaguer. But they don’t know how to pitch. Nine-tenths of pitching success is control and the ability to “mix ’em up.” No pitcher can get by on one thing alone, whether it be a fast one or a curve or a slow one. But a pitcher who has good control and knows how to pitch can get by with very little stuff on the ball.

In this connection I always think of the late Urban Shocker who was with St. Louis and the Yankees for so many years. As a young fellow Shocker had a lot of stuff but during his later years he got by on his head alone. His curve ball, as he used to say himself, “was just a wrinkle,” and his fast one wouldn’t sting much if you caught it with your bare hands. But he was a great pitcher just the same—because he had perfect control and could put that ball right where he wanted it.

Control, you know, consists in something more than merely getting the ball over the plate. Good control means the ability to hit a catcher’s glove, wherever he holds it, in fourteen tries out of fifteen. And there’s only one way to get it. That’s to practice and practice some more. Old timers like Pennock or Bob Shawkey or Walter Johnson or fellows like that never pitch a ball that they’re not throwing to a target. If you watch them when they warm up before a game you’ll see what I mean. Young pitchers just always around the corners, never giving the hitter a good hall to hit at. You know the toughest pitch in the world for a hitter is a ball that’s so far outside, or inside, so low or so high that you can’t quite get hold of it and yet one that you know will be called a strike if you let it go by.

Anybody can throw a curve ball. If you grip the ball firmly and let it roll out over the side of your fingers when you deliver it, the thing is bound to curve. Natural twist and gravity will take care of that. But the real curve, the sort that gets by in the big leagues, must be sharp breaking and quick and that sort of curve is obtained only by a quick snap of the wrist at the time the ball is delivered. The quick snap of the wrist gives the ball the added twist that makes it break quickly. And every pitcher knows that it’s not the width of the curve that fools the hitter so much as it is the quickness of the break. The old round house curve that breaks^ eighteen or twenty inches is a lot easier to hit than the fast breaking curve that breaks only two or three inches. i

Yet a curve ball alone, no matter how good, doesn’t make a pitcher. The best curve ball I ever looked at was possessed by Walter Beall, and he couldn’t even make the big league grade. He had all the stuff you’d want to see. His fast ball zipped down there with a great hop and his curve ball was almost unhittable. But he couldn’t get control —and as I said before, control is the biggest single item in pitching success.

Maybe you’d be interested in a word about the mechanics of hitting. The poor hitter can improve his hitting if he’ll work at it. The first secret of successful hitting is complete relaxation. That sounds funny but it’s true. You’ve got to stand up there at the plate naturally with your muscles relaxed and ready to move in any direction. Despite the fact that I get paid for hitting home runs, I think it’s a mistake for the kid player to attempt distance hitting. The minute you try to drive that ball for long distances you press, and in baseball as in golf, pressing is bad business. Nor does it pay to take too long a swing. Ever since the home run became so advertised ball players have had a tendency to grab their bat at the end and take a swing from the heels at every pitch. That’s bad. They’re thrown off balance and as a result are suckers for any sort of change of pace. The ideal batting type, according to my way of thinking, is the style used by such hitters as Ty Cobb, Joey Sewell, Eddie Collins and Earl Combs. Here are hitters who hit any type of pitching and the reason they hit so well is that they are constantly on balance. They choke their bats, take a shorter swing and stand flat footed at the plate. Being constantly on balance they can wait until the ball is almost .on them before they start their swing and the result is they are less likely to be fooled by curves or slow ones. In my own case for instance, where I have to take a long swing and consequently must start my swing with the pitch, I’m more likely to be fooled. You can look over the big league strikeout records each year and without any further evidence you can separate the long full swingers from the “poke” hitters. The swingers are the strikeout victims. The other fellows may not hit many home runs, but they’re always in there hitting that ball.

One other thing about hitting. Don’t try to kill the ball. Just try to meet it squarely. A bunt, you know, if it can’t be fielded, is a lot better than a long fly ball that the outfielder gets under. The perfect hit is the line ball that zips over the heads of the infielders and lands inside the range of the outfielders. Just remember that if you get your percentage of hits like that the home runs can run for Sweeney. And don’t press Take it easy! Relax! Choke your bat! Don’t be over-anxious. And above all else don’t swing at the bad ones.