Modern Mechanix
Issue: May, 1931
Posted in: Animals For Profit
Tags: Clyde Beatty, lions
1 Comment on The Mechanics of Lion Taming (May, 1931) 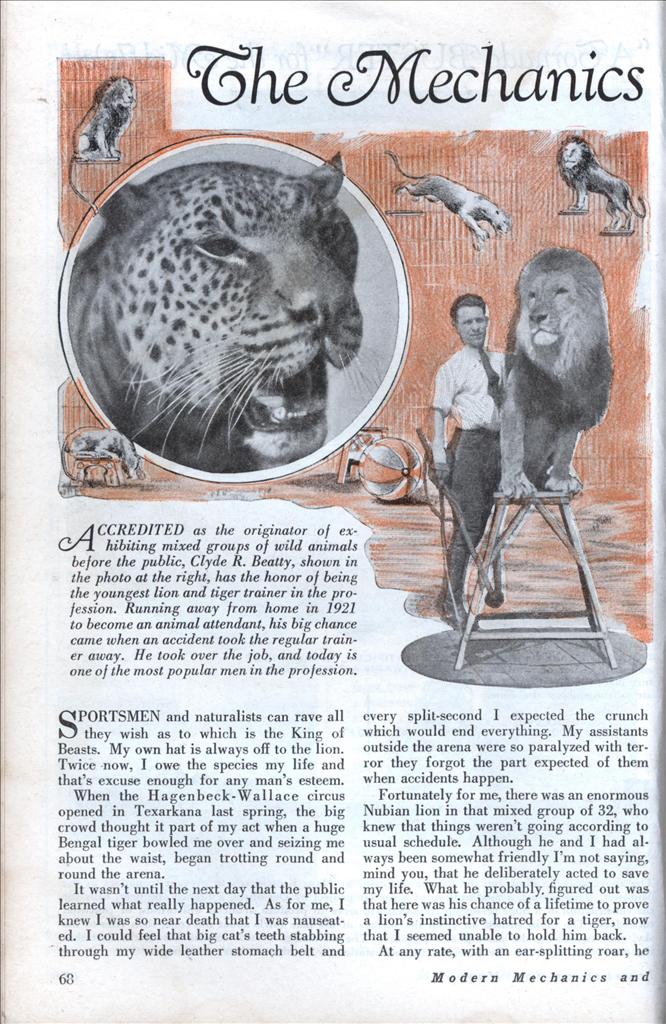 The Mechanics of Lion Taming

Why is the gun used by lion tamers loaded with blank cartridges — and why are trainers careful never to strike their charges with their whips? A famous animal trainer tells you all about it in this stirring article.

ACCREDITED as the originator of exhibiting mixed groups of wild animals before the public, Clyde R. Beatty, shown in the photo at the right, has the honor of being the youngest lion and tiger trainer in the profession. Running away from home in 1921 to become an animal attendant, his big chance came when an accident took the regular trainer away. He took over the job, and today is one of the most popular men in the profession.

SPORTSMEN and naturalists can rave all they wish as to which is the King of Beasts. My own hat is always off to the lion. Twice now, I owe the species my life and that’s excuse enough for any man’s esteem.

When the Hagenbeck-Wallace circus opened in Texarkana last spring, the big crowd thought it part of my act when a huge Bengal tiger bowled me over and seizing me about the waist, began trotting round and round the arena.

It wasn’t until the next day that the public learned what really happened. As for me, I knew I was so near death that I was nauseated. I could feel that big cat’s teeth stabbing through my wide leather stomach belt and every split-second I expected the crunch which would end everything. My assistants outside the arena were so paralyzed with terror they forgot the part expected of them when accidents happen.

Fortunately for me, there was an enormous Nubian lion in that mixed group of 32, who knew that things weren’t going according to usual schedule. Although he and I had always been somewhat friendly I’m not saying, mind you, that he deliberately acted to save my life. What he probably, figured out was that here was his chance of a lifetime to prove a lion’s instinctive hatred for a tiger, now that I seemed unable to hold him back.

At any rate, with an ear-splitting roar, he launched down from his pedestal and landed fair and square on the cat’s back. The tiger dropped me instantly and turned to defend itself. What a fight followed!

Stunned and badly wounded, I cowered on the floor while those two maddened beasts clawed, slashed and tore at each other with my body under their flying feet. Over and again, their terrible claws punctured me as they sought to keep their footing.

Fortunately for me, the tiger suddenly gave way before the lion’s terrific attack. Somehow I staggered to my feet and drove them to their respective runways which my panic-stricken attendants suddenly remembered to open. Then I herded the other thir- ty animals out of the arena and collapsed before the door. My helpers dragged me out and hustled me off to the hospital where 1 spent the next two weeks.

I’ll carry the scars of that adventure until I die.” So will the tiger, for the Nubian had nearly killed him before I was able to get up and whip them apart. It has always been a miracle to me that the entire group didn’t participate in one grand free-for-all while I lay helpless on the floor.

Explaining how lion and tiger are trained isn’t an easy thing because there aren’t any trade secrets to divulge. It’s just a matter of being foolish enough to walk in with them and daring them not to attack you as they naturally prefer to do. Making them jump up on pedestals or through hoops or do any’ of the other stunts is largely a matter of persistent trying and no end of patience. Unlike a dog, they aren’t eager to please any man and their seeming obedience is largely rendered because they wonder what would happen if they didn’t obey.

The big thing, of course, is to make them let you alone. Nature ingrained them with a hatred and suspicion for man and that animosity takes one of two channels—they either want to attack you or else run away. Their reaction to your command isn’t the willingness of a horse to “giddap” or “whoa”— rather it is the reluctant submission of brute-strength to human will-power. Their fear, as it were, of what might happen if they didn’t do what was asked of them.

That fear, however, is a laughable thing when you analyze it and if they only knew the truth no trainer’s life would be. safe. The whip he carries is no weapon at all and in case of a showdown, utterly useless to repel a beast capable of a mighty spring which would knock a horse down. But it makes a lovely “crack!” when handled right and suggests unknown possibilities to a furtive-minded animal.

Nothing could be more absurd and harm- really helpless. To inflict any sort of pain while alone in an arena would be to tempt Providence itself. The very pistol we carry is always loaded with blanks and if fired in the face of an angry animal, is more apt to prove a spur than a deterrent.

My own assistants are carefully coached never to enter the arena itself in case of mishap or accident to me. They can serve me best from the outside by flinging open the runway gates leading back to the pens and attempting to drive the animals out of the arena. It is a circus “law” that the trainer stands on his own legs when he enters a cage or the arena.

I have encountered a few members of the cat family who really went out of their way to be friendly and half-affectionate. But their moods are not to be trusted and unfortunately, they have no realization of their strength. Thus, their enthusiasm is more to be feared than downright anger. Any cat can bowl a man over with a flip of his tail and even a friendly tap from their mighty paws would splinter wood. Their claws are horribly sharp and hawk-like in action whenever they encounter soft flesh. If they were to draw a single drop of blood in a moment of friendly exuberance, tragedy might quickly follow, for the smell awakens their primitive instincts.

It was a friendly scuffle with a young cub lion that nearly cost the life of Charles Gay, owner of the famous California lion farm. The cub enthusiastically cuffed at him and entangled a claw in Gay’s bootlace. In an effort to extricate it, he sank the claw into the calf and blood streamed out. In an instant, the friendly beast became a raging, carnivorous animal. Gay spent weeks in the hospital.

My own first accident with lions was largely the result of too much faith in the friendliness of an especially fine Nubian lion. In the group I happened to be working that day, was a lioness who suddenly came in season. She remained beautifully aloof to his sudden advances and it angered him to the point where he vented his ire on me.

Knocking me down, he nearly tore my right arm off and his big teeth punctured it through and through. Things looked like the end for me when suddenly that lioness took it in her head to play the coquette. She leaped down from her pedestal and started to cavort around him as he was chewing at me. That excited him so he turned away and I did a nose-dive for the door. That was at Kokomo in 1925 and put me abed for a long siege.

Exhibiting mixed groups of animals in an arena is one of the toughest and most dangerous jobs we trainers do and I’ve about concluded never to work such an act again. The public neither appreciates nor understands the truly great risk we run and because it is their plaudits I am after, I’ve come to some definite conclusions about preserving my skin hereafter.

The lion and tiger are natural enemies and making them work peacefully together is exactly like trying to keep dynamite and a percussion cap from exploding. Throw in some leopards, a few panther and a bear or two into one enclosure and you’ve got all the natural makings for a better rough-house than any Irishman could ever want. The very air in the arena crackles with hatreds when such a mixed group is driven in.

Circus men said it couldn’t be done when I first tackled the stunt back in ’23. Well, I didn’t know what would happen myself when I tried the stunt out at the training quarters. All I knew was that I wanted to give the public a big thrill, and I certainly got one myself when they shoved a few lions and tigers in with me. Of course, I chose well- trained animals whose dispositions were better than the average for the first experiment. But at that, I had my hands full that day and I’ve had them full every time I have worked the stunt since. You can imagine my feelings when I added leopard and bear later on!

There are no vacations to speak of in our profession. All the year round I must keep in close association with the animals I work. Their memories are too short and their moods too variable. They must be put through their paces as often as possible for lengthy letdowns are dangerous. It is only during stormy weather that I can relax and take things easy. The approach of a storm makes them restless and uneasy and their high-strung nature won’t permit intimate contacts then.

An animal trainer’s first consideration must always be for the safety of the spectators watching his act. This is another reason why the revolver I carry in my act is loaded with blank cartridges. Supposing a tiger were to charge me, and I fired a bullet at him. In the first place, it is extremely unlikely that the lead slug would have the effect of stopping the animal in his tracks before he could maul me. A case, not at all unusual, is on record where a tiger, carrying seven heavy bullets in his body through vital spots, ran for fifty yards before dropping. So you can see why a blank shot, with its frightening concussion, is just as effective for a trainer as a real bullet.

But, to get back to the story, supose I did fire that bullet, and it went wild and struck some member of the audience in the closely-packed circus tent. By any sense of justice, ‘the animal trainer who has lost control of his charges is the one who should pay the penalty, not some innocent bystander. It is part of the odds the trainer accepts when he steps into the cage.

I may flirt with death a bit oftener than the average man but there is one nice thing about “cat” training—insurance men never pester me to death!