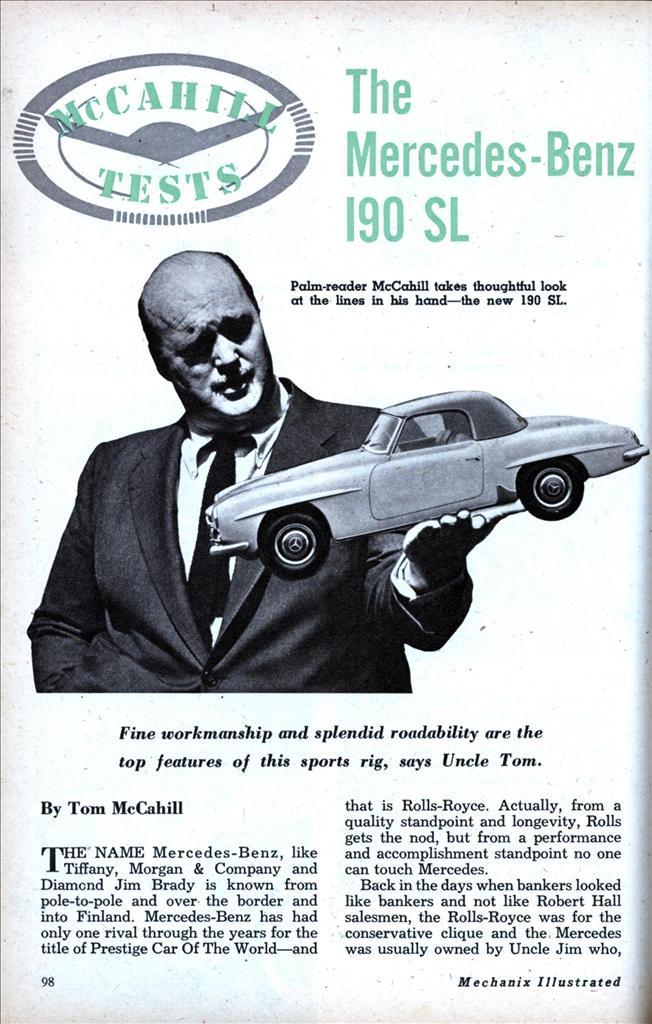 Back in the days when bankers looked like bankers and not like Robert Hall salesmen, the Rolls-Royce was for the conservative clique and the Mercedes was usually owned by Uncle Jim who, though nice, was considered a little swift. The fact was that Jim had a few more corpuscles than the average blue-blood who had the dough but was afraid of soiling the white piping on his dark vest. The Mercedes was always a man’s car.

After World War II, Mercedes was quick to make a full-bore comeback, not only in competition but in the production of passenger cars. However, this was accompanied by a few irksome qualities not considered good automotive merchandising practice. For example, the 190 SL and the 300 SL created sensations when first introduced but some of the first customers to order these cars were approaching senility before they took delivery, which unaccountably was delayed by many months —in fact, more than a year in the case of the 190 SL.

As if this weren’t bad enough, the cars didn’t come up to their original billing, performance-wise. The famed 300 SL that was supposed to turn a sizzling 160 mph failed to reach 135. at Daytona Beach and the Thunderbirds trimmed them handily in the 1955 acceleration runs. These original 300 SL’s were supposed to be almost carbon copies of the cars that won the ’52 Le Mans race (because the leading Talbot ran out of oil with less than an .hour to go) but they were a far dry from these team cars. They were heavy and the fuel injection systems had more bugs than a 30-cent flophouse. Today, these troubles have been solved. They are excellent cars but let’s not overlook the fact that Mercedes of old would have delivered cars in top shape right from the beginning.

The 190 SL, originally touted as a 125-mph bomb, took many, many months to get into production. When it did arrive, it had Carburetion trouble and couldn’t do 125 off the George Washington Bridge. Somewhere between Germany and New York it seems there had been a total misunderstanding of the type of fuel available in the States. If the importers had taken a few buckets full of our high-test stuff for the boys at Stuttgart to play with, a lot of unhappiness to original owners might have been avoided. Now these bugs in the 190 SL have been ironed out—so what have we got?

During the first few months of the 190 SL’s original introduction in this country I received a,number of letters from disappointed owners. One owner, Dr. Vaughn Mason of Yonkers, N. Y., wrote and offered me his car for test, when and if he ever got it running right. Just before leaving for Florida I decided to phone Dr. Mason, as several months had elapsed since his letter, to ask how his 190 was now running. “Okay,” he told me, so I asked him to bring it over and he did. Hereby hangs a tale: Unsatisfied with the performance he was getting, he had taken the car to Master Mechanic Maeder at Zumbach Motors. Maeder went to work on the carburetor and really did a job because the acceleration of Mason’s car is a lot hotter than any other of the original 190 SL’s—and acceleration had not been their long suit. For example, 0-60 on the Mason 190 SL averages 10.6 seconds, where Mercedes of the first lot ran closer to 13. The latest 190’s all have new-type carburetors and boast acceleration which compares closely with the times I got with Mason’s car—far superior to the original offerings. Top speed is now upped from an average of 101 on the initial models to around 104-107 with the latest carburetor.

These cars are among the finest road-holding, road-feeling Mercedes-Benzes ever produced and are actually superior to the more expensive 300 SL in this department. John Fitch, member of the Mercedes race team, paid me a visit recently and told me that when the Mercedes team went to Italy for the Targa Florio their practice cars were 300 SL’s and one 190 SL. All the team members fought for the 190 SL because it was so much nicer to handle on this rugged course and so much more fun. They found that due to the terrific roadability of this car their actual practice lap time was amazingly close to the much more powerful and swifter 300.

Incidentally, here’s a side note showing the strange quirks that fate has a way of playing: Pierre Levegh, whose Mercedes killed so many people at Le Mans in ’55 in the worst auto disaster in history, was John Fitch’s driving partner. Ten minutes before the start of the Le Mans race they hadn’t decided which one would start. If the selection had been Fitch—well, no two men in the world drive alike and Fitch would most likely have been ahead of or behind the spot where Levegh’s car was when it hit the swerving Austin-Healey, causing the Mercedes to catapult off the track. Fitch was due to take over the car in another two laps.

The finish of the 190 SL, right down to its leather-lined glove compartment hinge to its easy-to-put-up, no-thumbs-lost top, has all the markings of true craftsmanship. The four-speed synchromesh transmission is as smooth as the fuzz on a duckling’s head and the two bucket seats are as comfortable as being fanned by harem girls while soaking in a bubble bath. Like all Mercedes, the steering is a little firm but not unpleasantly so. When you cut for a bend or hard curve you know where the bite is, where it’s solid, direct and to the point. The little four-cylinder engine with its 105 foot-pounds of torque gives the impression of having double that, especially in dig. The actual operation of the engine is so smooth that it’s impossible to tell whether it has six, eight or four cylinders.

The real pleasure of this car came to me in my cornering tests. Around a dust-gravel bend at fairly good speed I could hold it to absolute negligible drift with no plowing whatsoever, or I could break the tail away and go into a full slide with the slightest wheel twist, then get it back on course again with just a snap of the wheel. Over rutted roads this car tracked with all the straightness of a bullet shot from a Springfield rifle.

Now we come to What Is It? and Is It A Good Buy? We can tell you what it is but you’re the guy who must decide whether it’s a good buy for you as there are many sports cars available in this price bracket. This little Mercedes, fully equipped, sells for close to $4,200 in New York. Here is a car with fantastic quality of workmanship where the smallest details of finish reflect the pride of the oldest automobile maker in the world today.

When Pall Mall de Peyster asks you what you are driving and you nonchalantly flick your cigar ash and answer “Mercedes-Benz” that’s similar to saying you’ve just been given self-service privileges at the Chase Bank. At roughly the same figures, a Thunderbird or Corvette would kill it, performance-wise, in normal road travel. But the name Thunderbird or Corvette fails to have the magic sound of Mercedes-Benz. That one has a way of raising goose pimples on all men from the Theda Bara set to fuzzy-cheeked kids in prep school. The name is a lot more important than people think. Webster could use it under the definition of “intrigue.” It’s associated with E. Phillips Oppenheim’s stories of the Riviera and dark nights roaring away from Polly’s. To say you own a Mercedes-Benz makes you stand out in a crowd like a bull moose at a prayer meeting. In summing up, this is a fine little car and one that’ll appeal especially to the connoisseur who likes to get his Zippos in a Tiffany box. It is a good conversation piece and a professional snob can have a real ball with it. It is able, within its limitations, and quite handsome in a Teutonic sort of way. This would make an excellent rally car. In fact, this is what it is best suited for. Knowing this, Mercedes pulled a major goof: the odometer has no tenths dial and merely measures in round miles. For rally work this makes it as impossible as trying to conduct a swimming race without water. Mason, who uses his car in rallies, had to cannibalize an Austin-Healey speedometer and mount it under the dash because it does have tenths readings. If you’re in the market for a sports car but are not interested in racing, hill climbing or drag events, you might look the 190 SL over. Joe Blow up the block with his ‘Bird will blow you off anytime he catches you loose—but then he can’t say “Mercedes-Benz” when you both reach the corner saloon. •