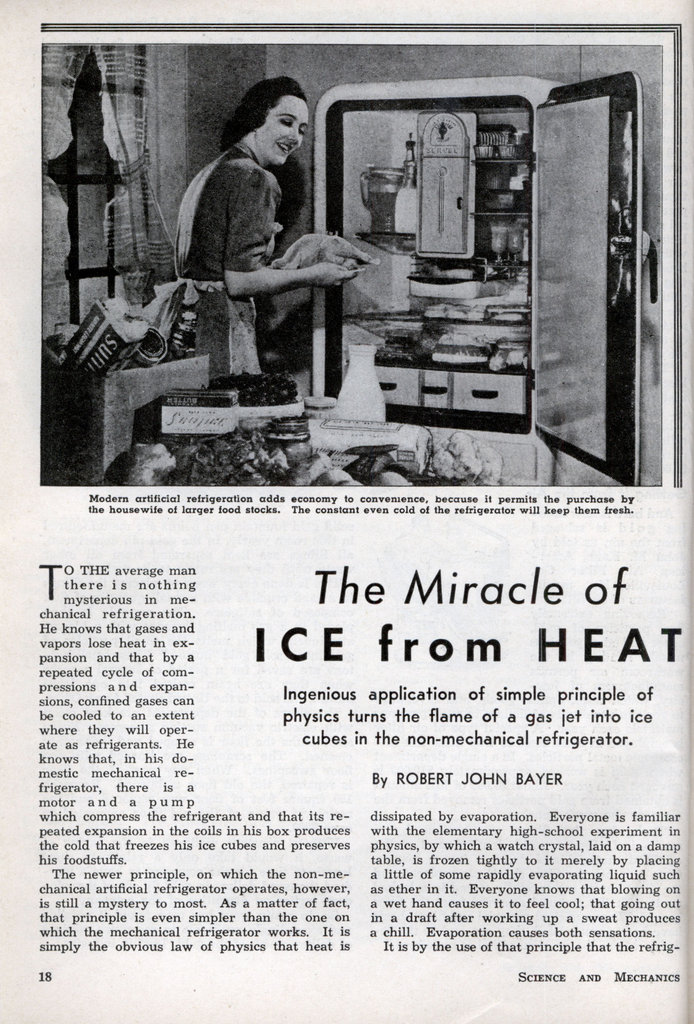 The newer principle, on which the non-mechanical artificial refrigerator operates, however, is still a mystery to most. As a matter of fact, that principle is even simpler than the one on which the mechanical refrigerator works. It is simply the obvious law of physics that heat is dissipated by evaporation. Everyone is familiar with the elementary high-school experiment in physics, by which a watch crystal, laid on a damp table, is frozen tightly to it merely by placing a little of some rapidly evaporating liquid such as ether in it. Everyone knows that blowing on a wet hand causes it to feel cool; that going out in a draft after working up a sweat produces a chill. Evaporation causes both sensations. It is by the use of that principle that the refrigerator is made to work without moving machinery of any kind. The liquid used in such a refrigerator is not ether as in the watch crystal, or water as on the hand, but ammonia. Originally, alcohol was used, but ammonia has been found better and more efficient for the purpose. Instead of a draft of air to evaporate the ammonia, the refrigerator uses a current of hydrogen, because hydrogen, being much lighter than air, is a much better evaporating material.

Obviously, however, to operate such a piece of equipment would be impractical. It would also be expensive, because once the evaporated alcohol had passed out of the coil it would be lost. The first step in the practical process, therefore, is to reclaim the alcohol, which is done in the commercial refrigerators by means of an absorber which washes the alcohol out of the vapor and precipitates it in a mixture of water, as in Figure 2.

It has been said, however, that hydrogen is a much more efficient gas in which to do the evaporating than air. It is not as free or inexpensive as air, however, so that a closed circuit must be provided for it. In the practical refrigerator, after the alcohol has been washed out of the mixture with water, the hydrogen is re-conveyed to the start of the circuit, as shown in Figure 3. This action is automatic, because the mixture of alcohol and hydrogen is heavier than the hydrogen alone. Hence, the mixture tends to flow down into the absorber, and the released hydrogen tends to rise again to the beginning of the circuit.

This elementary circuit, however, does still not provide for the re-use of the alcohol, which remains at the bottom of the absorber diluted with water. Nor does it provide for re-using the water. To take care of these important functions, the designers of the non-mechanical refrigerator have made use of the principle of the coffee percolator. The solution of alcohol and water is drawn off from the bottom of the absorber into a receptacle where heat is applied. This separates the alcohol from the water, in the form of vapor, and the pressure of the vapor raises the water to a level where it can flow back again into the absorber to perform again its function of washing the alcohol out of its mixture with hydrogen. The alcohol vapor, meanwhile, rises because of its lightness into an air-cooled condenser, from which, joining the rising hydrogen from the absorber, it flows again into the beginning of the circuit. The operation is shown in Figure 4.

One more piece of equipment is needed to make the non-mechanical refrigerator practical. That is a method of cooling the absorber, which becomes heated from the dissolving of the alcohol. This is provided by a cooling coil around the absorber, containing a small portion of evaporated liquid. This circulates through an air cooler provided with fins, much like the alcohol condenser. A phantom view of the entire assembly is shown in Figure 5.

It will be seen that the only outside source of energy required to keep the cycle in operation, is the heat necessary to operate the water-alcohol “percolator.” In practice, this is usually applied with a small domestic gas flame, although an electrical heating unit may also be used. To guard against continuous operation of the refrigerator, which would soon freeze all the food in the refrigerator into solid icy masses, a thermostat control is provided. The bulb of this is placed near the refrigerating coils and the tube runs down to an expanding diaphragm in a valve which regulates the flow of domestic gas to the burner under the “percolator.” By setting the dial of the thermostat to the desired temperature, the gas flame is constantly regulated to maintain the temperature of the cooling box within the limits of a few degrees. Accidental quenching of the flame automatically shuts off the gas supply, so that no injury or explosion may result. This is a safety feature.

While this description of the operation of the non-mechanical refrigerator is based on the use of alcohol as a refrigerant, as has been said earlier, ammonia is the liquid used. Less of it is required than alcohol, so that the assembly may be made simpler and more compact. On the other hand, because a higher pressure is required to condense ammonia, the liquid must be introduced under pressure into the circuit which is then tightly sealed at the factory. This assembly requires special tools for servicing.