It’s not too often you see a phrase like “meat-and-gravy man” repeated more than once in an ad. 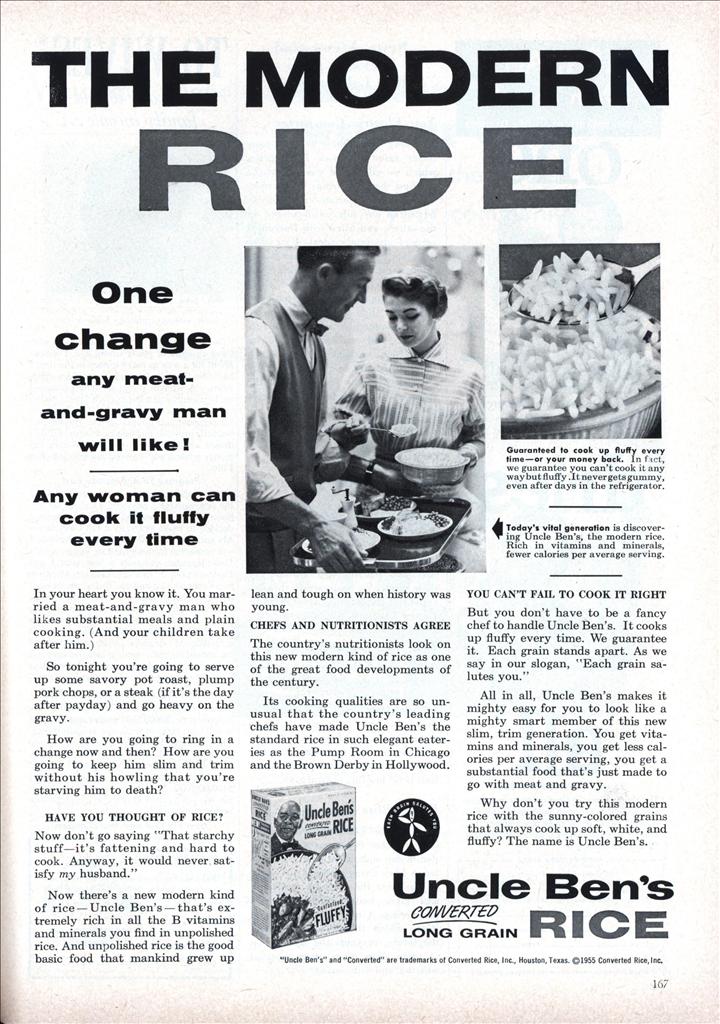 Any woman can cook it fluffy every time

In your heart you know it. You married a meat-and-gravy man who likes substantial meals and plain cooking. (And your children take after him.) So tonight you’re going to serve up some savory pot roast, plump pork chops, or a steak (if it’s the day after payday) and go heavy on the gravy.

HAVE YOU THOUGHT OF RICE?

Now don’t go saying “That starchy stuff—it’s fattening and hard to cook. Anyway, it would never satisfy my husband.”

Now there’s a new modern kind of rice — Uncle Ben’s — that’s extremely rich in all the B vitamins and minerals you find in unpolished rice. And unpolished rice is the good basic food that mankind grew up lean and tough on when history was young.

CHEFS AND NUTRITIONISTS AGREE The country’s nutritionists look on this new modern kind of rice as one of the great food developments of the century.

Its cooking qualities are so unusual that the country’s leading chefs have made Uncle Ben’s the standard rice in such elegant eateries as the Pump Room in Chicago and the Brown Derby in Hollywood.

YOU CAN’T FAIL TO COOK IT RIGHT But you don’t have to be a fancy chef to handle Uncle Ben’s. It cooks up fluffy every time. We guarantee it. Each grain stands apart. As we say in our slogan, “Each grain salutes you.”

All in all, Uncle Ben’s makes it mighty easy for you to look like a mighty smart member of this new slim, trim generation. You get vitamins and minerals, you get less calories per average serving, you get a substantial food that’s just made to go with meat and gravy.

Why don’t you try this modern rice with the sunny-colored grains that always cook up soft, white, and fluffy? The name is Uncle Ben’s.