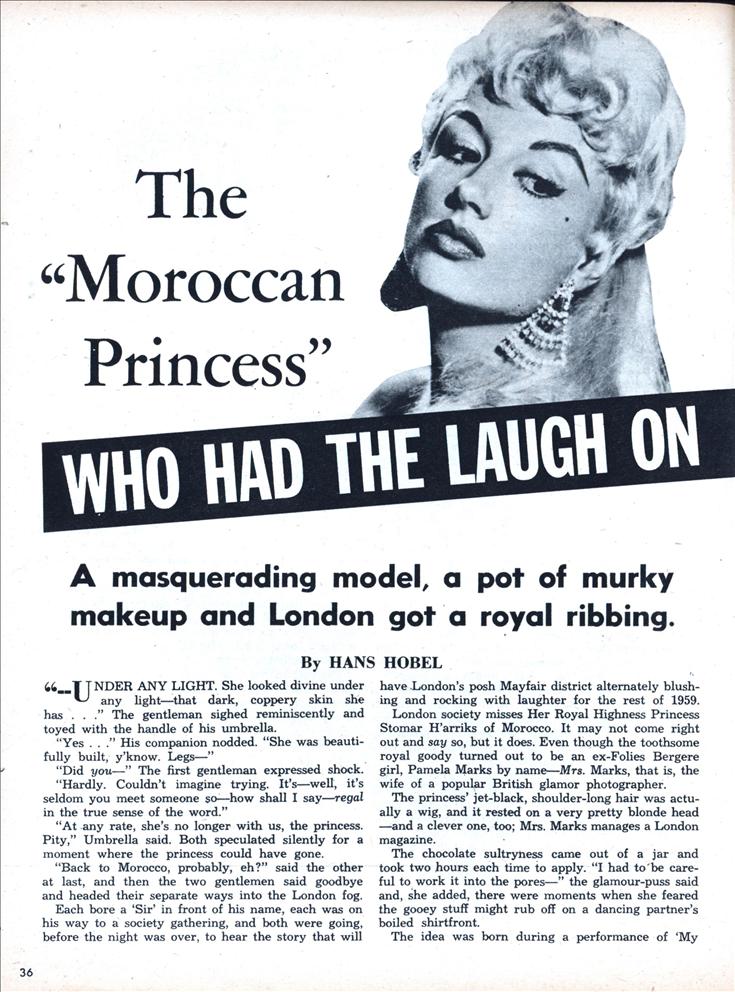 “Back to Morocco, probably, eh?” said the other at last, and then the two gentlemen said goodbye and headed their separate ways into the London fog.

Each bore a ‘Sir’ in front of his name, each was on his way to a society gathering, and both were going, before the night was over, to hear the story that will have London’s posh Mayfair district alternately blushing and rocking with laughter for the rest of 1959.

London society misses Her Royal Highness Princess Stomar H’arriks of Morocco. It may not come right out and say so, but it does. Even though the toothsome royal goody turned out to be an ex-Folies Bergere girl, Pamela Marks by name—Mrs. Marks, that is, the wife of a popular British glamor photographer.

The princess’ jet-black, shoulder-long hair was actually a wig, and it rested on a very pretty blonde head —and a clever one, too; Mrs. Marks manages a London magazine.

The chocolate sultryness came out of a jar and took two hours each time to apply. “I had to be careful to work it into the pores—” the glamour-puss said and, she added, there were moments when she feared the gooey stuff might rub off on a dancing partner’s boiled shirtfront.

The idea was born during a performance of ‘My Fair Lady’—the scene where speech expert Professor Henry Higgins succeeds in passing off his pupil, Eliza Doolittle, a former Cockney flower girl, as a bona-fide lady. Our Pamela had been posing as a Moroccan girl for her husband. Said a friend, seeing a picture, “Let’s see if we can put it over—just like Eliza.”

London’s elite is used to strange names; people had no difficulty at all with Pam’s unpronounceable mouthful of pseudonym. Her first appearance was a smashing success and demands for encores began to fill the mailbox. She carried off the role beautifully.

It wasn’t easy. First, there was the business of the makeup. If putting it on was a chore, removing it after each appearance was worse. Three baths it took, “— and I had to scrub very hard. I sometimes got quite sore.”

The wig was a major headache. The thing didn’t want to stay on, and her attempts to keep it from settling rakishly over one eye probably played no small part in making for a stately and regal carriage.

But Princess Stomar H’arriks worst moments by far occurred each time a dark-skinned gentleman in robes rustled over—any Mid-Easterner could have been a Moroccan, and how was a girl to know how the men dressed?

The denouement, when it came, wasn’t that exciting at all. No sheik or sultan recognized in the princess a runaway from the harem; no deposed king thought he espied a one-time playmate.

It just happened that a family friend of the Marks’ showed up at one of the parties.

And called Pamela by name.