Mechanix Illustrated
Issue: Jan, 1951
Posted in: War
Tags: radioactivity
5 Comments on The Most Important 30 Minutes of Your Life (Jan, 1951) 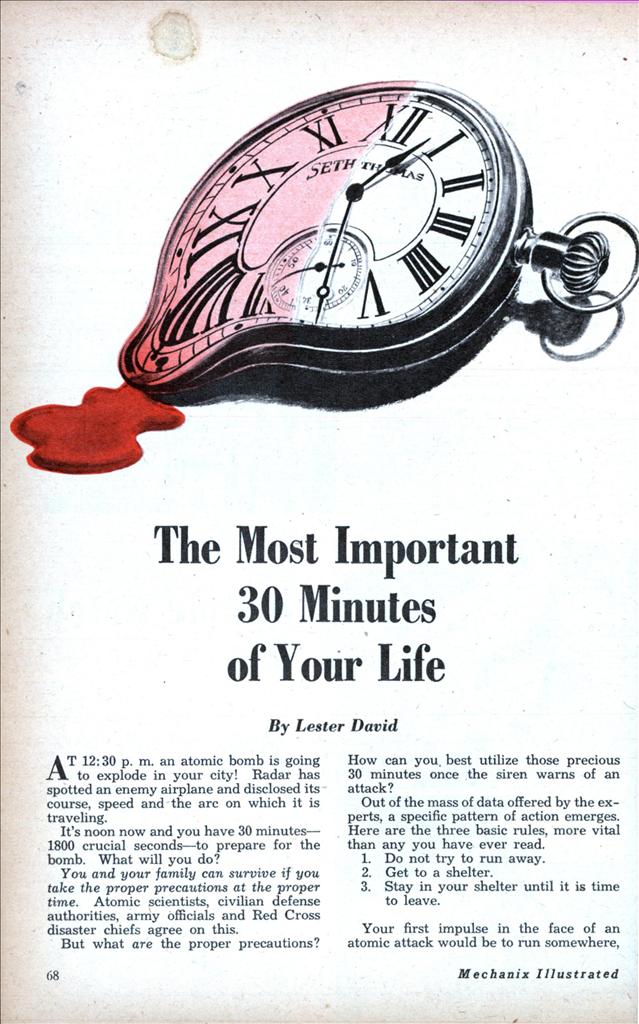 The Most Important 30 Minutes of Your Life

AT 12:30 p. m. an atomic bomb is going . to explode in your city! Radar has spotted an enemy airplane and disclosed its course, speed and the arc on which it is traveling.

It’s noon now and you have 30 minutes— 1800 crucial seconds—to prepare for the bomb. What will you do?

You and your family can survive if you take the proper precautions at the proper time. Atomic scientists, civilian defense authorities, army officials and Red Cross disaster chiefs agree on this.

But what are the proper precautions?

How can you. best utilize those precious 30 minutes once the siren warns of an attack?

Out of the mass of data offered by the experts, a specific pattern of action emerges. Here are the three basic rules, more vital than any you have ever read.

3. Stay in your shelter until it is time to leave.

Your first impulse in the face of an atomic attack would be to run somewhere, as far and as fast as possible. But it won’t help—first, because you couldn’t get far enough away to be any safer; second, because the resultant stampede would endanger everyone’s life and impede rescue efforts by clogging roads at the very time when they should be free. How far and how fast can you go during a simple holiday traffic jam? Multiply that a thousand times and take stock.

Therefore the first rule: Do not try to run away.

Shelters can protect you from the four deadly horsemen of the atomic bomb— blast, heat flash, gamma radiation and falling debris—if they are thick enough and far enough from the scene of the explosion.

The U. S. Strategic Bombing Survey No. 5 undertaken by the U. S. Air Force, states flatly: “The most instructive fact at Nagasaki was the survival of the few hundred people who were properly placed in tunnel shelters. Without question, shelters can protect those who get to them against anything but a direct hit.”

The best protection from shock, radiation and heat is reinforced concrete; almost as good is closely packed earth. The thickness required to protect you fully depends, obviously, on the distance from the blast. How much protection and at what distances? Well many other factors influence the effect of an atomic blast, including height of the burst, direction of the blast and types of buildings in its path. The government handbook, The Effects of Atomic Weapons, estimates that at a half-mile from the explosion, a 12-inch reinforced concrete wall inside a building would provide enough protection.

The following thicknesses of concrete or closely packed earth will prevent death by radiation: inches of inches of distance concrete earth from blast 26 43 1,500 feet 22 37 2,000 feet 12 20 3,000 feet 2 3 4,000 feet Shelters should be located in fireproof, reinforced concrete or steel frame buildings that are resistant to collapse. They should be on lower floors, in basements, halls or in the interiors. Outside shelters should be located well clear of buildings to avoid falling debris and fire.

The British government recommends construction of raid shelters on the order of the Anderson-type, built outside many British homes during the Hitler blitz. These were steel arches, six feet high and four-and-a-half feet wide, half buried in the ground. Civil defense authorities assert that if three feet of earth were piled above the arch, the shelter could protect all inside from the four main causes of death and injury. So, the second rule: Get to a shelter.

Don’t be in a rush to emerge from your hideout—stay there until you have been assured the bomb will not be dropped, long enough for radiation outside to wear off.

How long should you wait? Fifteen minutes after the blast there is about one-fifteenth the amount of radio activity which existed a minute after the explosion. After an hour it diminishes to one-sixtieth.

Don’t get into an unreasoning panic about radioactivity. The human body can absorb a great deal of it without serious injury. Imme diately after the Bikini tests, teams of men boarded heavily contaminated ships and pulled out the animals which had been placed on board to determine radioactivity effects. These men stayed several minutes at a time and nothing happened to them.

So, the third rule: Stay in your shelter until it is time to leave.

Those are the three simple, basic rules. Now, let’s get more specific.

IF YOU ARE IN YOUR HOME . . . first you must try to make it flameproof. An atom bomb can set fires more than two miles from the point of detonation since it pours one-third of its tremendous energy into thermal or heat radiation. Take the following precautions: put dry leaves, trash, oily rags, any readily inflammable material into metal cans and cover them tightly. Shut off all utilities—the oil burner, the pilot light on the gas stove and water heater. Batten down the draft doors of your coal-burning furnace and wood stove. Then prepare for a fire just in case—make sure a stirrup pump and a hand fire extinguisher are available and place pails of sand and water at strategic locations.

Second, you must make your home as airtight as possible. Close all doors, windows, chimney vents, lock shutters and draw curtains, drape sheets or other fight-colored material around them. Radioactive wastes can enter your house through the tiniest fissures.

Then go to your shelter which will be either the basement or a small area dug into the ground from the side of the basement. Even before the alert, you should have prepared your shelter with emergency equipment, including a flashlight in the event that the electricity is knocked out, a supply of canned food and an axe to chop your way out if the entrance is sealed off by the blast.

In addition, you should have a first aid kit, containing a burn salve, soft cloth, gauze, absorbent cotton and an antiseptic. If you suffer any cut, no matter how trifling, wash and bandage it immediately to prevent radioactive particles from entering and damaging the bloodstream.

You should have drawn several gallons of clean water and stored them in the shelter for use directly after the raid because there is a possibility that the water in your pipes may become dangerously radioactive. Don’t boil it because boiling concentrates rather than removes radioactive particles.

As soon as the water supply has been okayed after the raid, take a shower. But a good one! Radioactivity can cling to you, but only a bit more strongly than ordinary dust or dirt. Scrub yourself thoroughly with soap and water, paying particular attention to your fingernails and hair. Then don a complete change of clothing, burying your old ones.

IF YOU ARE IN YOUR OFFICE . . . leave the upper stories as quickly as possible. Not only are you in danger of having the floor fall out from under you, but there are few barriers in the form of steel, concrete and wood to shield you from the radiation. Head for the basement as soon as the siren sounds and remain as close as possible to heavy, supporting columns to avoid the danger of collapsing beams. Stay away from all entrances and all windows. If there are heavy steel doors and shutters, close them.

get out of the open. Remember that flash and flame burns killed 50 per cent of the 106,000 persons who died in the atomic attack on Hiroshima and Nagasaki and accounted for 75 per cent of all casualties. The bomb’s heat rays travel in a straight line—so all you have to do is get inside.

Head for the nearest official shelter. If there aren’t any, a subway—the deeper the better—will do as well. Or enter the nearest, strongest-looking building and head for the basement. If you are crowded out of there, get against some partition in some interior, as low to the base of the building as possible.

IF YOU ARE TRAPPED ON THE TOP FLOOR OF A BUILDING . . . and descent to the basement is prevented by jammed elevators and stairs, don’t join the mob battling to get down. Proceed to a point as close to the center of the building as possible and lie against a wall or strong supporting column, out of line of the windows. Or crawl under a table, sofa or desk which would provide protection against flying glass.

do not try to flee the scene. You will speedily find yourself caught in a maelstrom of traffic. Park your car at once, but do not obscure the traffic lanes. Leave your keys in the auto in case it has to be moved to make way for emergency equipment. Close the windows and head for shelter.

IF YOUR ARE IN A TROLLEY, BUS OR SUBWAY …

follow the evacuation instructions of the engineer or driver. If you are on a subway platform, remain where you are.

all these places should have shelters in their basements and specific people whose job it will be to lead you to them. If they do not or if there is not time to reach the shelters, lie down as close to the outer walls as possible.

IF YOU ARE ON THE BEACH . . . the chances are that you won’t be too far from cover of some sort. But get your clothes on first. Clothing will help reduce the danger of flash burns. If at all possible, wear long trousers or slacks, a loose-fitting blouse and a hat. Light-colored clothes are much more effective shields against burns than dark ones. But in any event, cover as much of your body as you can, then take cover in a shelter. Buildings around a beach are usually of comparatively flimsy construction, so judge whether you can get far enough inland to reach a strong building in the time you have. If you can’t, then find shelter where you are. Get into a rock depression, behind a massive tree or, if nothing else is available, dig yourself a foxhole and lie in it face down.

IF YOU ARE FISHING ON A LAKE . . . gauge your distance from shore. Can you make it? If you can, head for the nearest heavily-wooded inlet or largest rock and snuggle against it. Select a rock on the side facing away from the city, because that’s where the enemy is aiming his bomb.

If you are too far out to make shore, dive into the water and stay there until the explosion comes, keeping averted the side of your head facing the city.

proceed to the closest atom-bomb shelter. If there is none, even a furrow in a plowed field will give you some protection if you lie in it.

If the atom bomb is ever dropped on your city, there is no doubt that it will cause devastation on a scale you have never seen before. But that is no reason for you to give up hope for your own life.

You have read about the things which you can do to safeguard yourself and your family. They will increase your chances of survival a hundredfold. When and if the time comes, remember to do them and the 30 minutes before the bomb falls will certainly prove to be the most important 30 minutes of your life! •