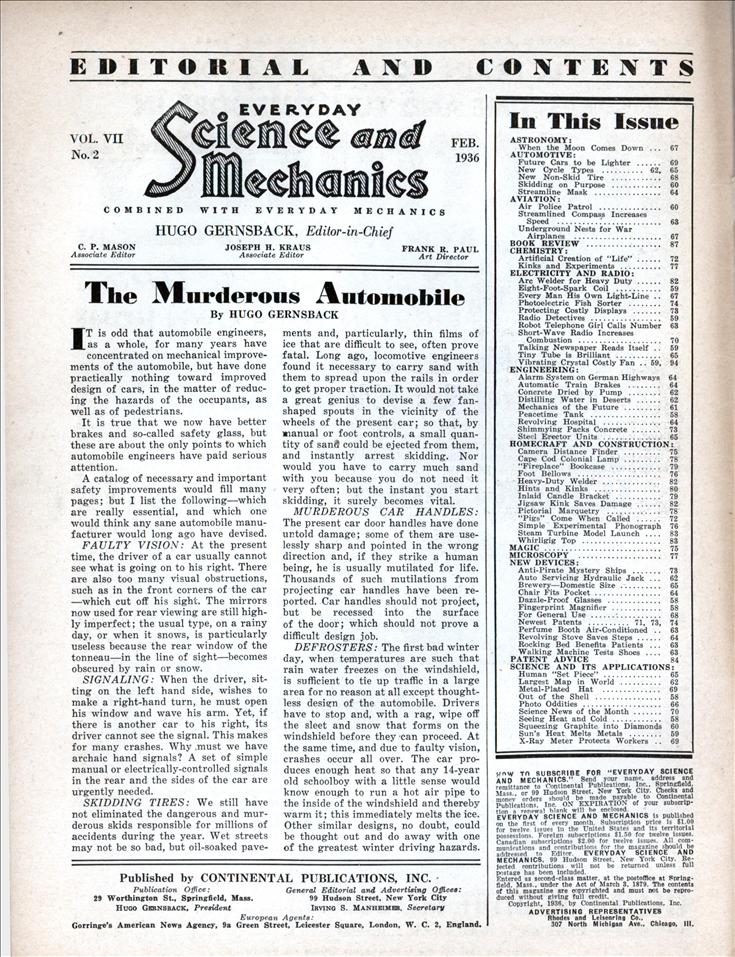 IT is odd that automobile engineers, as a whole, for many years have concentrated on mechanical improvements of the automobile, but have done practically nothing toward improved design of cars, in the matter of reducing the hazards of the occupants, as well as of pedestrians.

It is true that we now have better brakes and so-called safety glass, but these are about the only points to which automobile engineers have paid serious attention.

A catalog of necessary and important safety improvements would fill many pages; but I list the following—which are really essential, and which one would think any sane automobile manufacturer would long ago have devised.

FAULTY VISION: At the present time, the driver of a car usually cannot see what is going on to his right. There are also too many visual obstructions, such as in the front corners of the car —which cut off his sight. The mirrors now used for rear viewing are still highly imperfect; the usual type, on a rainy day, or when it snows, is particularly useless because the rear window of the tonneau—in the line of sight—becomes obscured by rain or snow.

SIGNALING: When the driver, sitting on the left hand side, wishes to make a right-hand turn, he must open his window and wave his arm. Yet, if there is another car to his right, its driver cannot see the signal. This makes for many crashes. Why .must we have archaic hand signals? A set of simple manual or electrically-controlled signals in the rear and the sides of the car are urgently needed.

SKIDDING TIRES: We still have not eliminated the dangerous and murderous skids responsible for millions of accidents during the year. Wet streets may not be so bad, but oil-soaked pavements and, particularly, thin films of ice that are difficult to see, often prove fatal. Long ago, locomotive engineers found it necessary to carry sand with them to spread upon the rails in order to get proper traction. It would not take a great genius to devise a few fan-shaped spouts in the vicinity of the wheels of the present car; so that, by manual or foot controls, a small quantity of san<5 could be ejected from them, and instantly arrest skidding. Nor would you have to carry much sand with you because you do not need it very often; but the instant you start skidding, it surely becomes vital.

MURDEROUS CAR HANDLES: The present car door handles have done untold damage; some of them are uselessly sharp and pointed in the wrong direction and, if they strike a human being, he is usually mutilated for life. Thousands of such mutilations from projecting car handles have been reported. Car handles should not project, but be recessed into the surface of the door; which should not prove a difficult design job.

DEFROSTERS: The first bad winter day, when temperatures are such that rain water freezes on the windshield, is sufficient to tie up traffic in a large area for no reason at all except thoughtless design of the automobile. Drivers have to stop and, with a rag, wipe off the sleet and snow that forms on the windshield before they can proceed. At the same time, and due to faulty vision, crashes occur all over. The car produces enough heat so that any 14-year old schoolboy with a little sense would know enough to run a hot air pipe to the inside of the windshield and thereby warm it; this immediately melts the ice. Other similar designs, no doubt, could be thought out and do away with one of the greatest winter driving hazards.