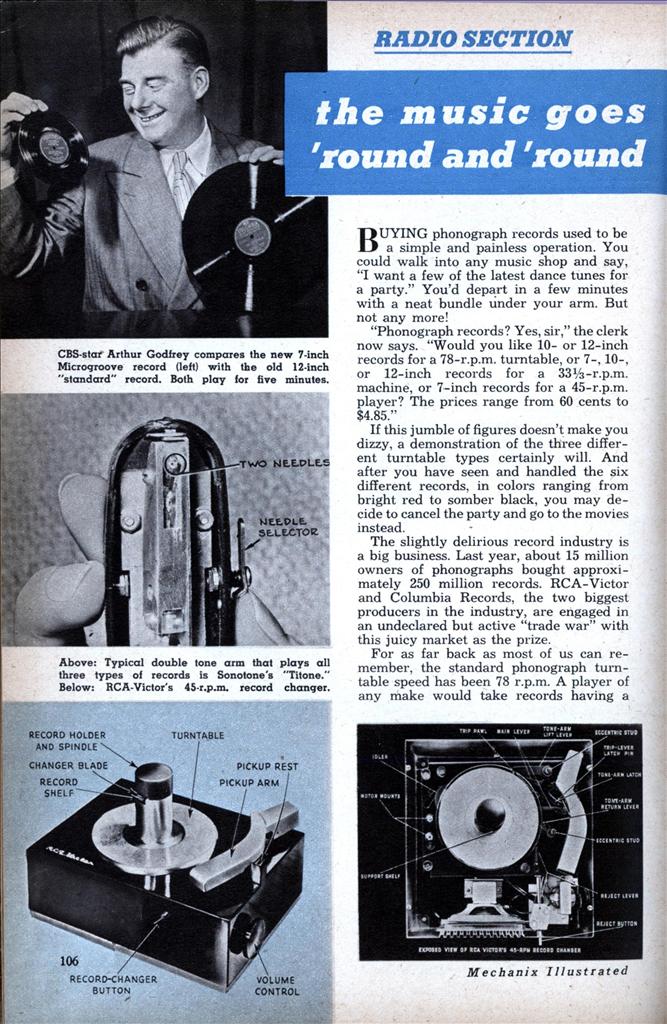 the music goes ’round and ’round

People who like phonograph music are getting dizzy trying to keep up with three different systems of playing three sizes of disks.

BUYING phonograph records used to be a simple and painless operation. You could walk into any music shop and say, “I want a few of the latest dance tunes for a party.” You’d depart in a few minutes with a neat bundle under your arm. But not any more!

If this jumble of figures doesn’t make you dizzy, a demonstration of the three different turntable types certainly will. And after you have seen and handled the six different records, in colors ranging from bright red to somber black, you may decide to cancel the party and go to the movies instead.

The slightly delirious record industry is a big business. Last year, about 15 million owners of phonographs bought approximately 250 million records. RCA-Victor and Columbia Records, the two biggest producers in the industry, are engaged in an undeclared but active “trade war” with this juicy market as the prize.

For as far back as most of us can remember, the standard phonograph turntable speed has been 78 r.p.m. A player of any make would take records having a diameter of 10 or 12 inches. These sizes have maximum playing times of 2-1/2 and 5 minutes per side, which are adequate for popular selections and dance music but, of course, much too limited for long classical works. To eliminate the bother of changing disks manually when a symphony was being played, manufacturers brought out automatic record changers. Some of these machines must have been designed by disciples of Rube Goldberg. They are weird contraptions with flailing arms and complex gear trains, they have a tendency to wreck the records, and they’re out of order about half the time.

Last year, Columbia Records, Inc., a wholly owned subsidiary of the Columbia Broadcasting System (keep that little fact in mind), made a big splash with the first really important improvement in phonograph records in almost half a century: a new 12-inch record that turns at only 33-1/3 r.p.m. and plays for a maximum of about 22-1/2 minutes. Coincidentally, it brought out a 10-incher that runs for 13% minutes and a 7-inch baby that last 5 minutes. The smallest one is thus equivalent to the old 12-inch, 78-r.p.m. disk.

“What about those 45-minute records I read so much about?” you ask. The 12-inch, 33 -1/3 -r.p.m. disk is the 45-minute record, played on both sides. That expression “45-minute record” was used a bit loosely in the initial advertising and publicity. You had to read down into the fine print to learn that the figure represented two sides, not one. At that, more than a third of an hour of uninterrupted music is a lot of music, and Columbia’s LP (for long-playing) Microgroove records were a quick success.

The word Microgroove explains the secret of the new disks. As you probably know in a general way, a phonograph transcription consists of a wiggly spiral cut into the face of a flat plastic disk. A sensitive needle, attached to a tone arm, follows the grooves and translates the undulations into impulses, which are increased in volume and reproduced by the amplifier section of a radio or by a separate phono amplifier. In 78-r.p.m. records, the grooves run between 85 and 100 to the inch, the needle point is about three thousandths of an inch thick, and the pressure of the pick-up against the record is between one and three ounces. In the LP records, the grooves hit between 225 and 300 to the inch, the needle tip is one thousandth, and the pick-up pressure is about a fifth of an ounce.

The tone quality of the LP disks is generally regarded as superior to that of the older records. A notable feature is absence of scratch noise, a result of the very light needle tracking.

Right off the bat. you can see that the new records won’t work on an old machine. Columbia was all prepared for this. When the records were announced, Philco had a new player and a tone arm to go with them. Fortunately, no revisions had to be made in the amplifier circuits. Any owner of a high-grade phono-radio combination could tie in a 33-1/3 r.p.m. turntable in a matter of minutes.

And it was a simple matter for manufacturers to rush out two-speed equipment fitted with dual tone arms or single arms containing separate pick-ups that could be switched in and out at will. This was a wise move, because there are millions . . . probably billions . . . of perfectly good 78-r.p.m. disks carefully preserved in albums, and their owners have no intention of throwing them away just for the sake of new records that play longer. Existing automatic changers could readily be adapted in manufacture to the two-speed turntables because the physical dimensions of the 12-inch LP records are identical with those of the 12-inch 78-r.p.m. disks. Only four LP records, changed and flopped automatically, can thus provide three solid hours of music—providing the changer doesn’t decide to chuck them across the room into the fireplace.

Just when the two-speed turntable and the LP records began gaining momentum, RCA-Victor threw a small atomic bomb into the happy picture in the form of a new 7-inch record that turns at 45 r.p.m. and has a 1-1/2 inch center hole instead of the 1/4-inch opening found in all other records. Its grooves run between 250 and 275 per inch and the needle size and pressure are the same as for the LP disks. The playing time per side is 5-1/3 minutes.

People in and out of the radio industry rushed to criticize RCA-Victor for bringing out another “nonstandard” record. A point not generally appreciated, but deserving a lot of attention, is that with the record itself the company introduced a new automatic player of highly ingenious but simple construction. The entire changing mechanism is enclosed in the stubby center post or spindle, with no outside arms, levers, carrying pans, or anything else. The spindle takes a stack of ten records, giving a total of more than 50 minutes of playing time. The records drop into position quickly and quietly. Anyone accustomed to the erratic and sometimes spectacular behavior of ordinary automatic changers will be intrigued by the effortless functioning of this new device. Its simplicity makes it especially valuable for children’s use, for dance parties, etc.

The 45-r.p.m. records themselves have a construction feature not found in any others. The label area, immediately around the spindle hole, is thicker than the playing surfaces; so the latter cannot rub against either each other or the top of the turntable. This undoubtedly makes the disks last longer and give better music during their life. Most ordinary records have to be discarded long before their grooves actually wear out because they get so scratched up.

The advent of the RCA records caused the New York newspapers a few months ago to give front-page prominence to reports of a “record war” between that company and Columbia. This surprised no one because the Columbia Broadcasting System, which owns Columbia Records, has been feuding with the National Broadcasting Company, which is owned by RCA. The head of Columbia records issued a long and somewhat angry statement denouncing RCA; RCA officials said nothing and went right ahead with a million-dollar campaign to put their new system over.

Turntable manufacturers lost no time in. revamping their products to accommodate the 45-r.p.m. disks. By the time this issue of Mechanix Illustrated appears, there will be on the market dozens of three-speed players, with double tone arms, that will handle any records now sold. If you want to play some of your old favorites, you shift the speed lever to 78, push in a 1/4-inch spindle, select the three-mil pick-up, and load ‘er up. If you want to go high brow and listen to Brahms or Shostakovich for a couple of hours, shift to 33-1/3, leave the 1/4-inch spindle in position, select the one-mil pick-up, and pretend you’re in Carnegie Hall. If there’s a special new number on a 45-r.p.m. disk, shift to 45 on the turntable, plug in the special 1-1/2-inch adapter spindle, and let it roll.

If you’re perfectly happy with your prewar phono-radio combination and don’t feel inclined to invest money in a new two- or three-speed player, you won’t be missing a thing. Both Columbia and RCA have announced that 78-r.p.m. duplicates will be made of all new recordings.

Columbia and RCA-Victor advance excellent reasons for their choices of record speeds. Mostly, they’re very technical and are tied up with the distortion effects that occur at different speeds in relation to the diameters of the grooves. As far as quality of reproduction is concerned, I doubt if one listener in ten thousand could detect any appreciable difference between the two makes. When you get down to it, the RCA 7-inch 45-r.p.m. record, playing five minutes, is virtually identical with the Columbia 7-inch 33-1/3-r.p.m. “Long-Playing” disk, which also runs five minutes; RCA just doesn’t use the term long playing, because a five-minute record certainly is not a long-playing one. The 13-1/2- and 22-1/2-min-ute Columbia records are something else. For classical music, they undeniably are wonderful. Personally, I am of the opinion that RCA-Victor isn’t much concerned about the high-brow trade and figures that it can do plenty of business with the many more people who go for the popular stuff. Pay your money and take your choice!