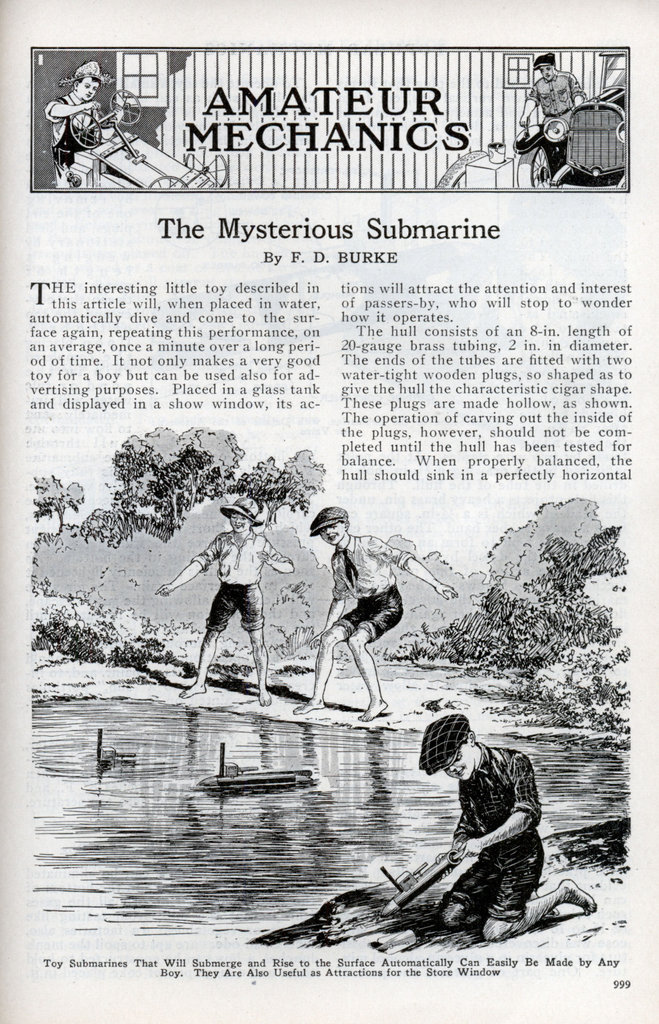 THE interesting little toy described in this article will, when placed in water, automatically dive and come to the surface again, repeating this performance, on an average, once a minute over a long period of time. It not only makes a very good toy for a boy but can be used also for advertising purposes. Placed in a glass tank and displayed in a show window, its actions will attract the attention and interest of passers-by, who will stop to wonder how it operates.

The hull consists of an 8-in. length of 20-gauge brass tubing, 2 in. in diameter. The ends of the tubes are fitted with two water-tight wooden plugs, so shaped as to give the hull the characteristic cigar shape. These plugs are made hollow, as shown. The operation of carving out the inside of the plugs, however, should not be completed until the hull has been tested for balance. When properly balanced, the hull should sink in a perfectly horizontal position. Attached to the plug that forms the stern are two vertical fins, cut from very light tin and attached by means of No. 20 nails, 1/2 in. long.

The conning tower is cut from a solid block of wood. It is fastened to the hull by means of small brass angles, nailed to the conning tower and soldered to the hull. The periscope is a 3-in. length of 1/4 – in. dowel stock, and attached to the tower by three No. 20 nails, 1/2 in. long. A 2-in. length of 1/4-in. dowel is hinged to the after side of the conning tower by two wire staples. At the point indicated in the drawing a 1/16-in. hole is drilled in the tube of the hull. Through this hole projects a heavy brass pin, under the head of which is a 1/4-in. square cut from a heavy rubber band. The other end of the pin is bent to form an eye, and is attached to the dowel by another small staple. The action of this part of the mechanism is as follows: When the submarine is submerged, the dowel acts as a float and pulls the rubber against the hole in the tube, closing it; when the submarine is on the surface the dowel acts as a weight and drops, thus opening the hole to the air. Another 1/16-in. hole is drilled in the bottom of the hull to allow water to flow in and out.

To operate the toy, a small 1-oz. can of a flat shape, such as can be obtained from any drug store, is filled with carbide, a pinhole having previously been drilled or punched in the cover. The loaded can is placed in the hull in the position shown by removing one of the end plugs, and held stationary by wedging a length of match stick between the cover and the top of the hull. Upon placing the completed ship in the pond or tub, water will immediately start to flow into the hull through the bottom opening, and the submarine will slowly sink. When it is fully submerged the automatic air valve will’ close. The water will then slowly seep into the carbide container and form acetylene gas, which, in a short time, creates sufficient pressure to force the water out again through the opening in the bottom. As soon as the hull is sufficiently lightened it rises to the surface again. The air valve will then open, allowing the gas to escape, and the operation will be repeated until the carbide is exhausted.

After being thoroughly tested for balance and operation, the whole ship should be given several coats of paint, and, to increase its likeness to a “sub,” portholes should be painted on the conning tower.