Popular Mechanics
Issue: May, 1936
Posted in: Science
2 Comments on The MYSTERY of HOTTER and COLDER (May, 1936) 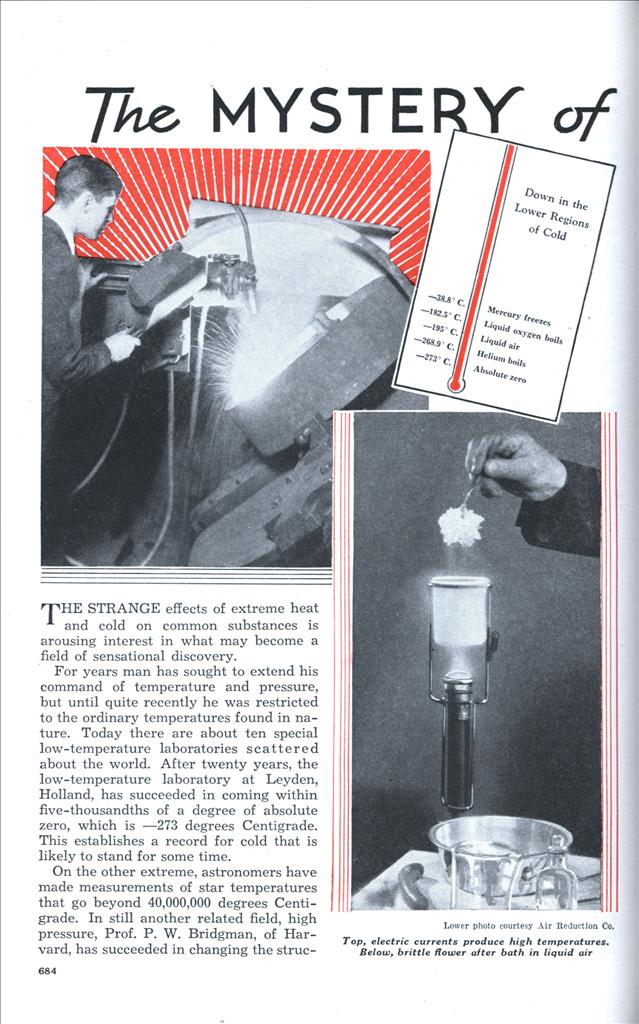 The MYSTERY of HOTTER and COLDER

THE STRANGE effects of extreme heat and cold on common substances is arousing interest in what may become a field of sensational discovery.

For years man has sought to extend his command of temperature and pressure, but until quite recently he was restricted to the ordinary temperatures found in nature. Today there are about ten special low-temperature laboratories scattered about the world. After twenty years, the low-temperature laboratory at Leyden, Holland, has succeeded in coming within five-thousandths of a degree of absolute zero, which is —273 degrees Centigrade. This establishes a record for cold that is likely to stand for some time.

On the other extreme, astronomers have made measurements of star temperatures that go beyond 40,000,000 degrees Centigrade. In still another related field, high pressure, Prof. P. W. Bridgman, of Harvard, has succeeded in changing the structure of many common substances by subjecting them to pressures equal to those several hundred miles below the surface of the earth.

It is likely that men will be able to go beyond that figure, but it is extremely unlikely they will be able to exceed the cold of absolute zero. Greater cold is not known anywhere, not even in the upper reaches of space.

Why search for very high temperatures? We have reason to believe that if we could generate and control temperatures of 100,000 degrees or more, it would be possible to create new substances and find new properties for old substances. In the realm of extreme cold, the present interest centers around some recent experiments tending to show it is possible to freeze animals into a state of inactivity, as if they were dead. After remaining inactive for some indefinite period, the animal is revived by slow thawing and the application of stimulants.

Although there is reason to doubt that men can remain in a state of “suspended animation” by being frozen into a state of inactivity, there is no doubt that microbes can do so. Immersed in liquid helium at a temperature of —450 degrees Fahrenheit and kept there for weeks at a time, germs have come out alive and kicking, none the worse for their experience. This shatters many of our illusions about the frailty of microbes. There is much to say for their stamina. Prof. Bridgman’s work with high pressures has brought him into the realm of “hot – and cold ice.” Examining many solid substances, he discovered they pass through significant crystalline changes when subjected to high pressure. So far, he has distinguished some queer varieties of ice. “Hot ice Number one” may be heated to a temperature too hot to bear with the hand if enough pressure is applied to prevent it from melting.

For the present, the method of raising a temperature of 5,500 degrees Centigrade in a hotspot sun furnace might bear improvement by some more efficient method of focusing the sun’s rays. However, the general belief is that if we are really to pass into the realm of high temperatures, we must first learn how to handle the slippery and mysterious atom.

It may be that the intense sustained heat and light of the stars is due only to high temperatures and pressures. The youngest stars radiate the most energy. One youngster, called Plaskett’s star, is held to have a central temperature of 500,000,000 degrees Centigrade. According to Sir James Jeans, “all processes which are affected by temperatures of less than 7,500,000,000,000 degrees leave the total number of electrons and protons in a star unimpaired.” This is a little more heat than we are prepared to handle on our planet, and indeed, it is more than is ordinarily discussed by astronomers.

For the extremes of temperature, the ordinary mercury thermometer will not work. To measure the cold around absolute zero, it is necessary to employ a magnetic thermometer. This method increases in sensitivity as the temperature is lowered. Above 500 degrees Centigrade, the mercury thermometer must be discarded. It is necessary to use gas thermometers up to the melting point of platinum, 1,755 degrees Centigrade. For reading above the melting point of platinum, a form of optical thermometer is used. This works on the assumption that flame colors vary according to the temperature. But near the maximum temperatures obtainable by man, it is quite difficult to get accurate readings.