Science Illustrated
Issue: May, 1949
Posted in: General
6 Comments on The Mystery of the Shrinking Oranges (May, 1949)

The Mystery of the Shrinking Oranges (May, 1949) 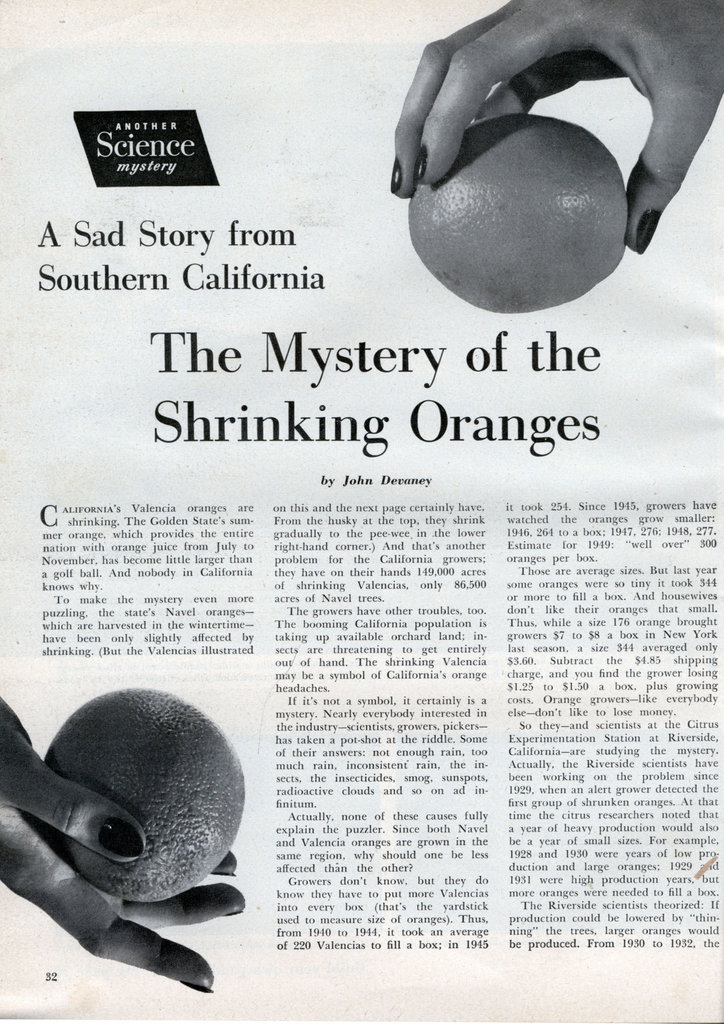 The Mystery of the Shrinking Oranges

A Sad Story from Southern California

California’s Valencia oranges are shrinking. The Golden State’s summer orange, which provides the entire nation with orange juice from July to November, has become little larger than a golf ball. And nobody in California knows why.

To make the mystery even more puzzling, the state’s Navel oranges— which are harvested in the wintertime-have been only slightly affected by shrinking. (But the Valencias illustrated on this and the next page certainly have. From the husky at the top, they shrink gradually to the pee-wee in the lower right-hand corner.) And that’s another problem for the California growers; they have on their hands 149,000 acres of shrinking Valencias, only 86,500 acres of Navel trees.

The growers have other troubles, too. The booming California population is taking up available orchard land; insects are threatening to get entirely out of hand. The shrinking Valencia may be a symbol of California’s orange headaches.

If it’s not a symbol, it certainly is a mystery. Nearly everybody interested in the industry—scientists, growers, pickers-has taken a pot-shot at the riddle. Some of their answers: not enough rain, too much rain, inconsistent rain, the insects, the insecticides, smog, sunspots, radioactive clouds and so on ad infinitum.

Actually, none of these causes fully explain the puzzler. Since both Navel and Valencia oranges are grown in the same region, why should one be less affected than the other?

Those are average sizes. But last year some oranges were so tiny it took 344 or more to fill a box. And housewives don’t like their oranges that small. Thus, while a size 176 orange brought growers $7 to $8 a box in New York last season, a size 344 averaged only $3.60. Subtract the $4.85 shipping charge, and you find the grower losing $1.25 to $1.50 a box, plus growing costs. Orange growers—like everybody else—don’t like to lose money.

So they—and scientists at the Citrus Experimentation Station at Riverside, California—are studying the mystery. Actually, the Riverside scientists have been working on the problem since 1929, when an alert grower detected the first group of shrunken oranges. At that time the citrus researchers noted that a year of heavy production would also be a year of small sizes. For example, 1928 and 1930 were years of low production and large oranges; 1929 and 1931 were high production years, but more oranges were needed to fill a box.

The Riverside scientists theorized: If production could be lowered by “thinning” the trees, larger oranges would be produced. From 1930 to 1932, the scientists thinned trees in six orchards. Sure enough, the resulting oranges were larger. But the next year’s crop on the thinned trees was just as heavy (and thus as small) as formerly. Concluded Dr. Leon D. Batchelor, director of Riverside: “It seemed a case of the more you thin, the more you have to thin.”

After this disappointment the scientists left their test orchards, went back into the fields again. This time they noticed that trees with a large amount of leaves bore large fruit; trees with sparse foliage produced small oranges. And since insects are usually responsible for ruined foliage, the scientists trained their sights on the insects.

The number one pest of the citrus belt is a bug named red scale; number two is red mite (alias red spider). Both pests are adept at stripping a tree bare of leaves. They also are adept at staying alive.

But are the pests responsible for midget Valencias? It’s doubtful. Navel oranges are also raided by insects, yet have not shrunk as much as Valencias.

But if insects aren’t the cause, then what is? You can get plenty of answers to that in California, but few good ones. A Science Illustrated reporter canvassed the industry, picked up these interesting theories: “The smog we have here (Riverside) is the main reason. It’s caused by the dust from a cement plant at Colton, and from the smoke of Santa Fe railroad shops at San Bernardino. It poisons the oranges.”

Scientists pooh-pooh this theory, since, the smog occurs infrequently (only when the wind blows in a certain direction).

Another: “We’ve only had serious small-orange trouble during the past five years—and four of those years were drought years. You need water to grow oranges.”

You certainly do, but Riverside scientists point out that orange growers depend principally upon irrigation for water—not the rain.

Other chauvinistic Californians blame the “bad” Colorado River water, which feeds many California groves via aqueduct. But they’re being unfair; most major groves use deep wells as sources for their irrigation canals.

Some growers are firmly convinced that sunspots are the cause of it all, while others, staying closer to home, point an accusing finger at the New Mexico atomic bomb explosion.

Another interesting theory—which gives orange growers the cold shivers-is that California groves are just played out. They shiver because good virgin citrus land is scarce; and expanding suburbs have made it even scarcer. Some people in the industry claim Southern California will have no more space in 20 years to grow oranges.

That may be over-pessimistic, but there is some evidence that the present groves have become senile. Riverside scientists have observed devitalized and decaying root systems under midget-orange trees. But, asks Dr. Batchelor, are they a cause or an effect? Injury to the foliage of the trees would influence the amount of nutrient materials flowing back to the roots—thus decaying the root systems.

That crimp in the senility theory brings us back to poor foliage—and insects. Another theory blames them again—but this time only indirectly. The Riverside scientists have observed that oil sprays (the most popular insecticide in California) “are almost uniformly adverse to the health of the trees and vary from striking losses of foliage and fruit to an apparent increase of dead twigs in the trees.”

Since poor foliage is a clue to midget Valencias, the scientists think that a new, safer and more effective insecticide may mean larger oranges.

Up to now, their soundest bet has been an organic acid labeled 2,4-D, best known as a weed killer. Used in very minute solutions, 2,4-D has lessened the destructiveness of oil sprays. One enterprising grower, J. A. Porter, of Olive Hillside Groves, went further; he sprayed his Valencia trees with a water solution of 2,4-D, and increased the sizes of his Valencias appreciably.

However, 2,4-D is still an uncertain remedy. If used in too great an amount, the oranges will expand but have rough, thick peels; so it doesn’t answer the riddle, either. The scientists want to know why the Valencias are getting smaller, not how to make them larger artificially.

If the housewives’ suspicions are correct, you won’t be drinking as much orange juice this summer; California Valencias are the only orange on the market from July to November.

Florida and Texas pluck their oranges once a year—from October to May. By July that batch is cleaned up (except for small amounts in cold storage), and California Valencias take over for the summer. In November, Florida and Texas start competing with California Navels.

But the summer monopoly may end, some worried growers fear. If Riverside scientists don’t clear up the mystery of shrinking Valencias, the growers may have to yield Southern California to Hollywood’s movie-makers, and try their luck in a much less mystifying environment.