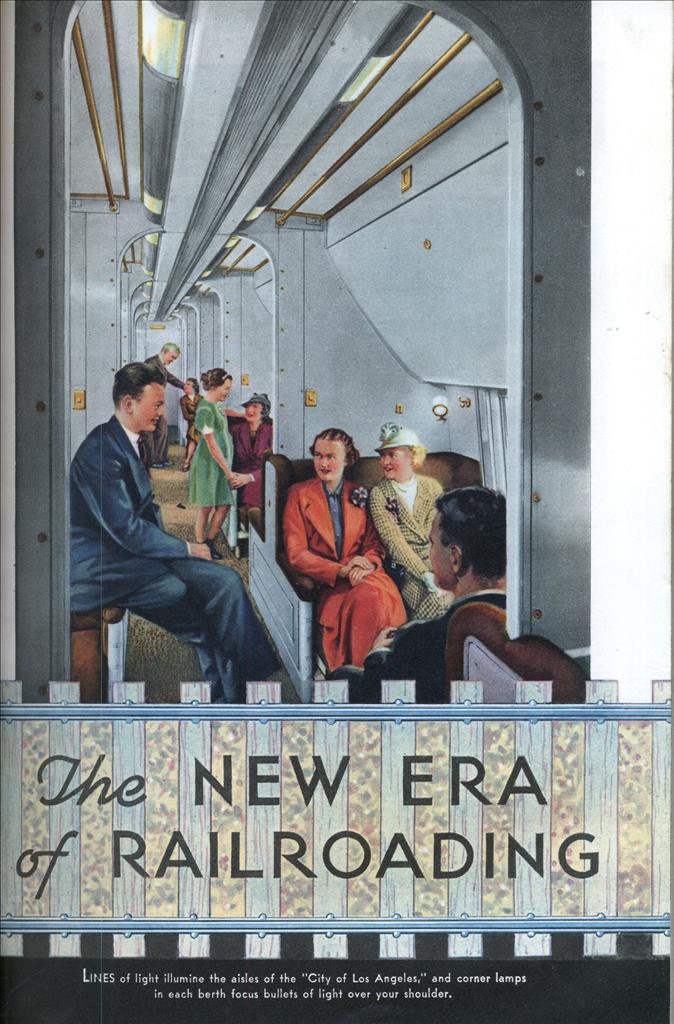 The NEW ERA of RAILROADING

IT took ninety years to start the revolution that set the streamline train on its time-shattering career. You knew that revolution had come when you read that the fiery old iron horse had been stabled and in its place, trailing a string of coaches straight and smooth as an arrow’s shaft, was no grimy black engine but a strange new power car of “cobalt and sarasota blue, golden olive and pimpernel scarlet.” Like an arrow the streamliner shot across the country, caught the public imagination, beckoned a new generation that thought the railways outmoded and slow to come for a thrilling hundred-mile-an-hour ride in this aluminum bullet.

A new era in railroading was beginning, yet its seeds were buried ninety years ago. For the streamline train was first prophetically suggested in a British patent granted in 1846 to Sir Henry Bessemer, inventor of the Bessemer steel process. He proposed a “wedge form” for the piston carriage of “atmospheric railways,” to ” diminish atmospheric resistance and allow the carriage to move at higher velocities with less power. The wedge form may be used both in the fore and hind parts of carriages or of trains, in addition to the closing of the intermediate spaces.” In 1865, as the American Civil War closed, U. S. patent No. 49,227 was issued to S. R. Calthrop for a train designed to diminish wind resistance, but the train was never developed. At the turn of the century the “Windsplitter,” America’s first streamline train, was given trial on the Baltimore & Ohio tracks in Maryland. It was designed by F. U. Adams of Chicago, a newspaper man. It never was placed in scheduled service, and the streamline idea slumbered on.

The epoch of the streamliner was born, at last, of necessity. In 1920 the railroads carried a peak-year load of 1,235,- 000,000 passengers. In 1933 only 433,-000,000 passengers chose the rails for their thoroughfare. Passenger-miles dwindled from forty-seven billion in 1920 to a little more than sixteen billion in 1933. What drastic, dramatic gesture could lure back the lost passengers to the railways?

The streamliner was the answer. Dramatic “packaging” for the traveler. Mighty power plants wrapped in color â€” “sarasota blue and pimpernel scarlet,” for oneâ€”that would draw thousands every day to watch them roar by, and would pile up a waiting list of passengers.

The railroads borrowed style from giant air transports and from streamline automobiles. But speed called for more than mere styling, and the railroads went to the automotive manufacturers for an engine that would haul million-pound trainsâ€”built at a cost of -a dollar a poundâ€”across the continent day after day at eighty and ninety mile speeds without breakdown. Speed was nothing new to the old iron horse, for a record of 127.1 miles per hour marked up by the Pennsylvania’s Broadway Limited in 1905 has yet to be challenged by today’s fast trains. Even today the Chicago and North Western’s conventional steam “400” matches the better than mile-a-minute pace of the streamline steam “Hiawatha” and the Diesel-electric “Zephyr” between Chicago and St. Paul. But sustained speed, a thousand miles nightly from Chicago to Denver, two-thousand-mile sprints from Lake Michigan to the Pacific, called for an engine with long-distance stamina, and the Diesel was given the assignment.

Climb into the massive yellow power car of the “City of San Francisco,” one of the newest and most powerful of the growing fleet, and watch the engineer start his eleven-car streamliner on its journey of two nights and a day to the bay city from Chicago. Half-way across Nebraska this speedster will overtake the steam train that left Chicago eight hours in advance.

The Diesel-electric engineer is half automobilist, half electric motorman. His “fireman”â€”an obsolete termâ€”climbs down into the grey power room that resembles the engine room of a great ship, starts the Diesels as you would start an automobile engine, and rejoins the engineer in the cab. Three auxiliary motors have already been running, furnishing power for lights, air-conditioner, brake lines. Given the “highball,” the engineer releases his brakes, sets the motor in “series” and advances the controller to “Speed 2.” The mighty locomotive starts forward almost imperceptiblyâ€” a jolt is all but impossible with articulated, shockproof couplingâ€”the controller is advanced again and the purr of the Diesels becomes a roar as the electric drive draws more and more power. When the train reaches a speed of thirty miles an hour the controller is thrown back, as if to shift gears; the motor is switched from “series” to “parallel” and again the controller moves forward. There are eight speeds oh the controller. At sixty miles an hour the engineer switches beyond ” parallel” into the high cruising range, and the streamliner hits its stride.

Like an automobile, the Diesel is watercooled and the crew must keep its temperature around 160 degrees. Dials in the cab show the engine temperature, train speed, and air-brake pressure. There are warning lights to indicate overheated motor and low lubricating oil. Instead of semaphore signals, the automatic train control flashes a light in front of the engineer if the track ahead is obstructed, and if he fails to reduce speed in acknowledgment of the warning, the train is automatically brought to a stop. Temperature of the motors can be controlled by shutters at the front of the locomotive, regulated from the cab.

At the end of the 2,260-mile run they park the big streamliner over a greasing pit and give it about the same care you give your automobile after a week-end trip. They vacuum and scrub the cars in-side and out, man the grease guns and fill the oil and water tanks. The Diesel itself they leave pretty much alone. It’s good for a few hundred thousand miles with scarcely a look. And that is why the Diesel-electric is stealing the show from the steam locomotive, which can travel just as fast. It takes no less than four steam enginesâ€”a change every 500 milesâ€”to pull a passenger train from Chicago to the coast, with many another stop for coal, or fuel oil, or water. Half-hour stops for servicing are common. The Diesel spurns relief, stops no longer than ten minutes to refuel, keeps ordinary stops within a minute’s span. The “City of Denver” pauses just forty-five seconds at Boone, Ia., for change of crew. It is this saving in operating delays, and its endurance at high speed, that enables the Diesel to clip twenty-two hours from the transcontinental time of the steam trains.

Too, the Diesel economizes in fuel and water, as well as in maintenance cost. It burns a relatively inexpensive fuel oil. It needs no boiler water, thus eliminating a cost item for such railroads as the Santa Fe, which must haul water in tank cars as far as 100 miles in dry regions of the southwest.

But the Diesel-electric locomotive still costs approximately two and one-half times as much as a steam engine, and its life span is unknown. No steam locomotive has been put to the test these Diesels are meeting. A decade may prove the old iron horse supreme, after all. Meanwhile the glittering streamliner of the new era has brought speed and glamourâ€”and passengersâ€”back to the railroads.