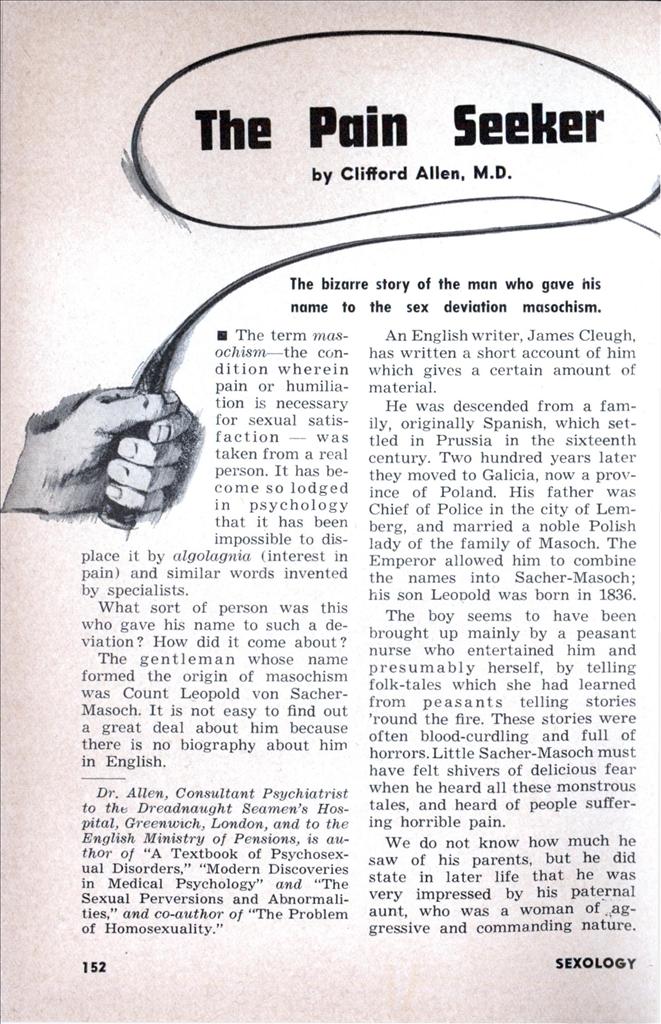 The bizarre story of the man who gave his name to the sex deviation masochism.

The term masochism—the condition wherein pain or humiliation is necessary for sexual satisfaction — was taken from a real person. It has become so lodged in psychology that it has been impossible to displace it by algolagnia (interest in pain) and similar words invented by specialists.

What sort of person was this who gave his name to such a deviation? How did it come about?

The gentleman whose name formed the origin of masochism was Count Leopold von Sacher-Masoch. It is not easy to find out a great deal about him because there is no biography about him in English.

An English writer, James Cleugh, has written a short account of him which gives a certain amount of material.

He was descended from a family, originally Spanish, which settled in Prussia in the sixteenth century. Two hundred years later they moved to Galicia, now a province of Poland. His father was Chief of Police in the city of Lemberg, and married a noble Polish lady of the family of Masoch. The Emperor allowed him to combine the names into Sacher-Masoch; his son Leopold was born in 1836.

The boy seems to have been brought up mainly by a peasant nurse who entertained him and presumably herself, by telling folk-tales which she had learned from peasants telling stories ’round the fire. These stories were often blood-curdling and full of horrors. Little Sacher-Masoch must have felt shivers of delicious fear when he heard all these monstrous tales, and heard of people suffering horrible pain.

We do not know how much he saw of his parents, but he did state in later life that he was very impressed by his paternal aunt, who was a woman of aggressive and commanding nature.

She was also somewhat imperious and cruel. He told how once, when asked to put on her slippers, he kissed her ankle. He was rewarded by a sharp kick in the face. This seems to have provided him with a lesson which he never forgot.

At another time he was in her bedroom when she returned unexpectedly, and he hid in a cupboard. He saw her making love with a man other than her husband. This also may have influenced his later behavior.

When he was 10 years old, he witnessed an unsuccessful revolution, with much actual bloodshed. Later he had an exactly similar experience in Prague. This also may have affected his outlook. He was educated at Prague and, at the behest of his father, studied law. Later the family moved to Gratz, and he was granted the degree of Doctor of Law at the University.

Sacher-Masoch discovered that he had a literary gift, and started writing history. But soon he commenced publishing the novels upon which his reputation rests. Unfortunately they are strongly toned with his attitude towards sex, and so have become notorious for the longing to be hurt which is synonymous with his name.

His sexual life demonstrates his urge to be hurt, and his desire for his loved one to betray him with another man. At first he was involved with a very masterful woman, the wife of a doctor, who was 10 years his senior and who had given birth to 2 children. She was Anna von Kottowitz. To his delight she was unfaithful to him and bullied him unmercifully. Unfortunately her unfaithfulness resulted in her contracting syphilis, which was then quite incurable, and there the affair ended.

Then he met another woman, Fanny Pister, who went with him on a trip to Italy. He traveled, at his own request, as her valet. She treated him very badly, to his great delight, and made him do the most menial and humiliating things.

This affair formed the basis of his later novel, Venus in Furs, and in it the lovely Wanda made her lover sign a contract that he was her slave. Such a contract was actually signed by Sacher-Masoch and Fanny Pister before they went to Italy. Indeed, he was very fond of such contracts.

This affair broke up and he had various love affairs, first with a young French actress, by whom he had a child, and then with other women, all with the same masochistic elements.

Eventually he married a woman named Aurora Rumelin and lived with her for some years. They had children, but she grew tired of his constant appeals that she should be unfaithful to him, and his repeated demands to be flogged.

All this time he was earning his living by his novels which all contained the same sort of things which he demanded in real life: flogging, humiliation and degradation.

After he parted with Aurora Rumelin, he had a prolonged affair with a German secretary, Hulda Meister, with whom he was living when he finally became insane. He appears to have developed this mental illness when he killed a kitten, and told poor Hulda Meister that he had discovered the delights of murder.

As a result of his psychosis he had to be confined in a mental hospital where he finally died in 1905 without recovering his sanity.

Was Sacher-Masoch a great nov- elist? I fear that one must state definitely that he was not. His characterization was poor and his stories seem to have been constructed merely to allow him to indulge in his pet deviations, which he describes with all the coy delight of a spinster telling one of the awful things which the girl next door does when her parents are out.

His most famous novel is Venus in Furs. In it he wrote: “I have said more than once that pain has a rare charm for me, that nothing impassions me so much as the tyranny, the cruelty, and, above all, the infidelity of a beautiful woman. . . . From what I can see, that lends something commanding and imposing to a woman.”

“At an early age I was developed and excited in this sense, for at 10 years of age I was given the lives of the martyrs to read. I remember I read with a horror, which was a veritable ravishment for me, how they languished in prison, were stretched on the rack, pierced with arrows, boiled in pitch, thrown to wild beasts, crucified, and endured the greatest atrocities with a sort of joy. To suffer, to bear cruel tortures, seemed to me henceforth a species of pleasure, and particularly so if these tortures were inflicted by a beautiful woman; and it is thus for me and for always, all poetry and all infamy were concentrated in women.”

He continues like this for 192 pages through various floggings and bitter-sweet humiliations.

Undoubtedly, since the novels of Sacher-Masoch were popular in his time, this sort of thing appeals to a section of the population. Now it has been replaced by the detective tale in which the hero is beaten up by thugs and left bleeding in the gutter, the secret agent tortured to make him reveal what he knows, and so forth.

Why did Sacher-Masoch delight in writing the sort of stuff which he did? There is no doubt, if one can endure studying his work, that he undoubtedly enjoyed his literary output, perhaps because this enabled him to give his fantasies some sort of reality, even if only on paper.

I think that his fantasies were linked back to his childhood experiences and by his writing he was able to give release to them. Unfortunately we do not know much of his childhood, but we can deduce a certain amount from the facts which are known.

We know nothing of his mother but he seems to have been influenced by his stern, imperious, cruel paternal aunt who kicked him in the face because of a childish caress. Moreover, he stated that he saw this aunt committing adultery with her lover while he was concealed in her room. Can it be this which gave him such a strong impulse to make his mistresses betray him? It seems that it may, at least, have reinforced some deep-seated urge to be treated in this way.

The horrible folk-tales told him by his nurse and revealed again in the pictures of martyrs being burned and flayed alive, must have directed his fantasies strongly towards punishment, betrayal and cruelty.

Yet there was probably even more to it than this. We know that our instincts and emotions which accompany them, are biologically arranged for us to deal with the outside world. When we are angry we attack, when frightened we run and so on. Now hate and anger are meant to be directed to some object which, unhindered, we will kill or destroy. But when that is impossible we tend to turn the anger back on to ourselves.

This was the sort of thing which had happened to Sacher-Masoch and which suggests that every masochist is a sadist at heart. In the last sad episode in Sacher-Masoch’s life he killed a kitten, perhaps even accidentally. But this was a revelation to him. He suddenly discovered that he could become just as sexually excited by hurting other living things as by being hurt himself. At once he started to praise the delights of murder. He wanted to go on killing. He had to be shut up in a mental hospital for the safety of others.

The essential difference between the sadist and the masochist is that the sadist turns his destructive impulses outwards, and so is a menace to society. There is always the danger that sooner or later he will kill somebody. The masochist, on the other hand, turns his impulses toward himself, and so wishes to hurt himself. Hut this is not a very safe solution and there is always the possibility that his defenses may break down.

Sacher-Masoch lives on only through the deviation which bears his name. If he had written novels along more normal lines, describing the lives and loves of his heroes and heroines, and the happenings of ordinary people, he would have disappeared from literature as surely as the other minor novelists who lived at that time.

————————————
Dr. Allen, Consultant Psychiatrist to the Dreadnaught Seamen’s Hospital, Greenwich, London, and to the English Ministry of Pensions, is author of “A Textbook of Psychosexual Disorders,” “Modern Discoveries in Medical Psychology” and “The Sexual Perversions and Abnormalities,” and co-author of “The Problem of Homosexuality.”