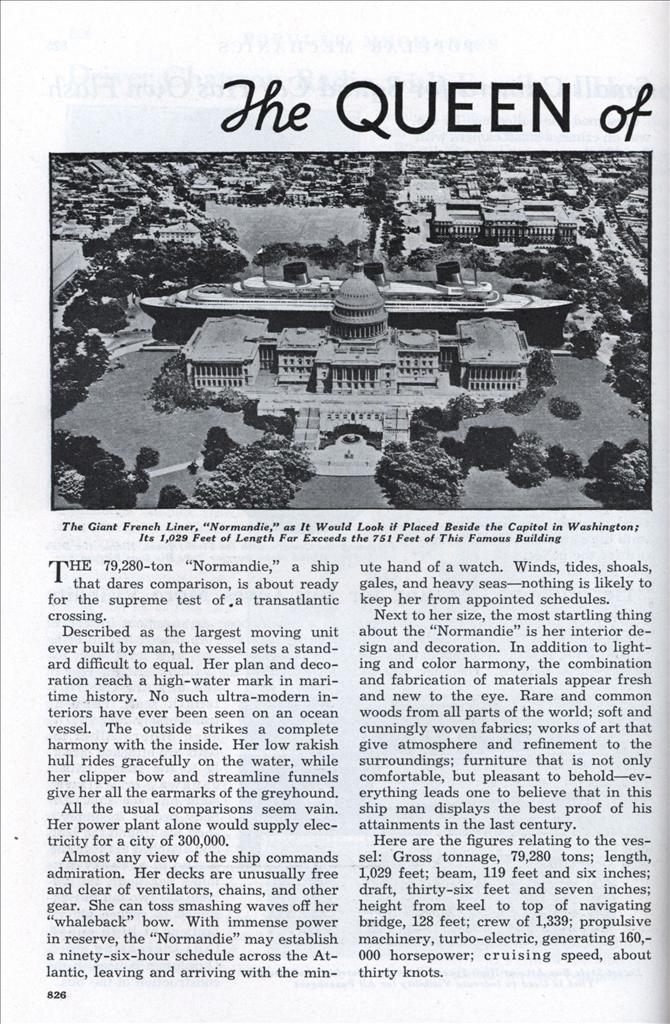 The QUEEN of the SEVEN SEAS

THE 79,280-ton “Normandie,” a ship that dares comparison, is about ready for the supreme test of a transatlantic crossing.

Described as the largest moving unit ever built by man, the vessel sets a standard difficult to equal. Her plan and decoration reach a high-water mark in maritime history. No such ultra-modern interiors have ever been seen on an ocean vessel. The outside strikes a complete harmony with the inside. Her low rakish hull rides gracefully on the water, while her clipper bow and streamline funnels give her all the earmarks of the greyhound.

All the usual comparisons seem vain. Her power plant alone would supply electricity for a city of 300,000.

Almost any view of the ship commands admiration. Her decks are unusually free and clear of ventilators, chains, and other gear. She can toss smashing waves off her “whaleback” bow. With immense power in reserve, the “Normandie” may establish a ninety-six-hour schedule across the Atlantic, leaving and arriving with the min * ute hand of a watch. Winds, tides, shoals, gales, and heavy seasâ€”nothing is likely to keep her from appointed schedules.

Next to her size, the most startling thing about the “Normandie” is her interior design and decoration. In addition to lighting and color harmony, the combination and fabrication of materials appear fresh and new to the eye. Rare and common woods from all parts of the world; soft and cunningly woven fabrics; works of art that give atmosphere and refinement to the surroundings; furniture that is not only comfortable, but pleasant to beholdâ€”everything leads one to believe that in this ship man displays the best proof of his attainments in the last century.

If you were “stranded” for life on this floating island, there is scarcely a thing you would miss, for this ship provides food, shelter, medical care, libraries, theaters, gymnasiums, swimming pools, newspapers, radio reception, barber shop, hairdresser, tailors, art galleries, and dozens of amusements. You could purchase a complete wardrobe in the “Normandie’s” shopping center. And by mingling among the widely traveled passengers, you could learn the important languages of the world. It required the labor of thousands over a period of five years to make this ship possible. Passenger accommodations set new standards of luxury in travel. The “Normandie” boasts two suites, each with its own private deck thirty by eighteen feet, and twelve suites with private verandas. There are children’s play rooms, card rooms, a shooting gallery, a massage salon, three hospitals, florist shop, photographic studio, therapeutic, electric vapor and steam baths, a garage for 100 autos, dog kennels, dog washing pool and a dog promenade.

The ship’s third class is placed near the stern instead of within the narrow confines of the bow, and the sun deck is large enough to be used as an airplane landing field, measuring 300 feet in length and seventy-five feet in width. It is unobstructed by ship gear and offers sufficient room for almost any outdoor sport.

A winter garden in the first class is 112 feet long and thirty-nine feet wide. The grand foyer is ninety-five feet long and three stories high and from it, elevators will carry passengers to any one of the ship’s eleven decks. The theater seats 350 and can be used either for sound movies or regular plays. The swimming pool is 112 feet long and thirty feet wide, with a graduated depth. Diving and swimming contests can be held here without difficulty. In addition to eight private dining rooms, the first class dining salon is 300 feet long and three decks high, making it one of the largest dining rooms in the world, afloat or ashore.

With automatic alarms and fire-fighting equipment, the “Normandie” will carry a special squad of professional firemen. The security officer who commands the firemen, has nothing to do but maintain a constant vigil against fire. All walls and cabin partitions are rendered fire-resisting by a sheet of duralumin between layers of asbestos. Placed between the outside wall covering, this metal sheet and asbestos act as a fire wall. Each cabin has a fire detector which, when the temperature of the room reaches an abnormal degree, rings an alarm in the central fire station, and automatically closes all ventilators in that section of the ship. The electric circuit in most of the cabins is independent of the others; and in the ceiling of each cabin is a hole, accessible to firemen in emergency. If the power fails, the passengers will see their way with the aid of phosphorescent signs. Several radio transmitters operate independently of the ship’s power plant.

The amazing thing about this vessel is that so few men are required to operate it. Actually, only 400 men are needed to keep er running continuously. The other members of the crew are for the service of passengers. But if human hands were re-quired to do the work performed by the instruments on the captain’s bridge, a small army would have to be enlisted. The bridge has telegraph and telephone equipment, gyroscopic compass repeaters for the watch officers and helmsman, an automatic gyro-pilot, which keeps the ship on her charted course, and hydraulic telemotor apparatus.

Squeaking and creaking have been virtually banished by the use of fireproof flannel between uprights and in the partitions. The flannel not only eliminates squeaks, but insulates cabins against noise.

In terms of food, the “Normandie” will be a connoisseur’s delight. The ship’s galley has facilities for feeding an army. All cooking will be done by electricity. The range weighs twenty tons, which includes eight tons of sheet iron and five tons of insulating brick. The thirty roasting ovens can handle 768 chickens at one time.

When she comes across the ocean on her maiden trip, the “Normandie’s” funnels will discharge 150 tons of smoke! But thanks to wind-tunnel tests and careful designing, this smoke will be wafted into the air and not into the faces of passengers.