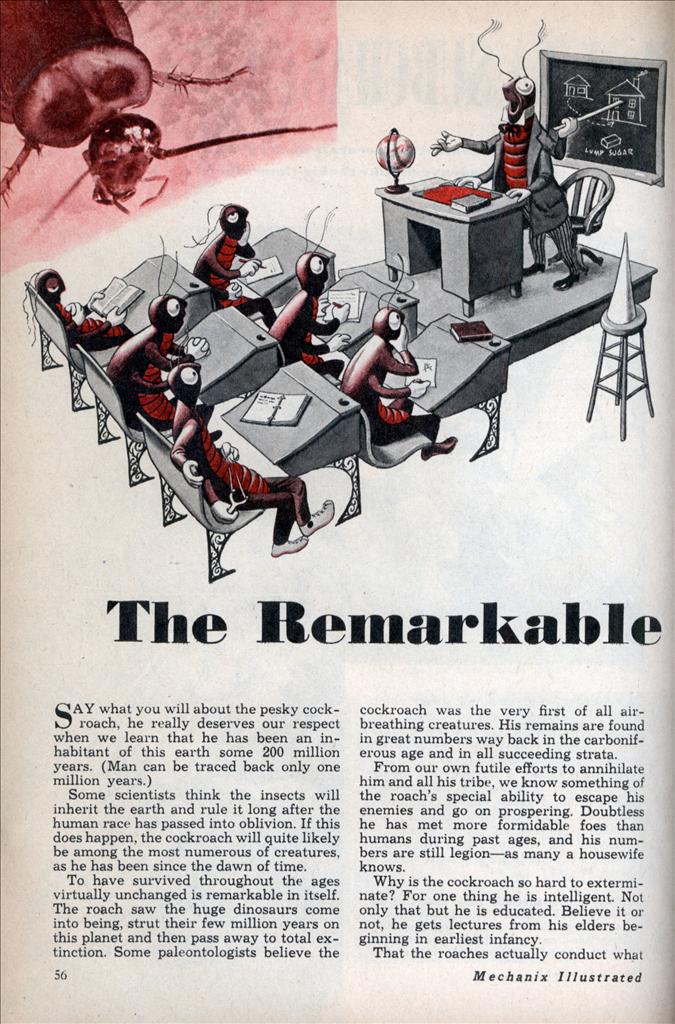 SAY what you will about the pesky cockroach, he really deserves our respect when we learn that he has been an inhabitant of this earth some 200 million years. (Man can be traced back only one million years.)

Some scientists think the insects will inherit the earth and rule it long after the human race has passed into oblivion. If this does happen, the cockroach will quite likely be among the most numerous of creatures, as he has been since the dawn of time.

To have survived throughout the ages virtually unchanged is remarkable in itself. The roach saw the huge dinosaurs come into being, strut their few million years on this planet and then pass away to total extinction. Some paleontologists believe the cockroach was the very first of all air-breathing creatures. His remains are found in great numbers way back in the carboniferous age and in all succeeding strata.

From our own futile efforts to annihilate him and all his tribe, we know something of the roach’s special ability to escape his enemies and go on prospering. Doubtless he has met more formidable foes than humans during past ages, and his numbers are still legionâ€”as many a housewife knows.

Why is the cockroach so hard to exterminate? For one thing he is intelligent. Not only that but he is educated. Believe it or not, he gets lectures from his elders beginning in earliest infancy.

That the roaches actually conduct what appears to be classes for the young was discovered just recently by Dr. Vladimir Tuma, who has probably had close association with more of these insects than any man living. As consultant on insecticides for a great chain of five-and-ten stores, he raisedâ€”and killedâ€”some 25 or 30 million of them over a ten-year period.

This is the incredible procedure Dr. Tuma has observed time after time among his insect charges: A whole family of baby roaches gather in a semicircle facing an adult male who stands facing them. While the young ones give every evidence of paying close attention, the professor delivers a lengthy lecture which consists of an elaborate series of manipulations of his long horns, or feelers.

The lecture comes to an end and the teacher stands quiet a moment. This is doubtless time for the youngsters to recite the lesson, and this they all do by waving their antennae in the air. Suddenly there must be a signal from the old-timer. Class is dismissed. The pupils scatter in all directions exactly like human youngsters let out of school.

Who can doubt, asks Dr. Tuma, that this is a form of education? He is convinced of it.

Assuming that this is a class for the young, what would the professor be teaching them? We may well imagine that it is a pretty thorough course in teaching the facts of life. He may not tell them about the bees, but he probably does about the birdsâ€”one of their natural enemies. He probably imparts to them the wisdom of the ages in those few minutesâ€”all that has been learned in the 200 million years the hardy tribe has lived on this old earth.

The professor may caution the babies about not getting fat, for the roach owes his escape from enemies largely to the fact that he has always kept an incredibly thin body so that he can dart into the smallest cracks and crevices. Doubtless the young are taught also to stay out of the lightâ€”another of their habits that makes them hard to catch. The roach is so sensitive to light that he can seek and find a dark place even when its eyes are totally blinded.

Everybody has noticed that roaches go abroad only when the house is dark. If they had their way they would spend their whole lives in darkness, and this accounts for our comparative ignorance about their family life. Dr. Tuma was able to observe them in natural movements only by sitting in semi-darkness until his eyes were able to see them.

The roach’s body is perfectly designed for crawling into fine cracks. Broad and long though it may be, it is very thin up and down. Even its head is tucked under and its jaws move from side to side, not up and down, so the roach can chew his food even in a tiny crevice.

The roach’s antennae are remarkable organs. Much longer than his body, they sometimes have as many as one hundred joints. With these he smells out his food, and there is no telling how many other functions they perform for him. Doubtless they feel vibrations and thus warn of the approach of enemies.

It may be the sensitive feelers that keep the roach from eating poison, too. At any rate he is exceedingly hard to kill by that method. He can detect the slightest amount of arsenic and will not touch the most tempting food that has a trace of it. Also the roach avoids any food that is spoiled, as Dr. Tuma has proved beyond a doubt. He says, in fact, the roach is very cleanly about its person and quickly cleans off any undesirable material encountered.

It is because of this trait that we are able to kill roaches with sodium fluoride. They do not eat this poison, but after running through it they draw their feet through their jaws to clean it off and thus get enough of it in their systems to be killed.

Despite the reputed power of DDT as an insect killer, it is not too effective against roaches. It will kill them if put directly on them in strong enough concentration, but here their habit of staying in cracks again protects them and it is hard to get the stuff directly on them. Sprayed on walls, DDT seems to have little effect on the German cockroach, which is the little light brown fellow most prevalent along the eastern seaboard. The big American roach of the South falls victim more readily to residual DDT on walls and floors because he gets his body into it more than the German variety .

The favorite weapon of the exterminators against cockroaches still is sodium fluoride. This is the familiar blue-green powder that is dusted about where ever roaches can pass over it. It is originally a white powder but it is required by law in some states to be colored so that it may readily be distinguished from flour and other foodstuff.

There are two forms of poison that the roach has not yet learned to avoidâ€”phosphorus and boric acid. These are the ingredients generally found in commercial types of roach bait. Boric acid is effective when mixed with food that roaches like, and they will also drink water with a concentration of it strong enough to kill them. The phosphorous is more effective, for some reason, when placed on slices of raw potato.

Though there are some 1,500 species of cockroaches that have been identified by entomologists, only about four of these have become pests in this country. Strangely enough, no two species ever infest the same building.

The huge cockroach of the South that is an inch and a half long when full grown is a native of tropical America. This is the big reddish-brown variety that flies when he wishes to. An Australian roach very much like this one has been imported to this country, probably in ship cargoes, and is difficult for the amateur to distinguish from the native species.

The German roach, chief roach pest of the highly populated northeastern states, is about a half-inch long, light brown and does not fly, though it has wings. This is also called the waterbug and the Croton bug. This latter name was acquired when large numbers of the roaches were attracted to the Croton waterworks after they were built in New York. The reason for this apparently sudden infestation probably was the roach’s natural affinity for damp places. He must have water, and will find it in one way or another.

The fourth species of roach seen in this country is the Oriental, sometimes called the black beetle. It is larger than the German but much darker in color and much less prevalent.

One reason why the roach gets along is that he seems to eat almost anything; On his known diet, besides all the more reasonable kinds of foodstuffs, are bones, hair, whitewash, leather, bookbindings, shoeblacking, ink and paint. Dr. Tuma, who has had every opportunity to study roaches’ eating habits, believes that much of the stuff they apparently eat is not really consumed but that they attack it in order to extract a small amount of water from it. He has found them rather choosy about food, he says.

If there is no food available the roach can still survive for a long while. Specimens in captivity have been kept living as long as 76 days with no food at all. This is just another item in their list of special abilities to get along under adverse conditions. The roach professor may give the young ones a special course in how to live without food.