Popular Science
Issue: Dec, 1946
Posted in: Cool, Sign of the Times, Toys and Games
Tags: christmas
5 Comments on The Return of The Toys (Dec, 1946)

Gallery of new toys for the 1946 Christmas season, the first one toy makers could gear up for after WWII. Check out the “reaction jet engine” on page 3 and the proto-legos on the last page. 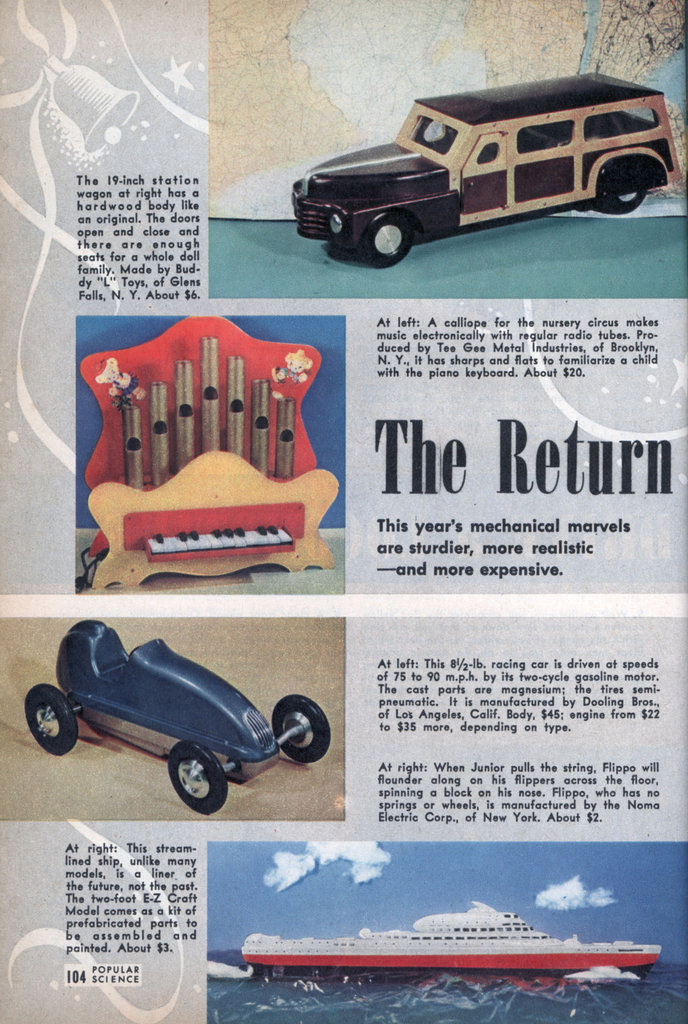 The Return of The Toys

The 19-inch station wagon at right has a hardwood body like an original. The doors open and close and there are enough seats for a whole doll family. Made by Buddy Mt” Toys, of Glens Falls, N. Y. About $6.

At left: A calliope for the nursery circus makes music electronically with regular radio tubes. Produced by Tee Gee Metal Industries, of Brooklyn, N. YM it has sharps and flats to familiarize a child with the piano keyboard. About $20.

At left: This 8’/2-lb. racing car is driven at speeds of 75 to 90 m.p.h, by its two-cycle gasoline motor. The cast parts are magnesium; the tires semi-pneumatic. It is manufactured by Dooling Bros., of LoS Angeles, Calif. Body, $45; engine from $22 to $35 more, depending on type.

At right: When Junior pulls the string, Flippo will flounder along on his flippers across the floor, spinning a block on his nose. Flippo, who has no springs or wheels, is manufactured by the Noma Electric Corp., of New York. About $2.

At right: This streamlined ship, unlike many models, is a liner of the future, not the past. The two-foot E-Z Craft Model comes as a kit of prefabricated parts to be assembled and painted. About $3.

The sturdy little “Buna” choo-choo, above, goes ’round and ’round and ’round on a self-contained flashlight battery. The current vibrates a spring shoe in the engine that pushes against the notched track. No wires or winding. About $5.

A child will find himself making invisible ink before he can say “potassium thiocyanate” with Lionel’s new Chem-Lab, above. A comic book, each page explaining a chemical experiment, carries him along to the story’s conclusion.

Below: This 26-pound, 40-inch-long “handcar” operates like the real thingâ€”by moving its hand levers forward and backward. It is made by the Kalamazoo Mfg. Co. About $18.

Above: Bridges, skyscrapers and a variety of other structures can be built with this aluminum construction set. It includes a riveting tool and blueprints. It is a Fox Toy Co. product. About $3.

Below: This miniature reaction engine is made by Minijet Motors for model planes, racing cars and speedboats. It uses regular gasoline, has a three-pound thrust, weighs 16 ounces. About $35.

At right: Keeping up with the times, model-airplane builders now stress jet planes. Mel Farrell’s Shooting Star kit is made to scale. About 75 cents.

Below: Precision-molded for balance, with a smooth surface that reduces air and point-of-contact friction, the plastic top is a marathon spinner. Made by Plastic Molded Products, Inc. About 50 cents.

Below: This three-quarter-size telephone set can be used for room-to-room calls. Flashlight batteries supply its current. Pengo, Inc., makes the set, which includes 50 feet of wire. About $12.

Below: Knee-action wheels are featured In the Keeco Flyer aluminum roller skates. A pair of the skates weighs a pound, needs no oil. About $7.50.

A magnet hidden in his mouth enables Nippy the Pup to snap at a metal-cored plastic bone and hold it fast. Made by Winchester Toy Co., of Philadelphia. About $6.

Lionel trains have gone electronic. Ten different medium-frequency waves, controlled by buttons on the transformer below, stop and start trains, couple and uncouple cars, sound the whistle, and activate unloading devicesâ€”all anywhere along the line. The tiny receivers are no bigger than a watch. The smoke-puffing train in bottom photo sells for $75. Service stations will convert older types.

Below: The scale-model American Flyer cars are plastic and weigh only one-third as much as metal cars, permitting longer, more realistic trains.

Above: From England come these miniatures of standard English automobiles, powered by spring motors. They are made by Tri-Ang Minic Lines Bros., Ltd., of London. The larger types, $2; the smaller, $1.25.

This scale-model bucket loader works just like an original. The model earth hauler dumps its load when a lever is pressed. The Charles W. Doepke Mfg. Co., of Cincinnati is not yet in full production. Bucket loader, about $14; earth hauler, $12.75.

Latent construction talents of the playroom set can be developedâ€” if father doesn’t steal the actâ€” with the Vinylite plastic building sets produced by the Du Page Plastics Co. A complete village (upper right) of 30 buildings can be built with plastic bricks (above), scaled ‘/* inch to one foot. In building, dowels are inserted in a perforated baseboard and the blocks are slipped on the dowels. The village comes with homes, stores, factory, public buildings, gas station, theater, hamburger stand, airport building and a real electric-light plant.

Then there are windows, doors, shutters, flower boxes, imitation glass bricks, sandpaper strips for streets, and toweling to represent grass and shrubbery. The boy at right is building a typical home. Below is a wall showing the supporting dowels. The sets come in 10 sizes, the smallest with 400 pieces for $4, the largest with 3,500 pieces for $27.50.