Popular Mechanics
Issue: Sep, 1934
Posted in: General, History
No Comments on The Scenic WONDERS of the WORLD (Sep, 1934)

Burton Holmes was apparently quite the Extraordinary Traveler. 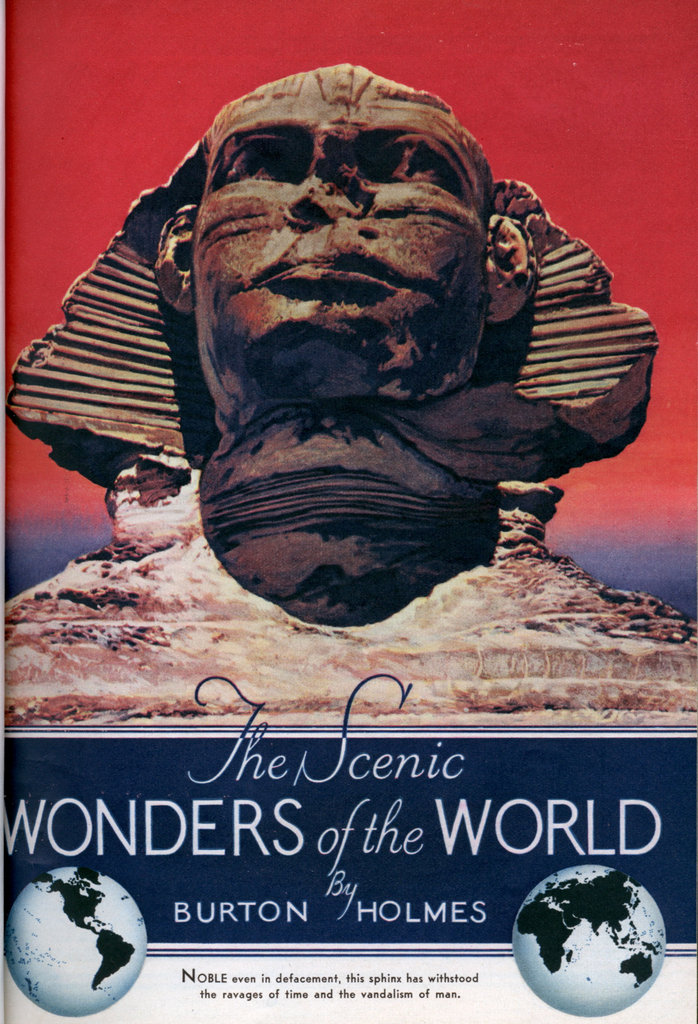 The Senic WONDERS of the WORLD
By BURTON HOLMES

THE nine most interesting places in the world? I should not dare to try to name them. But I can give you a list of those which to me have seemed to offer more of interest than any other nine that I have known. Firstâ€”The Grand Canyon of Arizona. Why? Because I love beauty and it is the biggest beautiful thing in the world. It is unique because the earth can show nothing to equal it in beauty, gorgeous-ness of color, grandeur, impressive weirdness and immensity.

Secondâ€”The Cataracts of the Iguassu in South America, on the border where Brazil and Argentina meet. Higher by sixty feet than Niagara’s mighty cataracts, those of the Rio Iguassu are far more beautiful. Their beauty is un-marred by the presence of hideous buildings on the brink or scrawny bridges spanning the rapids or chimneys lifted into a polluted sky. Remoteness from the world of man endows the Iguassu with a fascination possessed by no other great cataract save that of Kaieteur in British Guiana. Even the still greater, higher falls of the Zambesi in Africa have lost that charm that isolation lends to a great natural wonder.

The Iguassu river makes its plunge of more than 200 feet, not in one single fall, but in a series of numberless cascades and cataracts which pour over the high brink of three enormous, separate, amphitheaters that indent the highland wilderness in sweeping curves over a total width of more than two miles. Each of these amphitheaters rivals the horseshoe of Niagara and surpasses it in both depth and picturesqueness. Each separate fallâ€”and there are scores of them, save when the rainy season merges all into three mighty distinct cataractsâ€”makes a double leap, with the exception of the grandest fall of all, called the Great Fall of the Garganta del Diablo, the “Devil’s Throat,” which plunges the full 210 feet in one majestic curtain of moving waters, veiled by clouds of spray.

Thirdâ€”Venice, the queen of the Adriatic, an Italian city, yet a city that is oriental in its richly tinted beauty. Venice is unique as well as beautiful. There is no other city like it in the world. Not only beauty but the romance of history and the glory of art abide in Venice.

Fourthâ€”the Palace of the Alhambra which dominates from its high hill the Spanish city of Granada and the fertile plain which the Moors transformed into the richest farmland of their Moslem kingdom centuries ago. There are many grander, costlier palaces in other European lands, but they are without the peculiar eharm that pervades the Alhambra. It stands as the most precious memorial of the Moorish age of glory. It was a Saracenic paradise created by the masters of old Spain 600 years ago. It is today one of the most romantic beauty spots of the modern world.

Fifthâ€”The Acropolis of Athens, crowned by the Parthenon. Of all earthly temples, the Parthenon is pre-emi-nently the noblest. It is still, after more than twentv-three centuries, the one unrivalled, perfect architectural creation of all time. In grandeur, dignity, simplicity and perfection of proportions, it has never been equalled, it has served as a model for the architects of all succeeding generations. Pericles and his designers achieved absolute perfection when they crowned the sacred Acropolis with the immortal Parthenon.

Sixthâ€”The Pyramids of Egypt and the Sphinx. No other two names are richer in suggestions of impressiveness and mystery. Fortyâ€”nay, fiftyâ€”centuries look down from these immemorial creations and command us to include this burial place of the Pharaohs among the supremely interesting places known to modern man.

Seventhâ€”The Taj Mahal of Agra in old India. It stands today in all its pristine beauty and perfection as the loveliest building now existing in the orient. The nobler beauty of the Parthenon has been marred by the hand of time and the vandalism of man, but the Taj Mahal, mellowed a little by the passing of a mere 300 years, delights and satisfies the eyes of all who look upon it. To linger in the garden of the Taj by moonlight is to experience the purest aesthetic thrill within the reach of modern man.

Eighthâ€”The Angkor Vat, grandest creation of the ancient Khmers in the reclaimed jungle of Cambodia. The Angkor Vat, lost for centuries in a trackless wilderness of verdure, is still clothed with mystery as impenetrable as was the forest that once overwhelmed and buried it. The most interesting days I have ever known were lived in and around the Angkor Vat. Near it I found a vast abandoned city which had been, in the eleventh and twelfth centuries, the abode of a metropolitan population of over a million souls. That population has completely disappeared, leaving no record of the reason Tor its sudden vanishing.

The jungle possessed itself, for centuries, of all the splendid monuments that tell today the storv of the wealth and the artistic prowess of the Khmers, and of their great conquests in war and of their worship of the Gods of Hinduism and later their devotion to the teachings of the Buddha. There are no written records. The story is told in pictures â€”thousands of pictorial reliefs carved on the stones that form the walls of the long galleries of the Angkor Vat and other older temples. The romance of travel cannot die while the dead glories of Angkor wait for the traveler to thrill him with their beauty and the appealing mystery of the unanswerable questions that they raise.

In any other land things of fragile beauty such as these would have succumbed long since, victims of vandal hands or of neglect. But happily the love of beauty, innate in the Japanese of earlier generations, has insured their preservation. Today they stand as perfect in their colorful sculptured wooden beauty as the Taj Mahal in its pale marble. The wooden glories of Nikko are contemporaneous with the marble glories of Agra, yet both have won victories over their common enemiesâ€” time and neglectâ€”and both still delight and inspire all who behold them.

The Taj was reared by a great Mogul emperor as a tomb for his beloved wife, as a memorial to a great, passionate love. The Shrines of Nikko were created by the pious artists of the old Japan in honor of the Shogun Iyeyasu, founder of the Tokugawa dynasty of military rulers of feudal Japan. Iyeyasu reigned about 300 years ago. He was absolute masterâ€”yet he was not Emperor, not the Mikado, not even of imperial blood. The Mikados of his time, like the divine emperors of earlier centuries, were helpless holy puppets, never seen by their subjects, kept in sacred seclusion in the palace of Kyoto. There they reigned. But they never ruled the land, never directed the destinies of the people who regarded them as gods on earth, too holy to be seen of men. The ruling of their empire was in the hands of stern self-made men of genius of whom Iyeyasu was the greatest. Thanks to them, Japan was made a hermit nation and for 250 years she had no contacts with the outer world and she enjoyed internal peace.

The Shoguns lost their power in the revolution of 1869 which restored the Mikado to his temporal throne. But even today thousands of Japanese make pilgrimages to Nikko every year to pray to the deified spirits of men of a distant yesterday who sleep their last sleep amid the temples in the silence of a sacred forest.