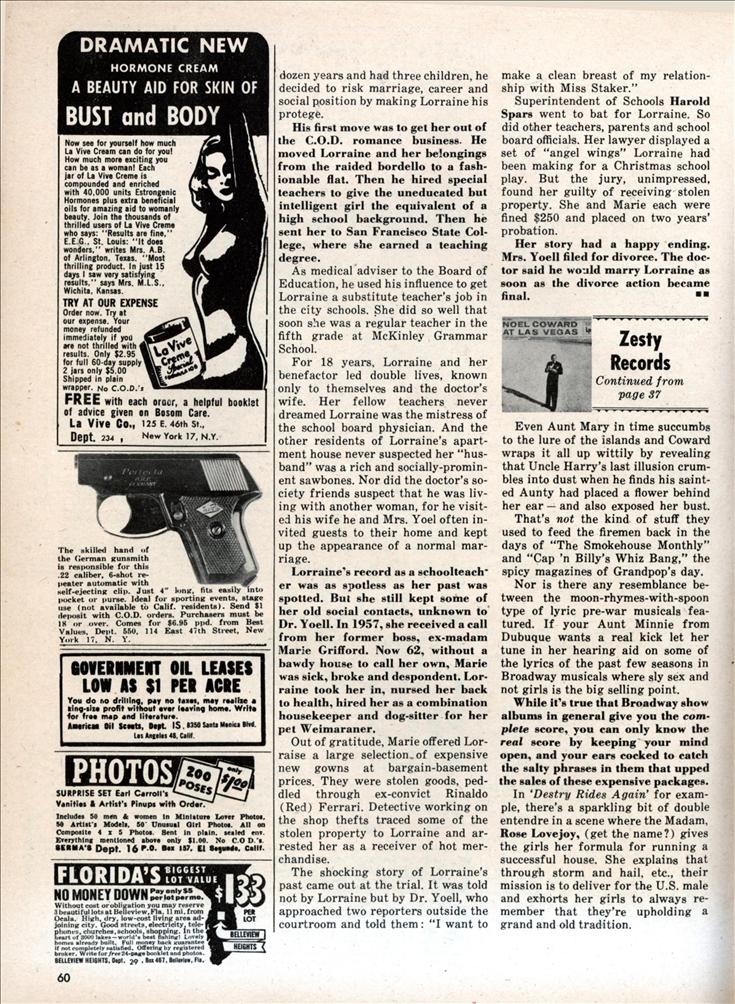 There’s a new kind of blue note on this racy hit parade!

The hi-fi was giving out with Les Brown as the smartly-dressed guests cut a rug in the Park Avenue apartment of a Cafe Society playboy. Champagne and Scotch flowed freely and high-pitched laughter mingled with the deeper rumble of male mirth. Seductive women, reasonably handsome men, a luxurious apartment, what more could anyone ask?

Somebody did ask for more, for suddenly, the hi-fi stopped in mid-music. Dancers stood in the middle of a step and looked annoyed, but politely, at their host, who stood at the expensive record player. He had a batch of albums in his arms. “Hold on just a minute, folks,” he said. “Charlie Blake just sent these recordings over and I thought you’d like to hear them.”

Seemed to Be on the Make A moment later, a feminine voice, soft and seductive, filtered through the loud speaker; obviously addressed to a man with her. The guests looked at one another, wondering whether a practical joke was being played on them. Then, suddenly, wide smiles spread over their faces as the record ground on and they realized they were listening to a conversation between a high school boy and a high school girl.

But what a conversation! She feared that if she surrendered he would not respect her, and in a soft voice told him diffidently. “You wouldn’t respect me.” There was earnestness and passion in her voice, a plea praying for answer. Then, clear and fervently came the voice of the youth trying to seduce her, “I tell you here and now I’d respect you like crazy.”

Peals of laughter echoed through the room, punctuated by cries of “Where’d Charlie get that dirty record? Was it smuggled in? How’d he get it?”

It’s the New Look in Zest Their host smiled. “That’s no dirty record,” he said. “It’s one of the ten best sellers around today. That’s May and Nichols. You can buy it anyplace—but I never heard about it until today.” He held up the stack of albums he’d placed on a table. “Here’s some more— and everyone a public performance.”

Difficult to believe, maybe, but there’s actually a new look in zesty records today, and the inside story is that it’s called “ribald sophistication,” all so cleverly done that no one has taken offense, least of all the censors.

It was the late Billy Minsky who said that “downtown burlesque is called bawdy, but put the same thing uptown in a Broadway show and it’s called art.”

That’s just about the status certain best-selling record albums enjoy today. Indeed, to call some of the songs in many Broadway albums risque would come dangerously close to being euphemistic. Smart or smutty, it’s a cinch the public wants them. In 1958 alone these racy platters accounted for some $40 million dollars in sales. They’re a far cry from the old days when ditties like “Mama Don* Allow It” and “Take Yo’ Finger Off It” were considered daring and played surreptitiously. (Lizzy Miles, incidentally, has re-recorded them for today’s listeners.) The crude and ribald songs of the veteran “shouters” of yesterday left nothing to the imagination. Today’s disks are different . . . they play on the imagination, conjure up zesty pictures, and what they do to the libido is a caution.

Tops among the newer sensations on sophisticated records are Elaine May and Mike Nichols. Their “Improvisations to Music” is both torrid and a treat, particularly their impression of a couple chatting against the background of a Bach concerto. At the beginning, they are simply two persons enjoying a tete-a-tete, but as their unaffected conversation drones on, pinwheel** begin to ignite as they discuss Adler, who to Elaine is more than just a man who made mice neurotic. “Much more,” 3ays Mike. “Much more,” says Elaine. And then comes the shatterer when Mike says solicitiously “Can you move over a little? I’m falling off the bed.”

If you haven’t gotten the idea by now, you won’t enjoy May and Nichols, who are making chatter-platters a national buy-word.

Your taste buds, though, might be satisfied with Noel Coward, whose “Noel Coward at Las Vegas” is another sleeper in the spate of sophisticated bawdiness.

In precise, meticulous English, Coward renders ditty after ditty that would bring blushes to the cheeks of the burliest dock walloper, particularly with “Uncle Harry” a missionary who sailed to the South Seas to lead the wretched heathen to the light.

Feted by the natives, all Harry wants to do is tarry, but his Aunt Mary will have none of it. Nevertheless, he rebels and, as Coward tells it, Harry lines all the older girls up in one of the local sheds for a revival meeting, but “while he was reviving them and tearing himself to shreds,” the local belles took their Mother Hubbards off and wrapped them around their heads.

Even Aunt Mary in time succumbs to the lure of the islands and Coward wraps it all up wittily by revealing that Uncle Harry’s last illusion crumbles into dust when he finds his sainted Aunty had placed a flower behind her ear — and also exposed her bust.

That’s not the kind of stuff they used to feed the firemen back in the days of “The Smokehouse Monthly” and “Cap ‘n Billy’s Whiz Bang,” the spicy magazines of Grandpop’s day.

Nor is there any resemblance between the moon-rhymes-with-spoon type of lyric pre-war musicals featured. If your Aunt Minnie from Dubuque wants a real kick let her tune in her hearing aid on some of the lyrics of the past few seasons in Broadway musicals where sly sex and not girls is the big selling point.

While it’s true that Broadway show albums in general give you the complete score, you can only know the real score by keeping your mind open, and your ears cocked to catch the salty phrases in them that upped the sales of these expensive packages.

In ‘Destry Rides Again’ for example, there’s a sparkling bit of double entendre in a scene where the Madam, Rose Lovejoy, (get the name?) gives the girls her formula for running a successful house. She explains that through storm and hail, etc., their mission is to deliver for the U.S. male and exhorts her girls to always remember that they’re upholding a grand and old tradition.

“In spite of amateur competition” she adds proudly.

A similar example of raffish humor can also be found in the “Pipe Dream” album when Fauna, owner of the local bordello describes a friend who drops in often because he’s kind of mixed up in his life. His trouble, she explains, is that he’s always longing for a home and a woman. But it only happens when he’s home with his wife, she adds.

Actually, though borderline prurience in disks is big business today, its been around and waiting to be mined by the record makers. In *Guys and Dolls4 for example there was ‘Take Back Your Mink4 which was slyly sung by Vivian Blaine and proved a show stopper. When the show was transferred to the movie screen some of the lyrics were edited. But good- They haven’t gotten around to putting ‘Happy Hunting’ the Ethel Merman hit of last season in movies yet, but it’s a cinch some of the lyrics will be bluepencilled, particularly “A New-Fangled Tango.” When ebullient Ethel sings it, she really sings about sex with no holds barred. To her there’s no getting away from the one big attraction of the new-fangled tango which, she shouts lustily, may not have much movement—but there’s plenty of action.

The listener doesn’t have to ask the guy on the right what is meant by ‘action.’ It’s all there—typical of the new fangled kind of best-selling platter, the sizzling sex disk in song.

Another incendiary item on wax that thus far has escaped the censors is ”Pardon My Blooper,* a collection of unintentional verbal goofs that is garnering smirks from Bangor to Beverly Hills. Four albums have been issued and each one has outsold the last. They’ve got everything Grandpa used to look for when he sneaked “Breezy Stories” into the backhouse—and more.

Probably the biggest titter provokers on these spicy disks are the “commercial announcements,” fluffs made by announcers. Since they’re presumably genuine (and most of them are) the censors have looked the other way at such gems as: “Remember, it’s Wonder Bread for the breast in bed.”

“And now stay tuned for 6I Love Loosely’.”

Even a horse racing commentator gets into the act when, announcing the day’s scratches, he tells listeners that “Harass is not going to run. Be sure to scratch Harass.”

The laughs come thick and fast on the “Blooper” records and, if the material seems to border on the raw, it at least has the excuse of having originally been unintentional. As such, they have the status of merely being reports of radio and TV goofs.

And who’s going to quarrel with a report? Certainly not a censor—even if they are the hottest item to come along since the Chicago fire.

“It’s the best thing that could have happened,” a prominent Broadway music store dealer told INSIDE STORY. “Now if a guy wants to liven up a party, he doesn’t have to know another guy named Joe who knows an under-the-counter place. He can walk in right off the street and get the bawdiest show around at Fair Trade prices.”