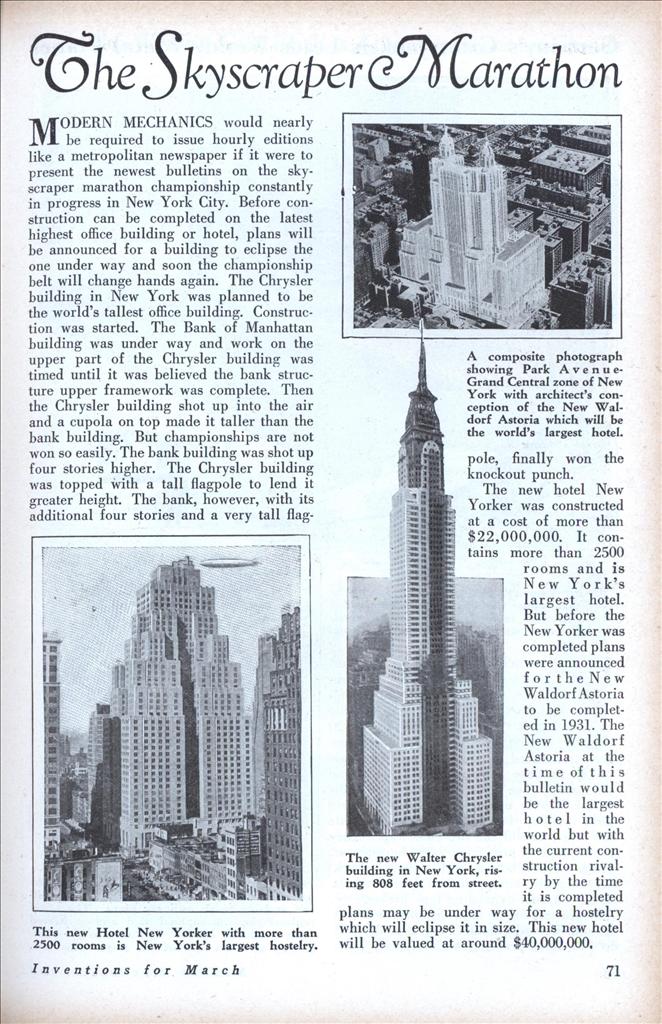 MODERN MECHANICS would nearly be required to issue hourly editions like a metropolitan newspaper if it were to present the newest bulletins on the skyscraper marathon championship constantly in progress in New York City. Before construction can be completed on the latest highest office building or hotel, plans will be announced for a building to eclipse the one under way and soon the championship belt will change hands again. The Chrysler building in New York was planned to be the world’s tallest office building. Construction was started. The Bank of Manhattan building was under way and work on the upper part of the Chrysler building was timed until it was believed the bank structure upper framework was complete. Then the Chrysler building shot up into the air and a cupola on top made it taller than the bank building. But championships are not won so easily. The bank building was shot up four stories higher. The Chrysler building was topped with a tall flagpole to lend it greater height. The bank, however, with its additional four stories and a very tall flagpole, finally won the knockout punch.

The new hotel New Yorker was constructed at a cost of more than $22,000,000. It contains more than 2500 rooms and is New York’s largest hotel. But before the New Yorker was completed plans were announced for the New Waldorf Astoria to be completed in 1931. The New Waldorf Astoria at the time of this bulletin would be the largest hotel in the world but with the current construction rivalry by the time it is completed plans may be under way for a hostelry which will eclipse it in size. This new hotel will be valued at around $40,000,000.