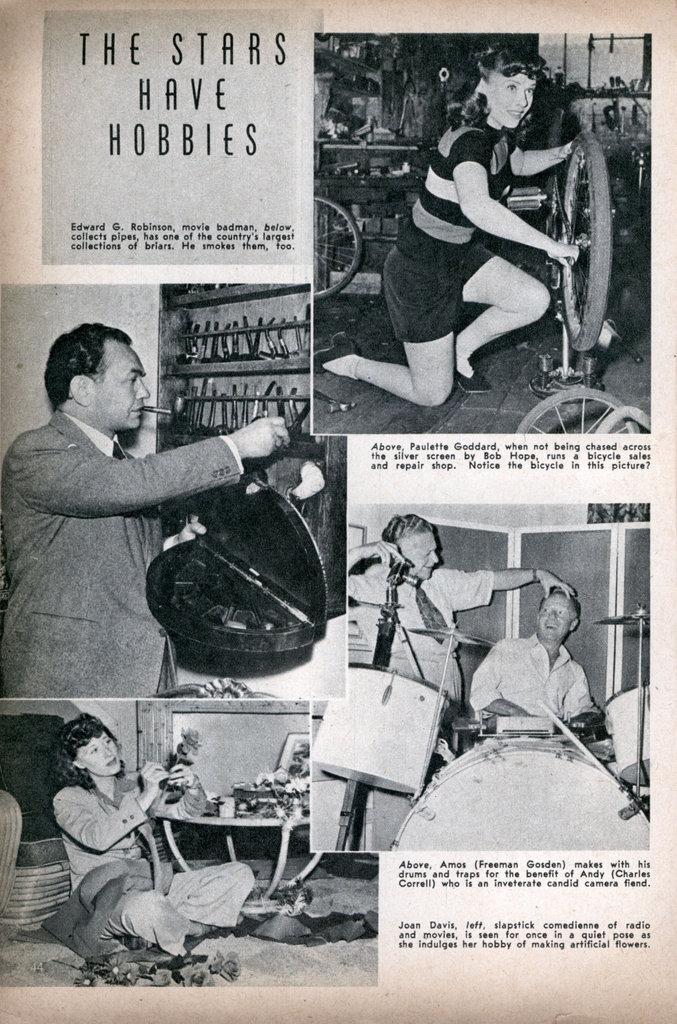 THE STARS HAVE HOBBIES

Edward G. Robinson, movie badman, below, collects pipes, has one of the country’s largest collections of briars. He smokes them, too.

Above, Paulette Goddard, when not being chased across the silver screen by Bob Hope, runs a bicycle sales and repair shop. Notice the bicycle in this picture?

Above, Amos (Freeman Gosden) makes with his drums and traps for the benefit of Andy (Charles Correll) who is an inveterate candid camera fiend.

Joan Davis, left, slapstick comedienne of radio and movies, is seen for once in a quiet pose as she indulges her hobby of making artificial flowers.

Above, Veronica Lake, blonde screen bombshell who soared to stardom on a wave of hair over one eye, uncovers both eyes for going over her stamp collection.

Rudy Vallee, star of radio and movies, below, rests his tonsils and his saxophone like Andy (opposite page) by turning to amateur photography in his spare time.

The worried-looking gentleman below is Fibber McGee, In private life James Jordan, probably thinking about next week’s radio script in his home workshop.

Above, Irene Rich, screen and radio actress, spends her time between roles and rehearsals with easal, palette and brushes. Results seem to be pretty good, too.