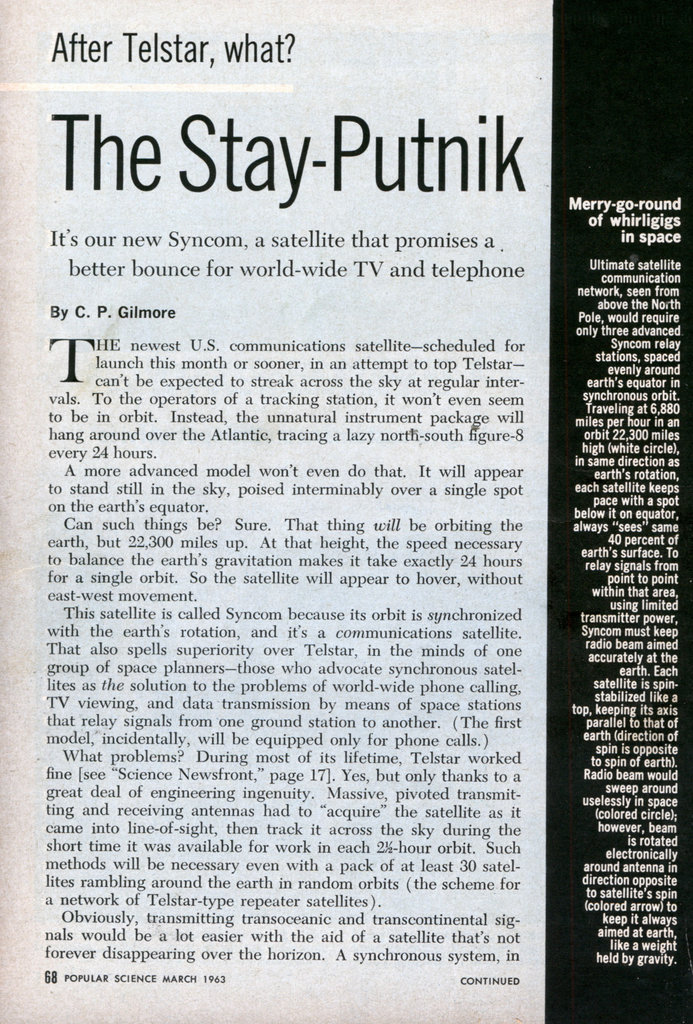 It’s our new Syncom, a satellite that promises a better bounce for world-wide TV and telephone

THE newest U.S. communications satelliteâ€”scheduled for launch this month or sooner, in an attempt to top Telstarâ€” can’t be expected to streak across the sky at regular intervals. To the operators of a tracking station, it won’t even seem to be in orbit. Instead, the unnatural instrument package will hang around over the Atlantic, tracing a lazy north-south figure-8 every 24 hours.

A more advanced model won’t even do that. It will appear to stand still in the sky, poised interminably over a single spot on the earth’s equator.

Can such things be? Sure. That thing will be orbiting the earth, but 22,300 miles up. At that height, the speed necessary to balance the earth’s gravitation makes it take exactly 24 hours for a single orbit. So the satellite will appear to hover, without east-west movement.

This satellite is called Syncom because its orbit is synchronized with the earth’s rotation, and it’s a communications satellite. That also spells superiority over Telstar, in the minds of one group of space plannersâ€”those who advocate synchronous satellites as the solution to the problems of world-wide phone calling, TV viewing, and data transmission by means of space stations that relay signals from one ground station to another. (The first model, incidentally, will be equipped only for phone calls.)

What problems? During most of its lifetime, Telstar worked fine [see “Science Newsfront,” page 17]. Yes, but only thanks to a great deal of engineering ingenuity. Massive, pivoted transmitting and receiving antennas had to “acquire” the satellite as it came into line-of-sight, then track it across the sky during the short time it was available for work in each 2/2-hour orbit. Such methods will be necessary even with a pack of at least 30 satellites rambling around the earth in random orbits (the scheme for a network of Telstar-type repeater satellites).

Obviously, transmitting transoceanic and transcontinental signals would be a lot easier with the aid of a satellite that’s not forever disappearing over the horizon. A synchronous system, in fact, can cover all populated parts of the world (but not the polar regions) with only three satellites, as long as they’re spaced evenly, right over the equator.

Sounds easy, but Syncom is about the trickiest device we’ve ever tried to launch into space. A few reasons:

â€¢ No satellite has ever been orbited with the kind of precision required by Syncomâ€”a combination of great height (at an unusually precise altitude) and a nearly circular orbit. Tricky correction maneuvers are needed to get the satellite to hover and set it at the proper angle.

â€¢ Since the satellite is so far away, signal strength is a problem. Ideally, the satellite’s radio beam should always point accurately at the earth. Satellites usually tumble and roll in space. Syncom will be spin-stabilized like a gyroscope, and its antenna’s transmission pattern will be manipulated to provide optimum coverage of the earth. (The pattern sent out by the first-model Syncom is a compromise solution.)

â€¢ Both problems have been solved, say designers, but the solutions are expensive, and things frequently go wrong once a satellite is working in space. So a practical Syncom must have unusually long life and high reliability.

â€¢ An unavoidable disadvantage of high-orbit operation is that it takes six-tenths of a second for a signal to travel 22,300 miles out and return (at the speed of light). This hurts phone conversation specifically. Ask a question, and you have to wait for the answer. How serious a matter it is remains to be seen.

Actually, the first satellite-communications schemes proposed involved synchronous satellites. The idea originated with scientist-writer Arthur C. Clarke back in 1945. But because of the difficulties, other kinds were tried to begin with: first, passive reflectorsâ€”the Echo balloon satellite; then low-altitude random orbitersâ€”Telstar and Relay.

But the synchronous satellite remained on the agenda. After a number of companies proposed solutions to the problems, the National Aeronautics and Space Administration told Hughes Aircraft: “You’re elected.” The men at Hughes figure they’ve got the answersâ€”as shown in our illustrations. Soonâ€”perhaps by the time you read thisâ€”we’ll know how right they are.