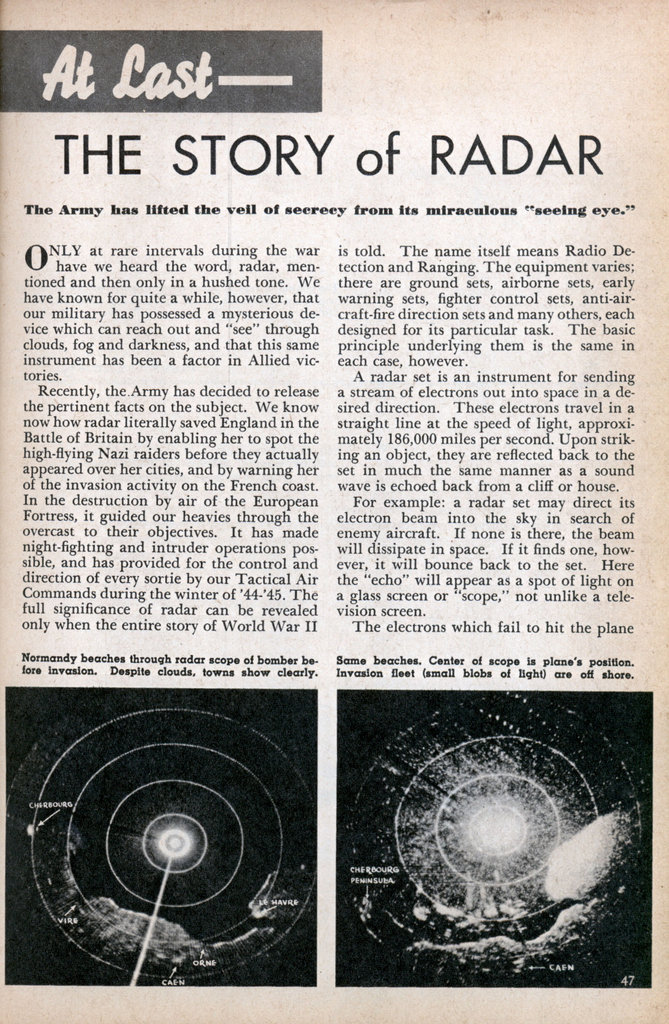 THE STORY of RADAR

The Army has lifted the veil of secrecy from its miraculous “seeing eye.”

ONLY at rare intervals during the war have we heard the word, radar, mentioned and then only in a hushed tone. We have known for quite a while, however, that our military has possessed a mysterious device which can reach out and “see” through clouds, fog and darkness, and that this same instrument has been a factor in Allied victories.

Recently, the Army has decided to release the pertinent facts on the subject. We know now how radar literally saved England in the Battle of Britain by enabling her to spot the high-flying Nazi raiders before they actually appeared over her cities, and by warning her of the invasion activity on the French coast. In the destruction by air of the European Fortress, it guided our heavies through the overcast to their objectives. It has made night-fighting and intruder operations possible, and has provided for the control and direction of every sortie by our Tactical Air Commands during the winter of ’44-’45. The full significance of radar can be revealed only when the entire story of World War II is told. The name itself means Radio Detection and Ranging. The equipment varies; there are ground sets, airborne sets, early warning sets, fighter control sets, anti-aircraft-fire direction sets and many others, each designed for its particular task. The basic principle underlying them is the same in each case, however.

A radar set is an instrument for sending a stream of electrons out into space in a desired direction. These electrons travel in a straight line at the speed of light, approximately 186,000 miles per second. Upon striking an object, they are reflected back to the set in much the same manner as a sound wave is echoed back from a cliff or house.

For example: a radar set may direct its electron beam into the sky in search of enemy aircraft. If none is there, the beam will dissipate in space. If it finds one, however, it will bounce back to the set. Here the “echo” will appear as a spot of light on a glass screen or “scope,” not unlike a television screen.

The electrons which fail to hit the plane are not reflected back, and as a result the rest of the scope remains dark. In this way, an operator, sitting before a radar set and watching the scope, knows immediately upon observing an echo or “blip” on it, that there is something, presumably an aircraft, somewhere in the sky not far away. If the job of this particular radar set is to warn against the approach of enemy planes, it is easy to see how quickly a night fighter can be sent up into the sky to take care of the intruder.

It is equally easy to understand that such a warning is not much good if the next location and course of the enemy are not known. All radar sets are able to supply this information. In the most advanced models the scopes are circular in shape and the operator reads them just as he would a map. North is at the top, south at the bottom, east to the right, west to the left. The scope has a bright spot in the center, and this spot shows where the radar set itself is located.

It is as if the operator were sitting in the center of the map and looking all around him through the eyes of the radar. If he sees a blip near the top of the scope, he knows that there is an aircraft somewhere to the north of him. If it is at the bottom, it is to his south, and so on. The distance the blip is from the center of the scope measures how far away the plane actually is. As the plane moves through the sky, the blip on the screen also moves.

All this can be made more understandable by studying the radar scope photos on these pages. These pictures are from a set carried in a plane and show how the ground looked from that plane. In each case the bright spot in the center of the photo shows the location of the aircraft. As the plane moved (it was heading southeast toward the bottom of the page) the coast of Normandy moved up towards the center of the scope. When the image of the coast had reached the center of the scope, the operator knew that the plane was then over the land and could drop its bombs without any fear of hitting the invasion craft waiting just off shore.

This latter use of radar is made possible by the fact that different substances cause stronger or weaker echoes to appear on the radar scope. Water, for example, normally causes no echo, and the contrast between it and the shore always can be determined exactly. In fact, shore lines stand out so clearly that it is usually possible to recognize certain shapes such as islands and peninsulas, and to navigate from this information.

On land, different structures give different echoes. Built-up areas, particularly those with large, smooth surfaces such as factories, give better echoes than fields; this makes it possible to locate the towns seen in the first of our photos.

Postwar applications of radar in blind flying through clouds and at night will be a decided boon to pilots, and will make our flying safer than ever before.