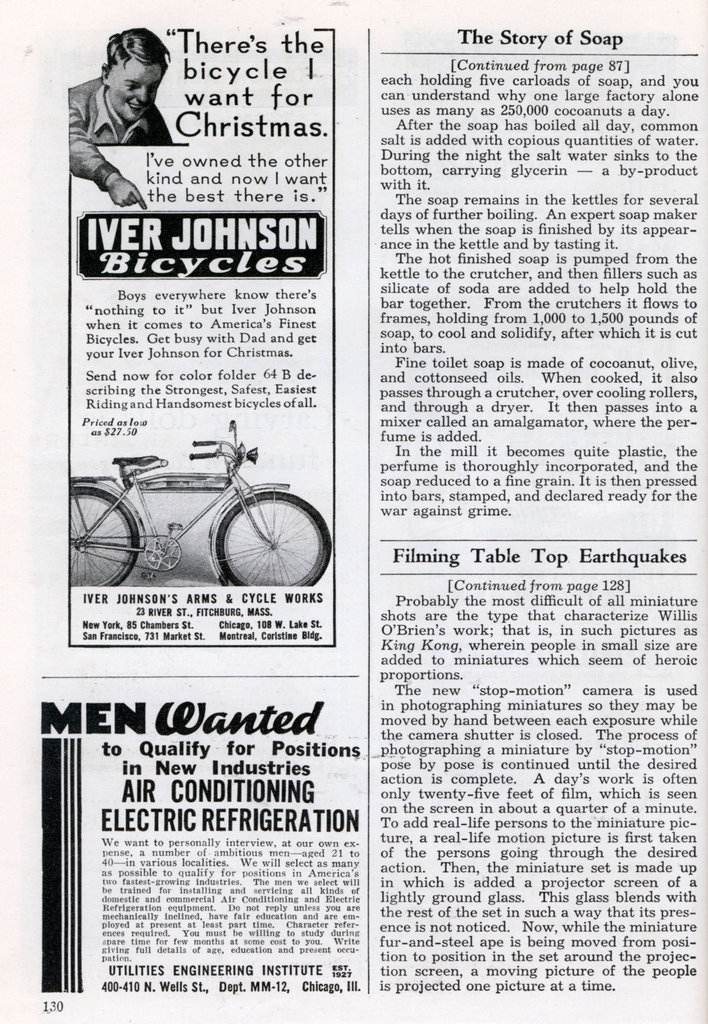 What is soap? Stated simply, ordinary soap is the result of chemical combinations of fats with soda or potash. Much more than this, though, enters into the modern manufacture of soap.

Cocoanut is one of the chief ingredients used. The copra, or dried cocoanut meat, upon arriving from the South Sea island, goes to crushers where it is ground, reducing it to a bran-like substance. Then it is ready for the oil extractors, where the oil, nearly two-thirds of the entire bulk, is pressed out.

From storage tanks the oil is pumped to the refinery, where it becomes a pure, sweet salad-type oil, some of which is sold to manufacturers of vegetable foods.

The oil is next pumped to soap kettles where it is saponified by adding a solution of sodium hydroxide, and boiled with live steam entering the kettles through pipes. Imagine twenty or thirty such kettles three stories high each holding five carloads of soap, and you can understand why one large factory alone uses as many as 250,000 cocoanuts a day.

After the soap has boiled all day, common salt is added with copious quantities of water. During the night the salt water sinks to the bottom, carrying glycerin â€” a by-product with it.

The soap remains in the kettles for several days of further boiling. An expert soap maker tells when the soap is finished by its appearance in the kettle and by tasting it.

The hot finished soap is pumped from the kettle to the crutcher, and then fillers such as silicate of soda are added to help hold the bar together. From the crutchers it flows to frames, holding from 1,000 to 1,500 pounds of soap, to cool and solidify, after which it is cut into bars.

Fine toilet soap is made of cocoanut, olive, and cottonseed oils. When cooked, it also passes through a crutcher, over cooling rollers, and through a dryer. It then passes into a mixer called an amalgamator, where the perfume is added.

In the mill it becomes quite plastic, the perfume is thoroughly incorporated, and the soap reduced to a fine grain. It is then pressed into bars, stamped, and declared ready for the war against grime.