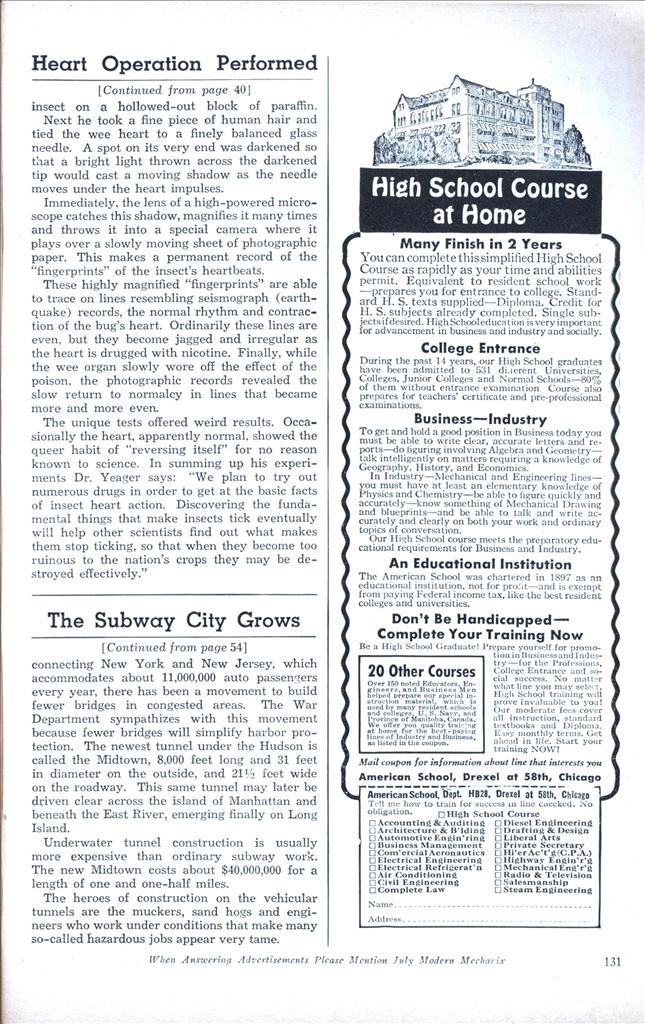 Fancy running New York or London without subway traffic. It can’t be done! So long as huge cities flourish, so long as we have street congestion, underground travel is the easiest solution to our problem. Experience proves it.

The world’s greatest cities keep pace with the growth of population and street traffic by constantly extending the routes of underground transit. Subway building began as a twentieth-century industry, and it seems destined to go on forever. Before one project is finished, another is under way. The process goes on and on, because people are insisting on motion without waste of time or effort. And speed is not a luxury any more.

The population spreading over the wide expanse of New York uses the most elaborate network of underground transit ever built. The city is distributed over something like 5,333 miles of streets, and about 848 miles of subway track are required to serve these thoroughfares with speedy subway transit.

The newest link in a $1,000,000,000 subway system is a two and one-quarter-mile stretch under one of the city’s busiest thoroughfares —Sixth Avenue. The cost is $57,000,000, more than $25,000,000 per mile for a quadruple-lane subterranean highway, surely one of the most costly bits of rail construction on record.

Merely a brief examination of what engineers must contend with will give one an appreciation of why it takes so much money and five long years to build so short a subway section.

In the first place, the overhead street traffic must go on day and night as if there were no construction below. Heavy busses, trucks and other surface vehicles travel the roadway constantly. Also, the same street supports the pillars of an elevated train structure on which passenger trains are always running.

For twenty-four blocks of the distance, the new subway route runs above the tunnels of a high-speed interurban train. Under one street intersection, it must leap over the Pennsylvania Railroad tunnels, dive under another subway and a tunnel, and support the elevated structure over the street.

To all this difficulty is added the presence of a seventeen-foot aqueduct from the Cats-kill Mountains, carrying a stream of clear water for the city’s daily use. Gas mains, steam pipes, electric conduits, sewers, cables, sub-basements, and underground freshets add to the difficulties. Skyscrapers must be pinned up, foundations carried down, cables separated, excavations removed, and concrete poured. Steel beams are pushed through narrow openings. Air drills attack the hard granite and drive holes for dynamite.

Then there is the underground blasting, most ticklish job of all. Every blast is “in the lap of the Gods.” If it fails to go off according to plans, something gives way and perhaps the whole structure may tumble down. Careful calculations and the most painstaking labor enter into subway construction. Hundreds of • thousands walk on the rough planks covering the streets, but few know what actually goes on below. Underwater tunnel construction is another industry that bids fair to develop into permanency. The East River takes the world’s record with ten double-track underwater tunnels. Five immense bridges span this same channel.

Ever since the completion of the Holland Tunnel connecting New York and New Jersey, which accommodates about 11,000,000 auto passengers every year, there has been a movement to build fewer bridges in congested areas. The War Department sympathizes with this movement because fewer bridges will simplify harbor protection. The newest tunnel under the Hudson is called the Midtown, 8,000 feet long and 31 feet in diameter on the outside, and 21-1/2 feet wide on the roadway. This same tunnel may later be driven clear across the island of Manhattan and beneath the East River, emerging finally on Long Island.

Underwater tunnel construction is usually more expensive than ordinary subway work. The new Midtown costs about $40,000,000 for a length of one and one-half miles.

The heroes of construction on the vehicular tunnels are the muckers, sand hogs and engineers who work under conditions that make many so-called hazardous jobs appear very tame.