Next time you sit down in front of Pro-Tools to create your mash-up masterpiece, just remember: Real recording engineers use a blow torch, none of this namby-pamby software crap! 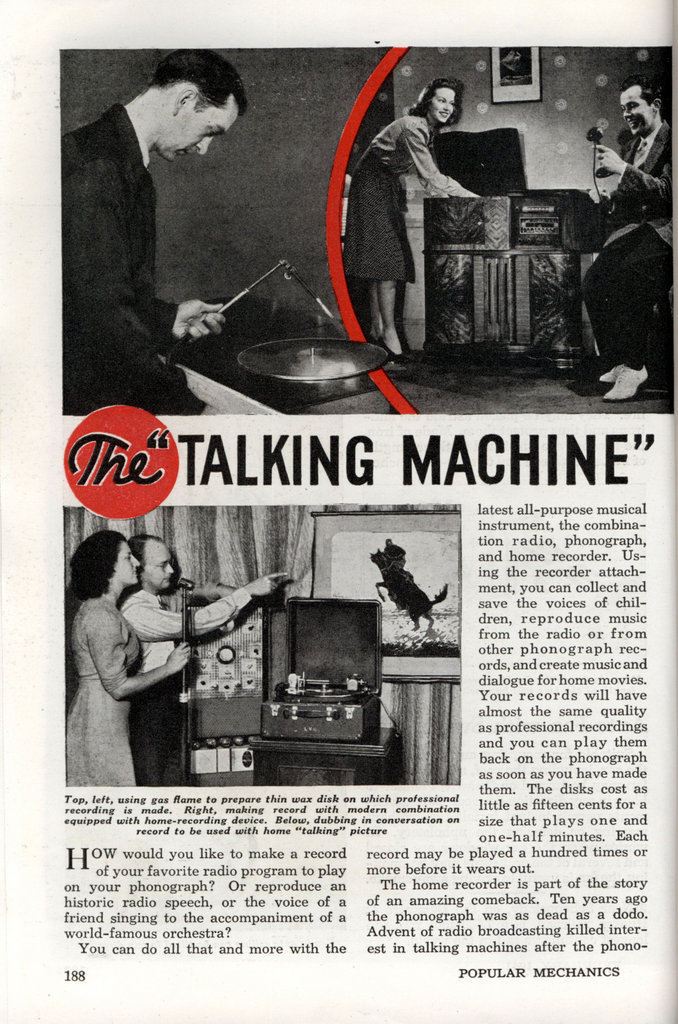 The “TALKING MACHINE” Comes Back

HOW would you like to make a record of your favorite radio program to play on your phonograph? Or reproduce an historic radio speech, or the voice of a friend singing to the accompaniment of a world-famous orchestra?

You can do all that and more with the latest all-purpose musical instrument, the combination radio, phonograph, and home recorder. Using the recorder attachment, you can collect and save the voices of children, reproduce music from the radio or from other phonograph records, and create music and dialogue for home movies. Your records will have almost the same quality as professional recordings and you can play them back on the phonograph as soon as you have made them. The disks cost as little as fifteen cents for a size that plays one and one-half minutes. Each record may be played a hundred times or more before it wears out.

The home recorder is part of the story of an amazing comeback. Ten years ago the phonograph was as dead as a dodo. Advent of radio broadcasting killed interest in talking machines after the phonograph had enjoyed years of popularity. Nevertheless, nearly as many phonograph records were sold last year as in any year before. America spent $36,000,000 for phonograph combinations and records in 1939. In a few years time the phonograph has become as popular as ever, again due to the influence of radio.

Today’s instrument bears little resemblance to the machine that the radio drove out of existence. You wound up the spring motor of the old-style phonograph by hand, placed a heavy mechanical head on the record, and listened to tinny music of poor quality and range.

Even the early radio receivers gave better music than this and the public stopped using its phonographs. Then the pendulum began swinging the other way. Listening to classical music on the radio produced a desire to listen to operas and symphonies at will, without the delays and advertising plugs that are a part of radio broadcasting. At the same time the radio itself was being improved vastly and when the phonograph was ready for re-introduction it adopted many of the improvements that had been made to radio. The motion picture likewise played a part in perfecting the new phonograph because many of the advances in sound recording and reproduction that have improved the talkies were adopted.

Such improvements made possible the “juke box” record players that are installed in restaurants and other places and these coin-operated phonographs also helped restore the talking machine’s popularity. The latest thing in automatic music is to “pipe” the music over wires from a central exchange when a customer deposits a coin in the speaker box and uses its microphone to tell the central operator the selection he wishes played.

Today’s phonograph is all-electric. A motor drives the turntable at a constant rate of speed, being “hitched” to the cycles of the house current like an electric clock. The light crystal pick-up head weighs only a few ounces instead of up to a pound and one manufacturer is using an electric eye type of pick-up that is lighter still. The vibrations from the pick-up arm are amplified in an audio amplifying circuit that employs vacuum tubes and the music is produced in a radio-type dynamic speaker. The result is an instrument of great musical clarity and range with complete control of tone and volume. For the first time the phonograph gives a close approximation of the actual sounds that were recorded. The first combination radio and electric phonograph appeared on the market about twelve years ago and sold for several hundred dollars. The same combination, vastly improved, is now available for less than $100. Prices begin at a few dollars for an electric record player that uses the audio circuit and speaker of your present radio. Next come the portable and table model phonographs that have no radio attached but are equipped with vacuum-tube circuits and radio-type speakers. Next on the list is the combination radio and phonograph that costs as little as thirty dollars and that is made in a wide range of models from portables to the full console cabinet instruments.

The radio side of the combination is ordinarily equipped with built-in antennas for short-wave and overseas reception, and in many models the phonograph has an automatic record changer that places a new record on the turntable and plays it as soon as the last record has finished. Half an hour or more of music may be enjoyed without touching the instrument and on some models the automatic changer can handle records of mixed sizes. On still others the changer, in addition to replacing one record with another, turns over each record so that both sides may be played, giving a continuous program of about three hours.

This year many manufacturers have rounded out this combination by adding a home recorder to the radio phonograph. As a recording device it preserves on a record the sounds that its microphone picks up. Some people are making a history of the present war by preserving on disks all the important war speeches delivered on the air. Others record the radio voices of their favorite film stars as well as making complete records of programs that they like. Classical selections played by famous ochestras on the radio are also copied.

Using the recorder microphone, a singer can mix his voice with the music coming in over the air. The home recorder is used by schools for teaching diction and by music teachers for both vocal and instrumental instruction. Business men dictate letters with it and it is used by the police for recording confessions. Conversations between pilots and their ground stations are preserved on records. It makes a handy way of preparing musical and conversational accompaniments for home movies. Turn a switch and it may be used as a public-address system for speeches or for amplifying phonograph music.

The cheapest record blanks are made of cardboard, faced on each side with an acetate or nitrate sheet. Aluminum disks are preferred by some and blanks of ordinary black record composition are also on the market. A design of dots and squares printed on some records gives the stroboscope effect of standing still at one speed or the other so that the operator can regulate his turntable speed accordingly.

Commercially made professional records are still made by Edison’s method of recording on wax. The original wax then goes through several dozen treatments before the pressed reproductions are turned out. Some of the earliest wax records, made forty years ago and of great historical and artistic importance, that have been stored away ever since, are now being replayed without injury. Modern reproduction equipment makes it possible to reproduce the voices and music almost exactly the way they sounded when uttered nearly half a century ago, not the way they sounded in the old tin horn phonographs of a decade or more ago.