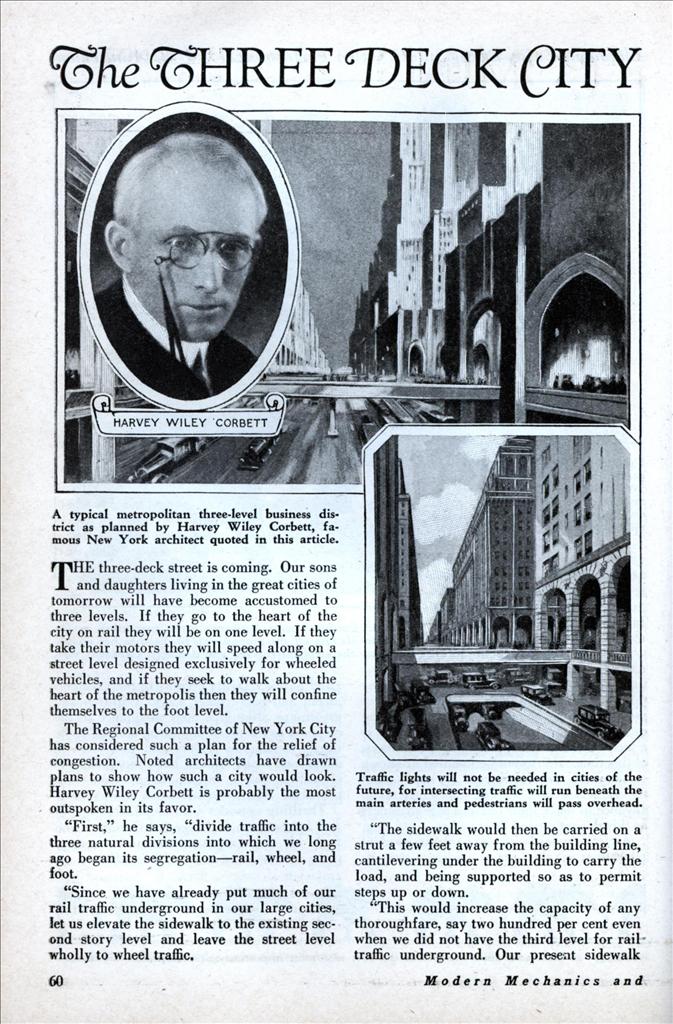 The THREE DECK CITY is COMING

THE three-deck street is coming. Our sons and daughters living in the great cities of tomorrow will have become accustomed to three levels. If they go to the heart of the city on rail they will be on one level. If they take their motors they will speed along on a street level designed exclusively for wheeled vehicles, and if they seek to walk about the heart of the metropolis then they will confine themselves to the foot level.

The Regional Committee of New York City has considered such a plan for the relief of congestion. Noted architects have drawn plans to show how such a city would look. Harvey Wiley Corbett is probably the most outspoken in its favor.

“First,” he says, “divide traffic into the three natural divisions into which we long ago began its segregation—rail, wheel, and foot.

“Since we have already put much of our rail traffic underground in our large cities, let us elevate the sidewalk to the existing second story level and leave the street level wholly to wheel traffic.

“The sidewalk would then be carried on a strut a few feet away from the building line, cantilevering under the building to carry the load, and being supported so as to permit steps up or down.

“This would increase the capacity of any thoroughfare, say two hundred per cent even when we did not have the third level for rail -traffic underground. Our present sidewalk system is archaic. It originated in a day when none could have foretold the throngs which now stop at street intersections to wait the passing of automobiles or dodge their way through and between them.

“Under this arrangement streets would be bridged at the sidewalk level and foot traffic never become mixed with wheel traffic. Shops and stores and entrances to buildings would be placed at the level of the elevated sidewalk. This leaves wheel traffic where it already is, on the surface of the earth. Thus its level doesn’t have to be dug out or built up.”

The triple deck street, architects say, has the obvious advantage of elasticity. The plan can be tried out with small units at a time and at a minimum of expense. There is no need of cutting new streets and the great expense of burrowing and excavating is eliminated.

“The greatest advantage in the three level street,” Mr. Corbett says, “lies in its ability to permit the uninterrupted development of each kind of street traffic.”

Health authorities point out that light and air would be better on the elevated sidewalk level. There wouldn’t be so much carbon : monoxide. Retail concerns would attract shoppers who wouldn’t fear traffic dangers.