Sexology
Issue: Dec, 1961
Posted in: General, Sexuality
10 Comments on THE TRAGEDY OF THE EXHIBITIONIST (Dec, 1961)

THE TRAGEDY OF THE EXHIBITIONIST (Dec, 1961) 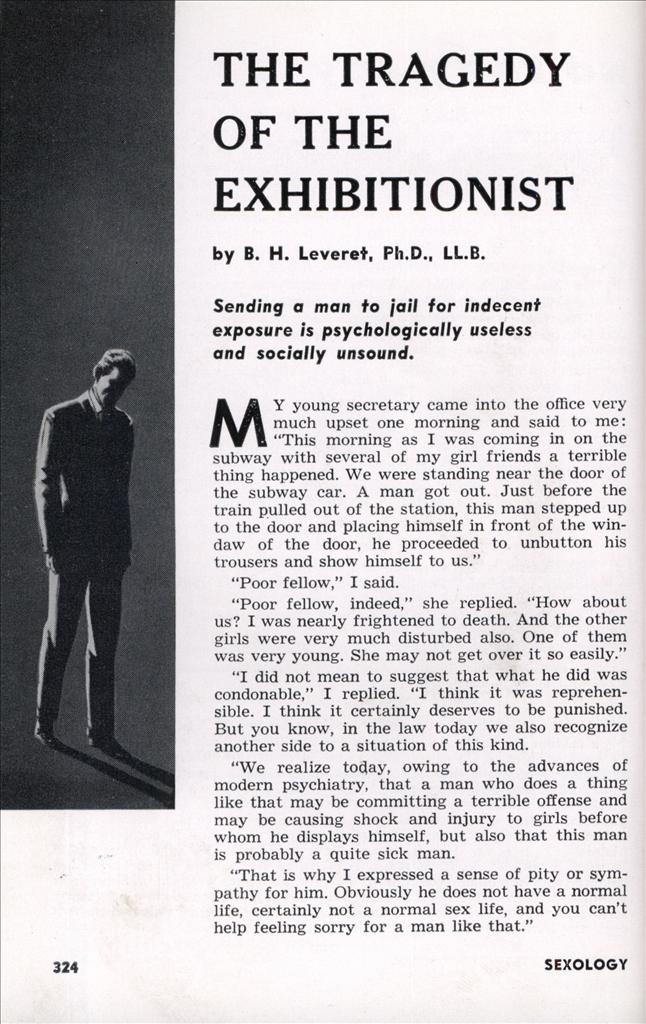 THE TRAGEDY OF THE EXHIBITIONIST

Sending a man to jail for indecent exposure is psychologically useless and socially unsound.

MY young secretary came into the office very much upset one morning and said to me: “This morning as I was coming in on the subway with several of my girl friends a terrible thing happened. We were standing near the door of the subway car. A man got out. Just before the train pulled out of the station, this man stepped up to the door and placing himself in front of the win-daw of the door, he proceeded to unbutton his trousers and show himself to us.”

“Poor fellow, indeed,” she replied. “How about us? I was nearly frightened to death. And the other girls were very much disturbed also. One of them was very young. She may not get over it so easily.”

“I did not mean to suggest that what he did was condonable,” I replied. “I think it was reprehensible. I think it certainly deserves to be punished. But you know, in the law today we also recognize another side to a situation of this kind.

“We realize today, owing to the advances of modern psychiatry, that a man who does a thing like that may be committing a terrible offense and may be causing shock and injury to girls before whom he displays himself, but also that this man is probably a quite sick man.

“That is why I expressed a sense of pity or sympathy for him. Obviously he does not have a normal life, certainly not a normal sex life, and you can’t help feeling sorry for a man like that.”

This conversation which I had with my secretary will serve to bring out the two themes which I wish to explore in this article.

The first theme is the way in which the law seeks to prohibit exhibitionists from performing their antics. It is obvious that an exhibitionist can receive sexual pleasure from his acts only if he performs them in public. He cannot receive the pleasure which he craves unless he exhibits himself before women. Part of his pleasure is in their reaction.

Thus, it is evident that the antics of exhibitionists are a matter of public concern and a proper subject for the criminal law to deal with. We must try to prevent, prohibit and deal with apprehended exhibitionists in an effective way.

On the other hand there is a second theme. That theme is the way in which we should deal with such offenders after they are apprehended.

The point is that under our contemporary ideas of criminology we try to do what we can with unfortunate men like the exhibitionists to help them to overcome the drives which lead them into trouble. In that way we can restore them to society as useful members of the community.

Otherwise they are lost to society and it may be that they are lost only because we have not taken the trouble to give them the kind of psychiatric or other medical help which could retrieve them.

While a great many things that people do by way of expression of their sexual feelings are entirely up to them, the public, through the law, does come in to say to people that when they act in public they cannot act in such a way as to shock the public sense of decency. Thus there are many statutes in many states which prohibit lewd or lascivious behavior in public.

The New York penal law, for example, reads briefly as follows: “A person who willfully and lewdly exposes his person or the private parts thereof, in any public place, or in any place where others are present . . . is guilty of a misdemeanor.”

This section of the New York penal law deals with one specific type of lewd behavior in public. It deals with indecent exposure and exhibitionists. It is the kind of statute which covers the kind of behavior this article is about.

The term “exhibitionism,” by the way, is the term which psychiatrists use and it corresponds to the term which the lawyers use to say the same thingâ€”namely, “indecent exposure.”

Ordinarily a statute of this kind is broad enough to cover not only the lewd exposure of oneself in a public or open place but also any such exposure in any place where others may be present.

In the first group, for example, there is a case of an elderly man who exposed himself to some young girls in the woods. There is another case of a peddler who exposed himself at the door of a house when two young children came to the door. In both of these cases, these exhibitionists were held to have violated the statute.

In the second group there is a case of a man who exposed himself on the roof of a house where others could see him. There are cases where men have been arrested for exposing themselves from their own apartment window in such a way that women could see them across the court. Wherever such exposure is intentional, there can be a conviction under such a statute. Of course, if the exposure is accidental, it is not a crime and there would be no violation of the statute.

You will note that the statute speaks of exposure for a lewd purpose. The reason for this qualification is that sometimes we quite conventionally expose our persons without any lewd purpose behind the exposure.

For example, persons in a nudist camp might swim together. Such an exposure would not be held to be a lewd exposure in most states, though it might be in some states. In New York, as it happens, the law has been specifically amended to prohibit the practice of nudism.

The characteristic way in which the exhibitionist tends to function is illustrated in the very story which my secretary told me. He usually takes a quite public place for his exposure. It is a place where girls and women may see him. It may be a female toilet. It may be a girls’ school. It may be, as was the case with my secretary, in a subway station.

Quite often the exhibitionist derives greater satisfaction when he exposes himself to a larger number of women or girls. Apparently part of his satisfaction derives from the shock which it gives to his victim or many victims.

In every large city there are many persons walking around who have this urge to exhibit their persons and their private parts publicly. Thus there are many arrests for this offense. In New York, for example, in a period of twenty years which was studied, there were some 200 to 500 arrests during each of the four year periods which were analyzed.

The offense of indecent exposure is almost exclusively an offense which is practiced by men. The usual excuse which the man gives when he is caught is that he is looking for a place to relieve himself and that no toilet was available. Naturally he does not get very far in this defense in most cases.

While it is true that the exhibitionist is not usually a dangerous or violent person and does not ordinarily try to attack or even touch the women who may be called his sight-seeing victims, he is nevertheless definitely a serious nuisance. Undoubtedly, he can shock and upset those whom he encounters, as in the case of my secretary, and he may indeed scare or frighten them in a grave manner, sometimes creating a trauma or a twisted reaction in the persons who have been grossly startled.

Quite often too we find that the exhibitionist is in other respects a quite normal and even a well-adjusted person. He is apparently the victim of severe compulsion, what the psychiatrists call a “compulsive neurosis.” He understands what he is doing usually, despite the fact that he is unable to control his acts.

Several years ago I had occasion to serve on a committee with a group of other lawyers and legal authorities to inquire into possible changes of the law relating to emotionally or mentally disturbed or insane persons. This committee had the opportunity to interview a number of distinguished psychiatrists, who gave us the benefit of their experience and opinions.

I recall one psychiatrist very vividly because of his dramatic narration of the case history of an exhibitionist he was treating, who would come to him periodically to try to ferret out the impulses in his nature which seemed to compel, him to exhibit himself.

This man would stand behind a tree in the park and then come out when young girls were passing by. As the treatment progressed over a period of months, the psychiatrist reported to us that it was possible for his patient to hesitate for much longer intervals of time behind the tree before finally making the break out. He would debate with himself. He would say, “No I won’t.” And then the impulse would reappear. He would continue to fight the impulse. Finally he would give way to the impulse but the intervals were taking longer and longer.

This psychiatrist was unable to tell us whether he thought that he could cure this man; but he was one of the psychiatrists who took the position before us that there is such a thing as a real compulsion of which the law ought to take cognizance and which negates the deliberate intention which the law attaches to crimes.

Not being a psychiatrist, I am unable to pass a judgment on these views except to point out also that sometimes exhibitionism may be the result of drunkenness or epilepsy or senility or a weak mind generally.

In a recent book on the subject entitled Exhibitionism, the author, Dr. N. K. Rickles, has a theory of his own to explain what he regards as the compulsive neurosis to expose oneself. He believes that it stems from overprotection by the mother and overdependence on the part of the son. Whatever may be the cause of the aberration, it remains a problem with which lawyers and the criminal law and society at large must deal.

Thus, in conclusion, I would revert back to the two themes which I announced at the beginning of the article. Exhibitionists are committing an offense which is a violation of the law and for which they must be arrested and, if they are guilty, convicted. At the same time it is also true that sending such a man to jail and having him come out and repeat the offense is a wasteful if not silly social procedure.

Accordingly it seems to me that, more and more, society should devote constructive attention to the establishment of institutions and the creation of procedures which will aid such unfortunate persons to remove the basic mental or emotional conflicts which cause them to depart from normal channels of sexual behavior and thus deprives both them and society of more constructive and healthy-minded activity.