The Truth About “Experimental Animals” (Feb, 1949)

I love this little diatribe against animal rights activists because it shows how little has changed in the last 50 odd years. If this guy is still alive I’ll bet he’s working for Fox News. He uses the exact same techniques they do. People who don’t strongly support vivisection “hate humans”, much like liberals “hate America”. He sets up straw men and creates fictional arguments to knock down, for example stating that anti-vivisectionists are against counting a cat’s heartbeats. Really? Because his title for them seems to imply that their primary objection is to cutting open and dissecting live animals.

The other truly modern part of this letter comes in the first to last paragraph. There the author explains that if you speak out against the animal-rights movement you will be tortured just like those people in the Nazi death camps. It looks like Godwin’s Law was alive and well long before the Internet. This article was written just 4 years after the holocaust and already liberals are Nazis. 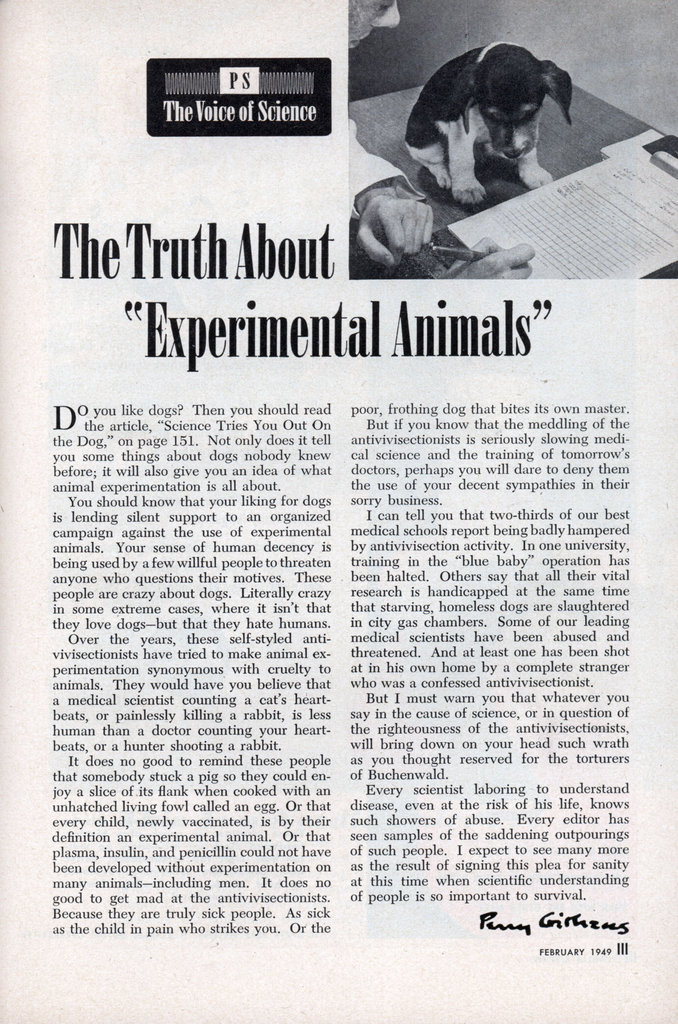 The Truth About “Experimental Animals”

DO you like dogs? Then you should read the article, “Science Tries You Out On the Dog,” on page 151. Not only does it tell you some things about dogs nobody knew before; it will also give you an idea of what animal experimentation is all about.

You should know that your liking for dogs is lending silent support to an organized campaign against the use of experimental animals. Your sense of human decency is being used by a few willful people to threaten anyone who questions their motives. These people are crazy about dogs. Literally crazy in some extreme cases, where it isn’t that they love dogsâ€”but that they hate humans.

Over the years, these self-styled anti-vivisectionists have tried to make animal experimentation synonymous with cruelty to animals. They would have you believe that a medical scientist counting a cat’s heartbeats, or painlessly killing a rabbit, is less human than a doctor counting your heartbeats, or a hunter shooting a rabbit.

It does no good to remind these people that somebody stuck a pig so they could enjoy a slice of its flank when cooked with an unhatched living fowl called an egg. Or that every child, newly vaccinated, is by their definition an experimental animal. Or that plasma, insulin, and penicillin could not have been developed without experimentation on many animalsâ€”including men. It does no good to get mad at the antivivisectionists. Because they are truly sick people. As sick as the child in pain who strikes you. Or the poor, frothing dog that bites its own master.

But if you know that the meddling of the antivivisectionists is seriously slowing medical science and the training of tomorrow’s doctors, perhaps you will dare to deny them the use of your decent sympathies in their sorry business.

I can tell you that two-thirds of our best medical schools report being badly hampered by antivivisection activity. In one university, training in the “blue baby” operation has been halted. Others say that all their vital research is handicapped at the same time that starving, homeless dogs are slaughtered in city gas chambers. Some of our leading medical scientists have been abused and threatened. And at least one has been shot at in his own home by a complete stranger who was a confessed antivivisectionist.

But I must warn you that whatever you say in the cause of science, or in question of the righteousness of the antivivisectionists, will bring down on your head such wrath as you thought reserved for the torturers of Buchenwald.

Every scientist laboring to understand disease, even at the risk of his life, knows such showers of abuse. Every editor has seen samples of the saddening outpourings of such people. I expect to see many more as the result of signing this plea for sanity at this time when scientific understanding of people is so important to survival.