Mechanix Illustrated
Issue: Sep, 1953
Posted in: General
Tags: nuclear
4 Comments on The Truth About… Our Weather and the A-Bomb (Sep, 1953) 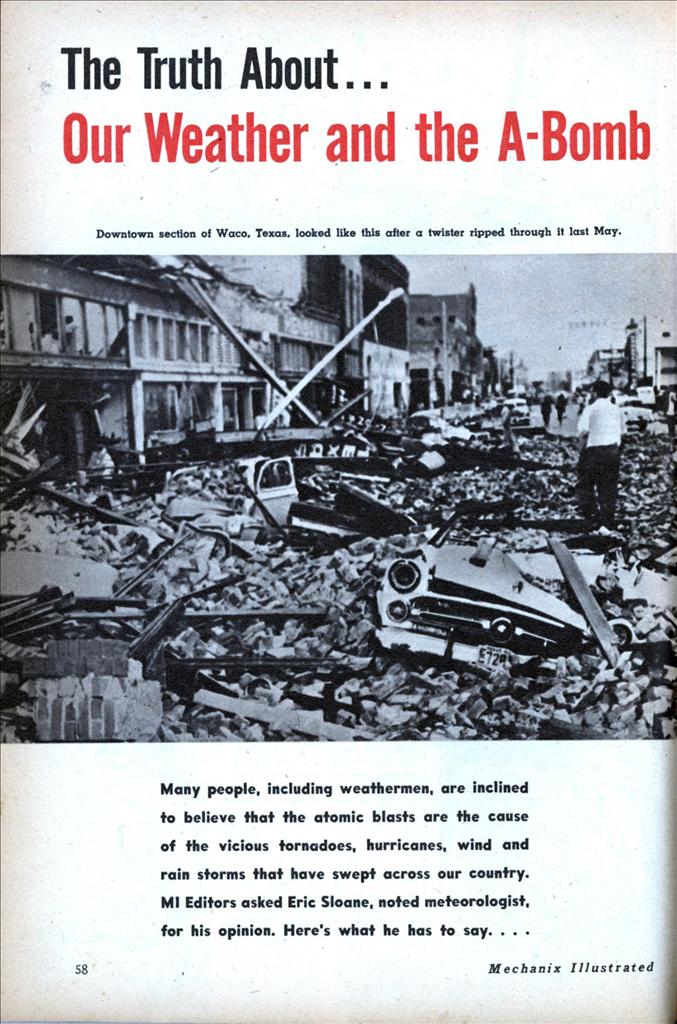 The Truth About… Our Weather and the A-Bomb

Many people, including weathermen, are inclined to believe that the atomic blasts are the cause of the vicious tornadoes, hurricanes, wind and rain storms that have swept across our country. MI Editors asked Eric Sloane, noted meteorologist, for his opinion. Here’s what he has to say.

THERE’S little doubt about our changing climate. The fierce winters of yesterday are disappearing, tornadoes and hurricanes are becoming more vicious and weather trends aren’t trends” any more. They can’t be depended upon. Just about anything can happen—and does.

If you are one of the many who wonder if the A-bomb is responsible for our queer weather, you can forget it. It isn’t so. What is the answer? It’s simply that we are riding on the tail end of a glacial age and our climate is shifting.

Realize that not too long ago, before electric refrigeration, most of our large cities depended upon ice for their iceboxes. We don’t miss the ice today because we have refrigerators, but we would if we had to depend upon those very same lakes. They just don’t ice-over any more. Present-day New Yorkers who have never seen the Hudson River covered with ice find it hard to believe that once there was a regular ferry service over the ice to Staten Island. Many a five-year-old in “wintery” New England has yet to use a sled or throw a real snowball.

Our winters are milder and we are apt to overlook a comfortably warm winter season. But let there be a “day of the great blizzard” and everybody will remember it. Unpleasant weather leaves the greatest impression. Let winds and floods and storms increase and we immediately ask for a Congressional investigation to probe the possible effects of atomic radiation on weather.

If you are still upset, however, and feel you must worry about the distant future of mankind, forget the weather effects of atomic bombs and wonder what would happen if the ice reservoirs of Greenland and all the polar regions let go in one fast melting spree. The level of our oceans would rise about 200 feet. All our coastal cities would be wiped out and civilization would have to retreat to the highlands. As a matter of fact the polar icecaps are already receding at the rate of some 500 feet a year, causing climatic changes and raising the level of the sea about an inch during the last century. This is a sign of things to come.

The glaciers and ice reservoirs began their retreat about 20,000 years ago and by 5,000 B. C. the weather had become much milder. Green forests spread into the northlands where they exist today. After the twelfth century however, the weather cycle swung low and the climate became more severe. Winters became longer and the glaciers reached their maximum during this “Little Ice Age” from 1650 to 1850.

Since 1850 the glaciers have been retreating under a climate of shorter winters and warmer summers. Despite the fact that our snowiest winter was but five years ago, you may discount that as being no more than a break in the cycle; the trend toward warmer climate persists. Whether it will fluctuate, become stronger or weaker, is all within the fancy of time. Certainly none of us will live to see such drastic changes as the melting of the icecaps.

A tornado has no part in the machinery of climate. Rather it is the accidental loose nut that flies off the machine or the backfire of an otherwise normal storm cycle. A tornado is like a whirlpool where two tides meet. You can get the effect of one by rolling a pencil between your two palms. Each hand represents a different air mass; the pencil which turns rapidly but moves slowly up or down each hand acts just like the long funnel of a twisting tornado. Try it and see.

When a warm moist air mass meets a cold front head-on, the motion of the two different kinds of air (like the two hands), causes friction and extreme low pressures. Once a low pressure area funnels into a definite pattern, it will spiral earthward as a tornado “cloud” or funnel. The waterspout is just a tornado over the water and although most people think the waterspout contains water being sucked up from the sea, it is merely a cloud being formed by condensation within whirling air. The sea water sucked upward in a waterspout seldom rises more than two or three feet and when the spout disappears, tons of sea water do not fall back into the sea, but the fresh water forming the cloud just disappears back into the atmosphere again.

The drawing shows in simple form a tornado forming along a cold front. To indicate the air mass which the “front” is the front of, you would need a magazine page 100-feet wide. The frontal storm machinery is huge, many times larger than the storm itself and much too large an area to be formed by the aftermath of an atomic explosion.

Usually, about two days after a bomb blast in Nevada, radioactive particles fall on the east coast. This fact, along with unusual weather, is what has startled many people including meteorologists into wondering about the effect of atomic blasts on our weather. Weathermen know that rain cannot occur in absolutely clear air—that tiny particles are necessary as nuclei for the raindrops to form around. It is true that a great blast does push dust into the substratosphere where there are express air jets of global wind to carry it elsewhere. On April 6, 1953 an A-blast was set off at Yucca Flats, Nevada. On the following two days a rain cloud bearing irradiated dust covered the east coast. This is not startling, however, for on May 2 New York had a rainfall containing red dust from windstorms in Texas. In other words it is perfectly natural for dust (irradiated or not) to be carried elsewhere and aid in the formation of rain. Even smoke particles might result in being nuclei for rain. So, generally speaking, the clouds of an atomic explosion are not “thunder clouds.”

As the atomic scientists put it, “there is no evidence that the explosion has been followed by anything but a passing local downpour;” In other words, that the particles in the mushroom-shaped cloud acted as dust around which droplets of moisture condensed just as rain makers sow the clouds with crystals of silver dioxide for the same purpose.

Any sustained change or a trend in weather is so large an affair that a local disturbance, even atomic-bomb size, seems ridiculously small. It is like expecting a spoonful of hot water to noticeably change the temperature of a tub full of cold water. A frontal storm which usually brings our rain may be likened to the foam at the prow of a great ship. Like the vessel behind the bow-wave, the warmer (or colder) air mass behind the storm is many thousands of times bigger than the storm itself. For example, our severe summer thunderstorms are about ten miles wide but the cold air mass that causes the commotion may be a great blob of cooler air 500 miles in diameter.

As for our climate becoming warmer, even the heat generated by our large cities plus the many thousands of square miles of denuded forests that have been replaced with heat absorbing concrete might definitely change the average temperature of the country more than the heat generated from any A-bomb.

Although man can nick off a degree or two here and there or coax rain out of a cranky rain-cloud, nature is still the boss of the atmosphere.