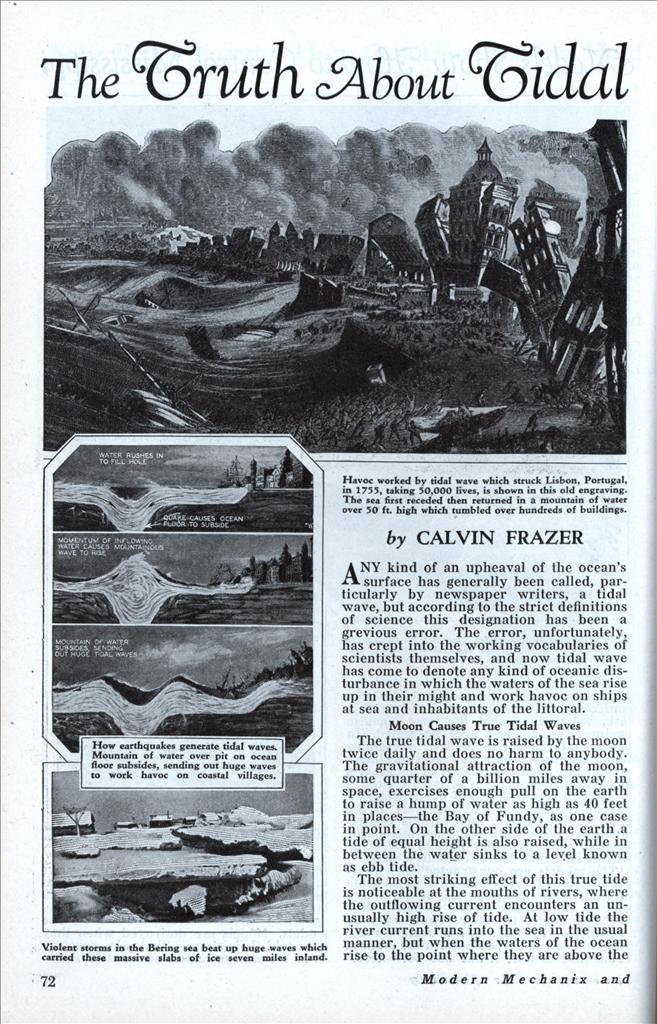 The Truth about Tidal Waves

Paradoxical as it may sound, tidal waves have caused some of the most terrible disasters in history, yet they occur twice daily without serious results. Here is an explanation of these oceanic upheavals.

ANY kind of an upheaval of the ocean’s surface has generally been called, particularly by newspaper writers, a tidal wave, but according to the strict definitions of science this designation has been a grevious error. The error, unfortunately, has crept into the working vocabularies of scientists themselves, and now tidal wave has come to denote any kind of oceanic disturbance in which the waters of the sea rise up in their might and work havoc on ships at sea and inhabitants of the littoral.

The true tidal wave is raised by the moon twice daily and does no harm to anybody. The gravitational attraction of the moon, some quarter of a billion miles away in space, exercises enough pull on the earth to raise a hump of water as high as 40 feet in places—the Bay of Fundy, as one case in point. On the other side of the earth a tide of equal height is also raised, while in between the water sinks to a level known as ebb tide.

The most striking effect of this true tide is noticeable at the mouths of rivers, where the outflowing current encounters an unusually high rise of tide. At low tide the river current runs into the sea in the usual manner, but when the waters of the ocean rise to the point where they are above the level of the river a strange sight is to be seen. A tumbling cataract of water creeps slowly upstream in a manner unaccountable to a spectator unfamiliar with the operations of tides. This cataract is called a bore, and it is caused by the high level water from the ocean flowing over the river waters moving outward, as illustrated in an accompanying photo. The cataract is three feet high and moving as fast as a man can run.

The tidal waves which inflict heavy losses of life and property on maritime regions generally have their origin in two sources. Tropical hurricanes, famous for their destructive fury, drive up huge storm tides that frequently descend upon a town or village along the seacoast and wipe out hundreds of thousands of dollars worth of property, and drown unwary hundreds of people at one fell stroke.

The terrific winds, rising at times to a velocity of a hundred miles an hour, beat up waves that attain heights of fifty and sixty feet. When these moving mountains of water strike a low-lying coastal village there is little that can be done by way of protection. As a rule these huge waves are followed by a series of smaller waves which tear up what is left of the devastated areas.

Sometimes these tidal waves travel far out of the hurricane area into regions undisturbed by the storm. On one occasion a tidal wave originating in the Caribbean, struck a Central American port and, finding the shipping totally unprepared, piled a number of ships up high and dry on the beach. Among them was the U. S. S. Memphis, a cruiser on duty in tropical waters. The Memphis is shown in an accompanying photo.

Florida, the Gulf coast, Central America, and the West Indies are frequently subjected to punishment at the hands of the tidal waves. Fortunately, however, a highly efficient weather bureau, maintained by the U. S. Government, enables shipping to keep informed as to the weather all through the tropics. Storm warnings are broadcast to ships regularly, so that they can make for deep waters when a storm approaches.

How Earthquakes Cause Tidal Waves

Submarine earthquakes occurring far out at sea account for many disturbances of the ocean surface which often pass as tidal waves. When old Mother Earth gives a rumble down in her innards, a section of the sea bottom subsides and a great mass of water comes pouring into the gap to fill up the space. Momentarily there is formed a pit of water immediately over the locale of the subsidence, but the momentum of the inrushing water quickly fills this hole up and in addition piles up a young mountain of water.

Now one of the first laws of nature is that all that goes up must come down, and when this mountain of water comes down it raises huge waves which radiate outward, spreading in concentric rings that run over the sea’s face for hundreds of miles. The procedure has the appearance of that familiar series of rings which are generated when you throw a rock into a pond of still water.

These tidal waves are particularly vicious when they strike a low-lying coastal city. One of the greatest disasters in history occurred when a tidal wave generated by a marine quake struck the city of Lisbon, Portugal, in 1755, almost completely destroying the city and snuffing out 50,000 lives. Having no warning whatever the city was taken unawares, with what terrible results, an accompanying drawing will show.

Immediately after the quake occurred, the waters receded, leaving the mouth of the Tagus river bare. But then a few seconds later a huge wave more than 60 feet in height returned with full fury and swept over the city, tumbling down hundreds of buildings along the waterfront, smashing ships tied up to the wharves, and drowning thousands. When a series of smaller waves had reduced the city to a mass of wreckage, fire broke out and administered a “coup de grace.” Over $100,000,000 in damage was done.

Fortunately, tidal waves of this type can be anticipated and guarded against nowadays, thanks to the invention of a marine seismograph recently devised by an Italian scientist. The vibrations set up by the quake travel at a much higher speed than the tidal wave, so that when the former is detected in the seismograph, the latter can be expected to follow shortly thereafter.

Such an instrument installed in a Hawaiian city recently gave warning of a tidal wave to come. The populace scurried to the hills, from which point they watched giant incoming wave destroy their homes.