Over 50 years later and this technology is still incredibly hard to get to work right, though I think it’s one of those things where fast computers and accurate sensors help a lot. 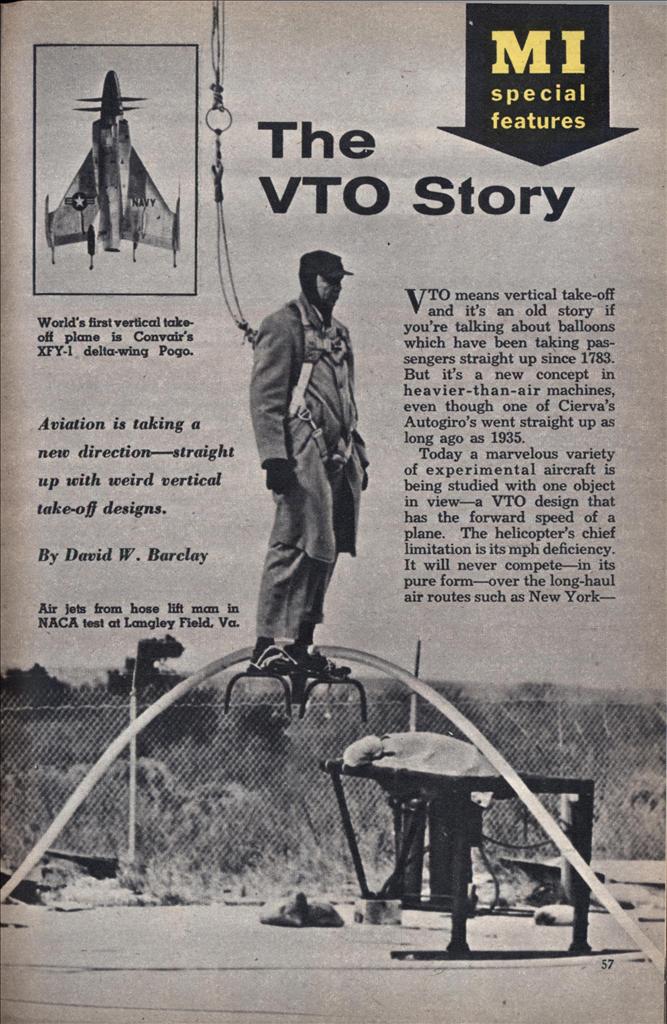 Aviation is taking a new direction—straight up with weird vertical take-off designs.

VTO means vertical take-off and it’s an old story if you’re talking about balloons which have been taking passengers straight up since 1783. But it’s a new concept in heavier-than-air machines, even though one of Cierva’s Autogiro’s went straight up as long ago as 1935.

Today a marvelous variety of experimental aircraft is being studied with one object in view—a VTO design that has the forward speed of a plane. The helicopter’s chief limitation is its mph deficiency. It will never compete—in its pure form—over the long-haul air routes such as New York— Los Angeles. But planes with VTO would take most of the agony out of airport management and operation. Any fairly flat space of any shape and of relatively modest size could be an airport and surrounding buildings or hills would no longer count as approach hazards. Ceiling Zero, Visibility Zero would be standard operational minimums for all airports. For the traveler, life would be rosy—no more weather delays, no more costly and time-consuming city-to-airport transfers—because the airport would be in the center of town. Strategic military airbases could be set up on short notice simply by flying VTO combat and service craft into any cow pasture, ball park or lonely spot along the coast.

The familiar tail-sitting Navy VTO’s employ a helicopter type of rotor for lift that also serves as a nose prop. They can also come down butt first, oh-so-gently. These turboprop-powered VTO’s aren’t hot enough to be part of a carrier’s striking force but they will provide a fine aerial defense for surface ships with limited deck space. When the carriers do go VTO, however, they’ll double their airpower (no more wasting deck space on runways) with planes that never sit helplessly on deck.

The Russians have been in the VTO race the longest; their CZ-2B jet was on the drawing board in 1947 and reliable reports of its performance are in the possession of the RAF. Plans for a VTO fighter were found in the Focke-Wulf plant in Germany at the end of World War II. The Jerry VTO had ram-jet engines on the tips of a rotor mounted waist high on its fuselage.

Current American work on VTO jets is making giant strides. The big problem now is controlling the jet blast; one solution is to direct the blast through controls inside a “Flying Barrel.”

Obviously tail-sitting planes possess small appeal as passenger carriers. The paying public likes to sit natural. For this group the convertiplane will be the answer. One general type of convertiplane tilts its rotors or jets to go from vertical to forward flight; another general type uses deflecting surfaces to turn its blast downward during landing and take-off. Whichever emerges as the most acceptable type, there’s no doubt of the new direction aviation is taking. It’s straight up.