Mechanix Illustrated
Issue: Dec, 1956
Posted in: General
1 Comment on The Weather Can Change Your Life (Dec, 1956) 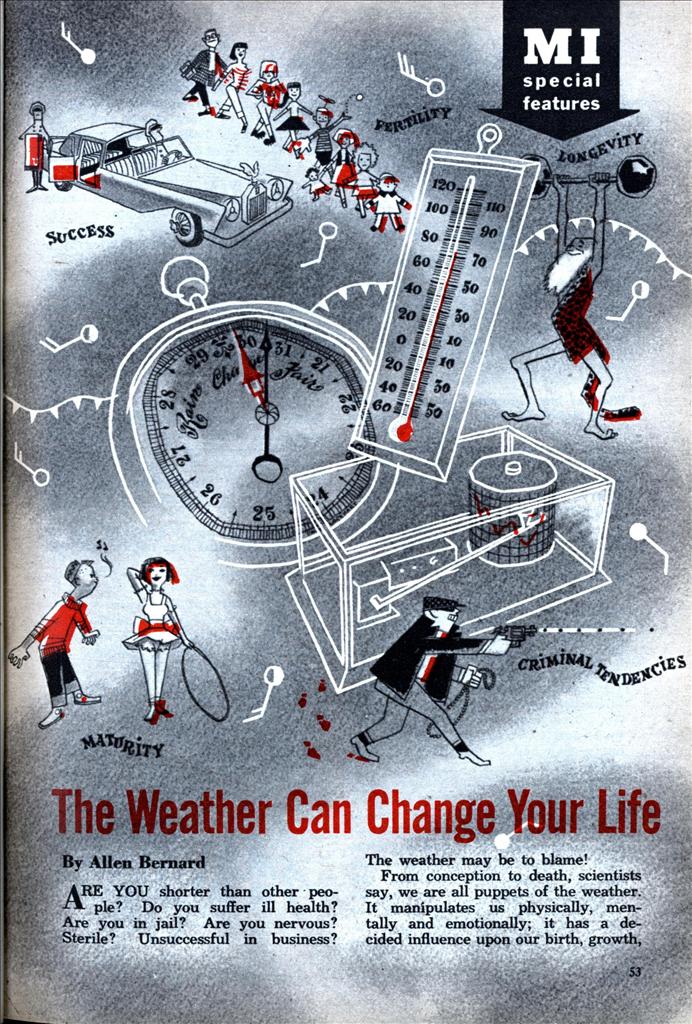 The Weather Can Change Your Life

ARE YOU shorter than other people? Do you suffer ill health? Are you in jail? Are you nervous? Sterile? Unsuccessful in business?

The weather may be to blame!

From conception to death, scientists say, we are all puppets of the weather. It manipulates us physically, mentally and emotionally; it has a decided influence upon our birth, growth, health, life span, work and behavior.

Man lives at the bottom of an immense ocean of air. He breathes from 7,000 to 10,000 quarts of it every day. Naturally the kind of air we take in has a great deal to do with what we are. And that’s what weather is: hot or cold air, moist or dry air, heavy or light air, turbulent or still air.

The human organism is extremely sensitive to the weather. Every time the temperature shifts or the barometer fluctuates,, our bodies must adjust. “Spring fever”—the loginess that overcomes us during the first warm weather —is a simple example. It is not necessarily confined to spring. A group of Air Force pilots who flew from Newfoundland to Texas one day got it so badly they had to be grounded for a week.

The effects of constant heat are much more drastic. Dr. Clarence A. Mills, Professor of Experimental Medicine at the University of Cincinnati, observed that rats become sluggish and lazy when kept in a humid room at 90-degree temperature. Their fertility declines. Litters are small, many of the progeny are stillborn or die soon after birth; the young who survive grow slowly and mature late. And human beings living in the tropics are physically smaller, their babies are smaller than those in the temperate zones, infant mortality is higher. Children grow more slowly and—contrary to popular belief—sexual maturity is achieved from one to two years later.

A fairly short exposure to severe heat is reflected in the birth rate. In Florida it has been known to fall 35 percent after a hot summer. And vital statistics reveal that heat waves in the north are often followed nine months later by a slack time for obstetricians.

The late Dr. Ellsworth Huntington of Yale University examined statistics on millions of births. He found that babies conceived in the late Spring and early Fall are on the average healthier and have a longer life span (by about four years) than those conceived at other times.

They also have a better chance for a successful career. Studying the biographies of 80,000 prominent individuals in this country—doctors, lawyers, engineers, scientists, clergymen, industrialists, etc.—Dr. Huntington noted that those born in January and February (conceived in April and May) exceeded the average by 32 per cent.

Like any engine, the human body must dispose of excess heat. In the human cooling system, blood vessels draw the heat to the surface and radiate it away from the body; sweat glands cool the body by evaporation.

Unfortunately this system, is inadequate to cope with very hot weather, especially when the latter is accompanied by high humidity. For such we have a built-in thermostat. When the surrounding atmosphere makes the disposal of waste heat difficult, the body automatically lowers its rate of internal combustion and the vital processes of life slow down.

And that includes the mental processes. The brain burns food much more rapidly than any other tissues of the body.

Dr. Mills cites a series of laboratory experiments with three groups of rats, each group raised from birth at a different temperature—one at 65 degrees F., the second at 76 degrees, the third at 90 degrees. The cool-room animals required an average of 12 trials to learn their way through a maze leading to food.’ The temperate-room rats needed 28 trials. The hot-room rats averaged 48—and many in this group just gave up along the way.

Dr. Mills found that college students taking aptitude tests in hot weather achieve ratings only 60 per cent as high as those who take the same tests in winter.

Crimes of violence and passion occur much more frequently in tropical climates than in temperate zones; murder is three times more prevalent in our southern states than in the north; in northern states heat waves and crime waves coincide.

Barometric pressure influences our emotional behavior, too. When a storm approaches, the weight of the atmosphere lessens. To adjust to the falling pressure, our body tissues absorb water from the intestinal tract and begin to swell. The same process takes place inside the brain. But there the skull restricts tissue expansion, constricting the flow of blood to various lobes. Thinking becomes difficult; nervousness and depression increase.

Statistics show that at this time suicides are more common, more people have headaches, fainting spells, amnesia and insomnia. There are more traffic accidents, bank tellers make more mistakes and more packages are left in buses, trains and movie houses.

When internal combustion is checked to cut heat production our white corpuscles become sluggish and we are easy targets for infection. Appendicitis is two and a half times more fatal in the South, TB victims live only half as long.

In a more invigorating climate which encourages an active metabolism and high energy level we literally wear ourselves out. Heart failure is four times as frequent in cold weather; deaths from diabetes (a metabolic disease) increases twofold; cancer (except of the skin), pernicious anemia and respiratory diseases are far more prevalent. Fatal attacks of asthma in a surprisingly large number of cases occur after a sharp change in temperature. So do deaths from circulatory disease. In New York City it has been found that a six per cent increase above average humidity almost invariably is accompanied by a six per cent decline in the death rate among critically ill patients. Dr. Hans H. Reese of the University of Wisconsin has shown from case histories of thousands of mental patients in a majority of the cases ups and downs in psychosis coincide remarkably with the rise and fall of the barometer. “Adequate or inadequate oxidation in cells and tissues is an important explanation to psychiatric disorders,” he notes. “And this is weather-linked, biochemically measurable and clinically obvious.”

These are some of the things that weather can do to you. What can you do about the weather?

According to Dr. Mills old folks and those with metabolic or cardio-vascular ills should move to a warm, moist climate like southern Florida where the heat will lower their blood pressure and reduce the load on afflicted organs and add years to their lives. Those with arthritis, rheumatism and respiratory diseases would do best in the Southwest, where storms are infrequent. Northerners should take vacations during the cold months when they burn most energy, Southerners should try to escape the worst heat by taking off for a more temperate climate on their summer vacations.

That muggy feeling when a storm is approaching is a warning that important decisions should be postponed, calculations checked and double-checked, emotions restrained as much as possible. It’s a poor time to sell ideas to your boss or merchandise to a customer. So relax; go to the movies or a ball game, surprise your wife and kids with a small gift.

You don’t have to fight the weather, nor do you have to abjectly surrender to it. You can learn to live with it.

If you do, you’ll live longer and enjoy life more. •