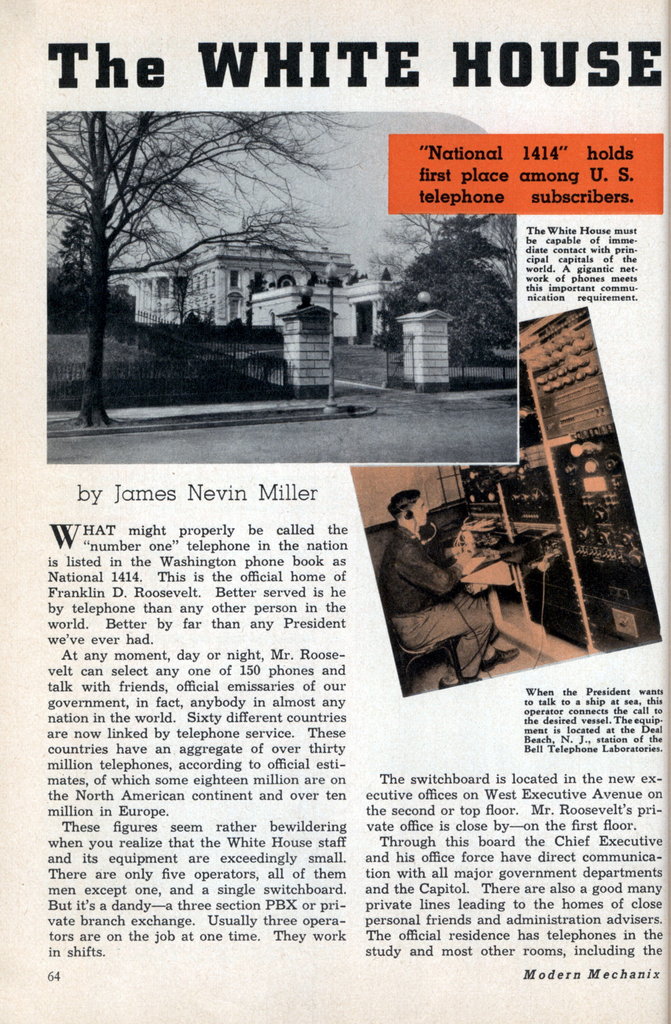 These figures seem rather bewildering when you realize that the White House staff and its equipment are exceedingly small. There are only five operators, all of them men except one, and a single switchboard. But it’s a dandyâ€”a three section PBX or private branch exchange. Usually three operators are on the job at one time. They work in shifts.

The switchboard is located in the new executive offices on West Executive Avenue on the second or top floor. Mr. Roosevelt’s private office is close byâ€”on the first floor.

Through this board the Chief Executive and his office force have direct communication with all major government departments and the Capitol. There are also a good many private lines leading to the homes of close personal friends and administration advisers. The official residence has telephones in the study and most other rooms, including the head usher’s office at the private entrance.

At first thought you naturally wonder why so many phones are utilized in the White House. But the reason is obvious enough. In his work the President probably has more responsibilities than any other business executive in the world. The entire functioning of our government, except of Congress, is under his control. So he must be immediately available every minute of every day in the year.

Operating the White House switchboard is a young woman whose ability to maneuver its cords and keys and use her head at the same time brought her to the personal attention of President Roosevelt and others in high command.

She is Louise Hachmeister, a dark-haired, square-jawed, smiling, super-operator who served for fourteen years as a New York City “hello girl.” Miss Hachmeister was assigned to the switchboard of the Roosevelt headquarters during his campaign, back in ’32. So well did she do her work that the late Col. L. M. Howe, Mr. Roosevelt’s confidential secretary, took her to the White House.

Should the President want to talk with the commander of the United States fleet, stationed temporarily, let us say, in Hawaii, he would simply pick up one of his many phones and say to Miss Hachmeister: “Get me Admiral Arthur J. Hepburn in Honolulu.” First of all, America’s number one “hello girl” would dial long distance and say: “The President wants Admiral Hepburn in Honolulu.” Whereupon the long distance operator would call the Foreign Service switchboard in New York City, which handles all calls outside the United States proper, and route the call to Honolulu, via San Francisco. Undoubtedly the high-ranking Navy officer could be reached directly or indirectly through the Pearl Harbor Navy yard, so a connection would be established with the yard. In actual practice, if the Admiral were present there, the call would be completed within five to ten minutes! But if he happened to be on shipboard the local operator would call him by wireless telephone with a message something like this: “The President is calling. How soon can he be ashore?” Chances are that in such case the Admiral would reply: “In about fifteen minutes.”

Of course, during the interim Mr. Roosevelt wouldn’t have to keep his ear glued to the receiver. The phone folks would hold the line open while he attended to his other official duties. Then when the Admiral reached shore Miss Hachmeister would ring the President and the trans-Pacific conversation would begin.

Should the President phone Europe, the call, after passing through the trans-Atlantic terminal at New York, would travel over the long-wave radio telephone circuit across the Atlantic or over three short-wave channels that were put in operation in 1928 and 1929. The terminals are at New York and London, whence connections are made respectively to the Bell system network and to the telephone systems of the various Continental countries.