I like this passage:
“BLUNDERS and hoaxes have embarrassed millions of persons, have changed the course of history, and have cost their victims millions of dollars. Science itself has been the cause of blunders. Early theories, that were accepted as fact, are still used to fool a gullible public and to sell stock in perpetual motion machines and schemes to convert base metals into gold.” 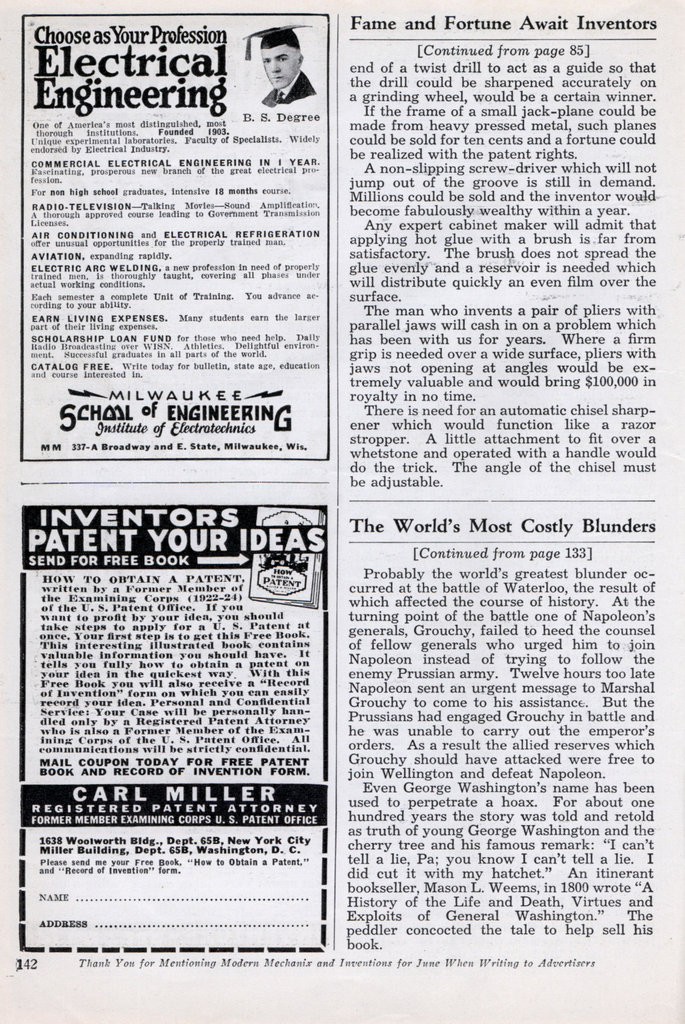 The WORLD’S MOST COSTLY BLUNDERS

Eighty years before Lindbergh, the first non-stop flight across the Atlantic was reported. That blunder is no greater than other misleading tales that have fooled the world. Here are history’s outstanding blunders and hoaxes.

BLUNDERS and hoaxes have embarrassed millions of persons, have changed the course of history, and have cost their victims millions of dollars. Science itself has been the cause of blunders. Early theories, that were accepted as fact, are still used to fool a gullible public and to sell stock in perpetual motion machines and schemes to convert base metals into gold.

In many cases newspapers have been the victim of hoaxes and blunders. The general attitude is to blame the newspapers for carelessness, but speed is so important to a highly competitive news gathering organization that little time can be devoted to checking back on stories.

One of the greatest journalistic blunders occurred in 1844 when a New York newspaper reported the sensational news of the first successful flight across the Atlantic. The story gave a very convincing account of the purported landing of a balloon near Charleston, S. C, after crossing the Atlantic from Europe in the astounding time of three days.

The story was sold to the newspaper by a writer in need of money who rushed into the office saying he had received the news by express riders from Norfolk, Va. The newspaper editors might have become suspicious because the longest flight on record up to that time was slightly more than 500 miles. But to check the story they would have had to go back to its source, Charleston, by sending fast riders from New York. Despite the swift communication available with the modern telegraph and radio, newspapers even today fall victim to hoaxes and blunders.

Probably the greatest blunder of modern timesâ€”and one of the most expensiveâ€”was the false report of the signing of the Armistice, ending the World War, on November 7, 1918. Although the Armistice was not officially signed until four days later, the entire United States was fooled by the report. Offices and stores closed, losing thousands of dollars in business, as millions of persons left their work and homes to take part in a wild demonstration to celebrate the end of the war.

An American newspaperman, Roy Howard, president of the United Press, was the unwitting instrument of the false report. He was said to have received the news from an apparently unimpeachable source, Admiral Henry B. Wilson, American naval commander at Brest, France.

Wilson, it is said, received the news from the American embassy in Paris and the embassy got it from an anonymous telephone caller, who falsely claimed to be speaking for the French Ministry of War. American newspapers, when actual signing of Armistice was reported, carefully checked truth of the story.

More recently the Associated Press was the source of a false report that for a quarter of an hour upset the entire nation. While millions of persons throughout the United States tensely awaited the result, great radio broadcasting chains and extra papers in more than thirty cities announced the startling news that Richard Bruno Hauptmann had been found guilty and sentenced to life imprisonment for the murder of the Lindbergh baby. Not until fourteen minutes later did the A. P. realize its report was wrong and send out urgent messages to kill the flash.

Newspapers which had issued extras on the strength of the false report hastily sent crews of men to buy back all copies, spending hundreds of dollars to keep the edition out of the hands of their rivals. Eleanor Medill Patterson, editor of the Washington Herald, paid $25 to’ a news boy for a copy of the Washington Post, carrying the headline HAUPTMANN GUILTY BUT ESCAPES DEATH, so that it could be reproduced in her paper.

One amusing incident of the false report was the action of the St. Louis Globe-Democrat which published an extra carrying two stories, one saying Hauptmann had been sentenced for life, the other to death.

That false report meant the expenditure of thousands of dollars for radio time and for the printing of extra editions that could not be used or had to be bought back from circulation. Oddly enough the radio was the cause of the false report. Because the courtroom was locked until the verdict had been announced and Hauptmann legally sentenced and returned to his cell, newspapermen at the trial concocted various schemes to get the verdict, as soon as it was announced, to confederates outside who would flash it to the world.

The Associated Press correspondent chose a small portable short wave radio transmitter hidden in a brief case. A system of signals was arranged with an operator at a receiving set in the attic of the court house. Unknown to the A. P. correspondent, the reporter for the New York News had made similar arrangements. While the jury was filing into the courtroom and before the verdict was announced, the A. P. operator at the receiving set received a signal which he misunderstood to be that Hauptmann had been found guilty and sentenced to life imprisonment. The news was flashed to the A. P. offices in New York and to the headquarters of the broadcasting chains.

It is believed that the New York News reporter sent a signal to his receiver to indicate that the jury was filing into the courtroom and that the A. P. operator became confused.

A year ago newspaper editors fell victim to an April Fool joke that amused scientists throughout the land. Photographs coming from Germany showed a man flying through the air with a pair of rotor wings strapped to his chest. Captions under the photographs, republished in many American newspapers, explained that Pilot Erich Kocher was the first man to fly successfully under his own power. Kocher supposedly blew into a box which converted the carbon dioxide of his breath into fuel to operate the rotors.

Editors failed to note that no cable story had appeared previously describing what would have been one of the greatest achievements of science and forgot that carbon dioxide is not a combustible gas. The hoax originated in the Berliner Illustrirte Zeitung, which faked the pictures for April Fool.

Only recently newspapers published a story from Bombay, India, describing discovery of fossil remains of a pygmy race of men fifteen inches tall. The story aroused the entire world of science. Museums and world famous scientists cabled the little village in India where the story originated. Eventually a reporter discovered that the story was a hoax concocted by natives, the result of a superstition that spreading a lie will avert bad luck.

The scientific public had not been so widely fooled since the amazing hoax perpetrated by Dr. Frederick Cook of Brooklyn, New York. He was acclaimed throughout the world as the discoverer of the North Pole, when on September 1, 1909, he reached Copenhagen and announced to the king of Denmark and to the world that he had reached the North Pole on April 21, 1908. Five days later, on September 6, 1909, Commander Robert E. Peary cabled newspapers and friends that he had reached the Pole on April 6, 1909, and found no trace of Dr. Cook’s expedition.

Investigation revealed that Dr. Cook had hired a sea captain to work out a series of astronomical observations for latitude and longitude to cover the alleged polar sledge journey. Peary brought evidence which established that the imposter had never been within 500 miles of the Pole.

Men on Moon Accepted as Truth

The public had been fooled with all sorts of oddities, the masterpiece of which probably was the “Cardiff Giant.” This famous “petrified man,” ten feet two and a half inches tall, was turned up by well diggers on a farm at Cardiff, a village near Syracuse, N. Y., on October 9, 1869. Taken on tour, after the story had swept the country, the “giant” garnered from a gullible public admissions believed to have totaled $3,000,000. It was proved finally that the Cardiff giant had been carved in Chicago from a block of Iowa gypsum, aged with acid, and then buried for a year to further age it. The perpetrator of the hoax was George Hull.

The celebrated moon hoax of a hundred years ago fooled the scientific public and was widely accepted as truth. In 1835 a New York newspaper published a story stating that the noted Sir John Herschel had discovered inhabitants on the moon through a giant telescope erected at the Cape of Good Hope. The author of the story, Richard Adams Locke, minutely described the lunar men as “four feet in height, covered except on the feet with short, glossy, copper-colored hair and with wings composed of a fine membrane.” Not until Herschel himself exposed the hoax was the story seriously questioned.

Probably the world’s greatest blunder occurred at the battle of Waterloo, the result of which affected the course of history. At the turning point of the battle one of Napoleon’s generals, Grouchy, failed to heed the counsel of fellow generals who urged him to join Napoleon instead of trying to follow the enemy Prussian army. Twelve hours too late Napoleon sent an urgent message to Marshal Grouchy to come to his assistance. But the Prussians had engaged Grouchy in battle and he was unable to carry out the emperor’s orders. As a result the allied reserves which Grouchy should have attacked were free to join Wellington and defeat Napoleon.

Even George Washington’s name has been used to perpetrate a hoax. For about one hundred years the story was told and retold as truth of young George Washington and the cherry tree and his famous remark: “I can’t tell a lie, Pa; you know I can’t tell a lie. I did cut it with my hatchet.” An itinerant bookseller, Mason L. Weems, in 1800 wrote “A History of the Life and Death, Virtues and Exploits of General Washington.” The peddler concocted the tale to help sell his book.