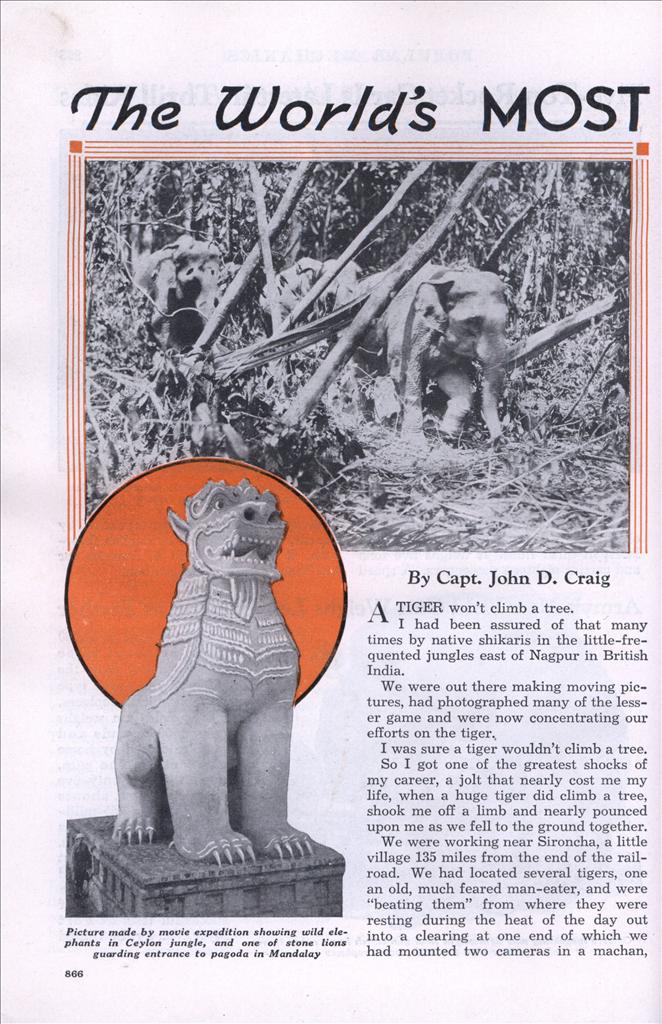 The World’s Most Dangerous Job

A TIGER won’t climb a tree.

I had been assured of that many times by native shikaris in the little-frequented jungles east of Nagpur in British India.

We were out there making moving pictures, had photographed many of the lesser game and were now concentrating our efforts on the tiger., I was sure a tiger wouldn’t climb a tree.

So I got one of the greatest shocks of my career, a jolt that nearly cost me my life, when a huge tiger did climb a tree, shook me off a limb and nearly pounced upon me as we fell to the ground together.

We were working near Sironcha, a little village 135 miles from the end of the railroad. We had located several tigers, one an old, much feared man-eater, and were “beating them” from where they were resting during the heat of the day out into a clearing at one end of which we had mounted two cameras in a machan, or tree platform. Tigers rarely look up when prowling through the jungle, so it was a simple matter to mount our cameras ten feet above the ground and camouflage them and the cameramen so they would likely be unobserved by the tiger as he came into the clearing in his attempt to get away from the beaters.

The cameramen have their hands full getting the picture without worrying about their safety, so we mounted two smaller platforms to the rear right and left and slightly higher than the camera machan. These smaller ones contained the gun guards.

A deadline had been established across the clearing in front of the camera machan and the gun guards always understood that if the tiger crossed that line, obviously charging the cameramen, they were to shoot him before he could reach and attack the camera boys.

Native beaters had been sent a mile or so back and, at a given signal, had spread out and started the beat. They hammered on tom-toms and tin cans, shouted and fired guns. The tiger heard them and in trying to escape was approaching our clearing. I heard the excited yelling of the natives as they saw him slip through the underbrush and as the clamor increased one of my men mounted in a tree far beyond the clearing signaled the tiger was approaching.

Hastily I climbed into the right gun guard platform and waited. The machan was three feet wide and six feet long, made of a native cot, a wooden frame laced with strong rope and generally used as a bed. It was firmly bound to some of the limbs of the tree about twenty feet above the ground and was fairly stable, and strong enough to support my weight. Several armed natives were crouched in the same tree some distance above me. To the left I could see my friend, Campbell, in his machan with gun ready. The camera boys were waiting to begin cranking. It was the breathless moment just before things begin to happen.

I had a good view of the clearing and could hear the tiger approaching. The beaters were quieter now as they drove the beast nearer. Then I caught a fleeting glimpse of the beast as it emerged from the jungle and took refuge in a clump of bushes within the clearing. When the tiger made this move, I realized I was defeated, temporarily at least, because my beaters, who now were climbing trees near the edge of the clearing, would not venture closer in an attempt to dislodge the tiger so we could photograph him.

There was nothing to do but wait until the tiger got ready to make a move, and meanwhile remain alert for fear he might make a sudden break for the jungle and charge toward the cameramen. I signaled to Campbell to shoot the tiger if it should make a move to cross the deadline after coming out of hiding. But Campbell thought I meant for him to shoot if he saw the tiger make any movement in the bushes, and a moment later he fired.

The bullet inflicted only a slight flesh wound, but it was painful and made the tiger very mad. Like a ball of golden lightning, the infuriated beast rushed from his hiding place and started directly for Campbell’s machan. I fired and the bullet knocked him off his feet. But he was up in an instant and charged toward the tree in which I was perched.

I felt safe because I knew a tiger wouldn’t climb a tree. My natives had explained the tiger’s weight prevents it from clinging to the trunk of the tree and climbing as a house cat does. Thus, when I saw that enraged beast doing the impossibleâ€”climbing swiftly with convulsive effort, like some enormous caterpillar, up that tree in which I considered myself perfectly secure, I was startled, to say the least.

With one bullet left in my double-barreled rifle I had no great fear for my life just then. However, the course of the tiger in climbing was such that I couldn’t take deadly aim at him while lying on the cot, so I scrambled to my feet. Meanwhile, Campbell didn’t dare shoot for fear of hitting the cameramen, and the two native boys who were on higher branches in my tree, armed with rifles, were afraid they might hit me if they fired.

It was up to me to stop that beast before he got close enough to rake me with his claws. But in a standing position, I couldn’t keep my balance. My feet pushed through the netlike bed of the cot and I grasped for a limb above my head. At that instant the head of the tiger appeared over the edge of the machan and he struck forward. Pointing the gun with one hand, I fired and saw the bullet clip toes from his huge paw.

Again with terrible effort he lunged forward, sprawling half his huge body into my machan. Fearing he would tear me to shreds before I could reload my rifle, I poked it into his face. The tiger’s hind legs were still clinging to the main trunk of the tree and as he lunged again he smashed the wood frame of the cot. Stepping back to avoid the blow, I lost my hold on the limb above. At the same instant, my guard’s rifle above was fired so close to my head the concussion jarred me. I lost my balance and fell. But the bullet ended the life of that tiger and he came crashing down into the grass beside me, parts of the machan still in his teeth and claws.

For a moment I stood jarred and trembling, looking at that beautiful animal. It seemed such a profane way of ending the contest. Yet my guard had often said, “A clean shot is the kindest death in the world, and a beast that lives by violence must die by violence.”

That is true, but I think I prefer to remember my tigers as just curious big cats who, when left to their own ways, live their lives with a majestic, fearless indifference that is not without humor. They photograph better that way. Yet I am glad in a way that incident happened. If it had not, I might still possess the dangerous belief that a tiger won’t climb a tree.