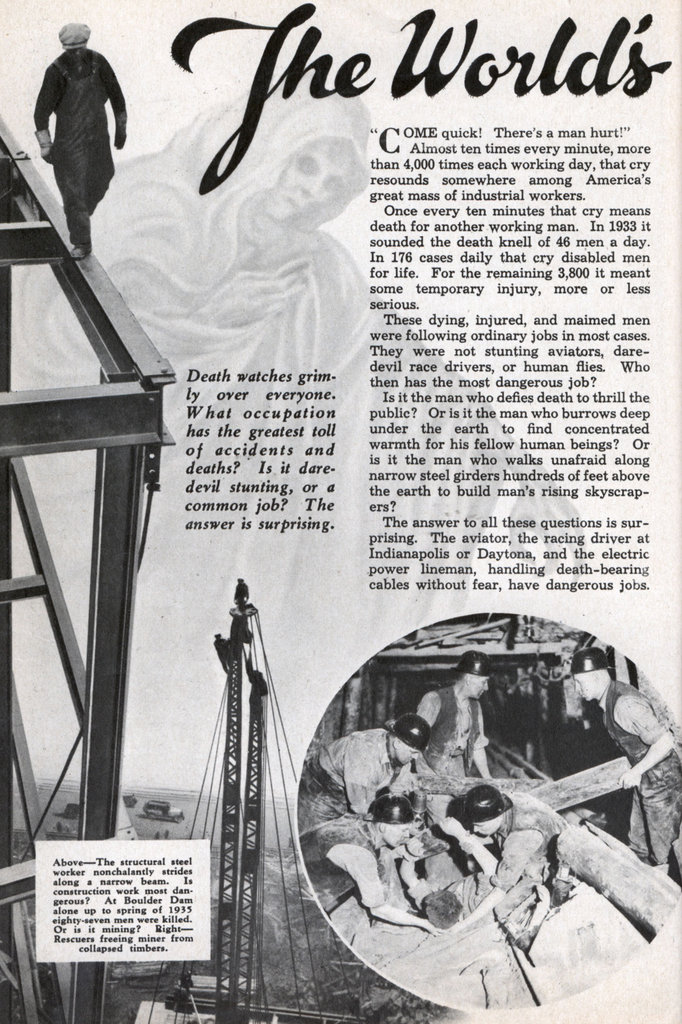 The World’s Most Dangerous Jobs

Death watches grimly over everyone. What occupation has the greatest toll of accidents and deaths? Is it daredevil stunting, or a common job? The answer is surprising.

Once every ten minutes that cry means death for another working man. In 1933 it sounded the death knell of 46 men a day. In
These dying, injured, and maimed men were following ordinary jobs in most cases. They were not stunting aviators, daredevil race drivers, or human flies. Who then has the most dangerous job?

The answer to all these questions is surprising. The aviator, the racing driver at Indianapolis or Daytona, and the electric power lineman, handling death-bearing cables without fear, have dangerous jobs.

So, too, has the man who shoots nitroglycerin, blasts in the oil and gas fields.

These, however, do not have the world’s most dangerous job.

On the graphs and charts of the National Safety Council the data on “the most dangerous job” has been plotted to the last pin scratch and the verdict, rendered with mathematical certainty does not allot the dubious distinction to the aviator or the others. Spectacular and dangerous as their occupations may be, they step gracefully aside in favor of a man whom most of the world forgets. Deep down in the bowels of the earth he will be found, toiling in the grime and darkness to dig the coal that keeps civilization warm and industries humming with power.

With an accident frequency rate of 65.28 per million man-hours of exposure, say the Safety Council figures, the coal miner works at the world’s most dangerous job.

There are approximately a million miners in this country. While these men are working just one hour of one working day, more than 65 of them will be injured at their work.

The miner then has the world’s most dangerous job.

Second to mining, is lumbering. This occupation has an accident frequency rate of 59.67 per million man-hours of work. Third in the list of most dangerous occupations is the construction industry with a rate of 55.66.

And what is the safest job? At the top of the list of some thirty industries, accounted for in the figures of the National Safety Council, stands tobacco processing with a frequency rate of only 1.43, the safest occupation in this country!

For many years coal mining has led all other employments in the annual number of fatal and permanent injuries suffered in accidents. Death dogs every stroke of each miner’s pick and no one can tell when the next one, by disturbing the fine balance of nature, will bring an avalanche down upon another helpless human being in the darkness. Over fifty per cent of the fatal and permanent injuries suffered by coal miners occur in these sudden falls of walls and roofs.

Other disabilities are caused by the cars used underground, which run wild and kill and maim. Motors short circuit, to burn and sear before currents can be cut off. Hoisting apparatus fails and cages filled with men plunge down to death. Fuses miss fire; someone goes back to see what’s wrong and the delayed explosion blows him to atoms. Black damp suffocates; dust explodes; gas shoots out with the force of a projectile.

And then, on top of all this frequent horror, a bale of hay is lowered down a shaft. It stands for a moment beneath a leaking kerosene torch and a catastrophic Cherry mine disaster with its awful record of 256 fatalities is written into the history of coal mining.

The construction industry, perhaps, comes closer home, as most persons have watched the steel men, riveting the girders together; they have seen the bricklayers, carpenters, plumbers, roofers, tile setters, glaziers, at their work. Yet few persons probably realize that construction work ranks as one of the three most dangerous occupations. One-half the casualties in this field are caused either by falls of persons or by falling objects. Men ride on loaded cranes. They walk across narrow, partially suspended beams. They lay their tools down on girders, whence they are kicked off to strike some other workman below. Boards and debris are tossed out without warning or clutter up walks and stairways to cause broken bones. Defective chains, rotten ropes, unsafe derricks and ramps, wheelbarrows with hasty “home-made” repairs, tools with split or loose handles and a hundred other serious matters give the construction industry its black eye as one of the three biggest man killers.

“The construction industry,” says W. Dean Keefer, chief engineer of the National Safety Council, “is twenty years behind the safety movement. Hundreds of boards lie around on every job with projecting nails that are paid for with amputated legs, long periods of enforced idleness, doctors’ bills and workmen’s compensation. Floor openings are unguarded, ladders rotten, material hoists unsafe. Conditions change from one hour to the next and many supervisors and workers alike seem blind to opportunities for accident prevention.”

There’s a black damp danger inherent in the construction industry also, encountered by the men who dig the deep wells into which is poured the concrete for the piers on which skyscrapers rest. Sinking these wells, the caisson diggers are often buried by cave-ins of sand or clay. Sometimes an underground stream of water is tapped and brings death by drowning. Sometimes deadly air at the bottom of the narrow treacherous shaft gets another shovel man. And occasionally the “black damp” brings unconsciousness or death.

The revival of industry has brought one reason for rejoicing that may be overlooked. According to the statistics, the man who has a job is twice as sure of getting through the day without being killed as is the unemployed man who has to hang around home from morn to night.

The latest available figures show that in 1933, 14,500 persons were killed accidentally at their regular gainful jobs, while 29,500 met death by accident in their homes. The permanent disability figures show a still wider margin of safety for the working man, with 55,000 casualties reported in occupational work and 130,000 from home accidents. Temporary disabilities reported by employers numbered 1.200,000, while home casualties of this sort rolled up the tremendous estimated total of 4,230,000.

Financially considered, the 1933 occupational accidents ran up a partial cost of $550,-000,000. This was for wages lost, medical expense and overhead cost of insurance, but does not include insurance claims paid, nor cost of property damage caused by the accidents.

Extension of the “safety first” educational movement has made industry vastly more secure than it was a few years ago, a story impressively told in that fact that just one man lost his life in the vast job of constructing A Century of Progress Exposition at Chicago. He was struck by a steel girder which got out of control in a high wind during erection of one of the Sky Ride towers. In 1893, on the other hand, scores of men suffered death during the building of Chicago’s Columbian Exposition.

And yet, efficient as the safety work is, death and injury are still inevitable in industrial occupations and somebody has to take it. In every machine shop employing 100 men there will be one death every twenty years and one major permanent disability every fifteen years. A cement mill employing 1,000 persons will normally experience six deaths and four major injury cases every five years. For every $1,000,000 of payroll represented in iron erection jobs the fatality rate is 4.5 men. It is on such facts that insurance rates are based.

Men between 20 to 29 years of age seem to be injured most frequently, although the 30-39 age group is almost as bad off. Deaths and permanent total disability follow most often the injuries to the 30-39 age group. Only five per cent of men victims of occupational accidents, are under twenty years.

Injuries to hands and fingers are most frequent, with legs and feet ranking second and arms third. Injuries to head, face and neck rank fourth in frequency and eye injuries fifth. These statements are based on New York statistics and probably approximate what can be expected elsewhere.

Grim as the figures are, however, it should not be felt that in entering upon industrial life it is equivalent to receiving a death or disability warrant. According to the insurance folks, the industrial worker at the age of twenty has a life expectancy of forty-two more years ahead of him. And that’s time enough to get a lot of good work done.