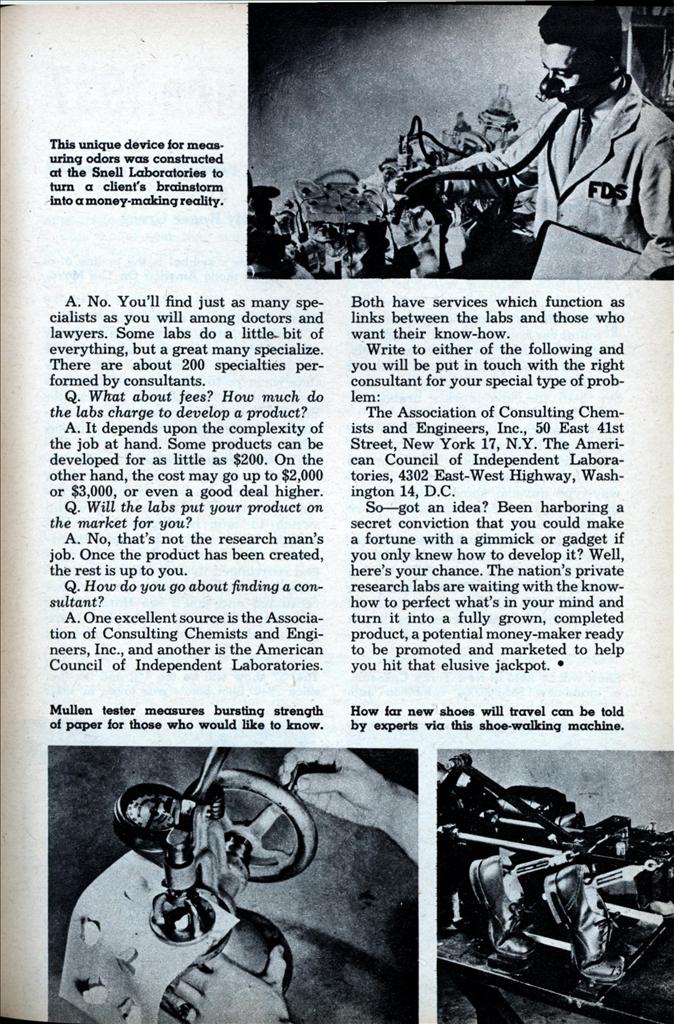 The idea hit him with sledge-hammer force!

“Why,” said the man to himself, “couldn’t this idea be adapted to the home? Why should a man have to whip up a lather on his face? Here was a simple, time-saving method. Push a lever, get a lather. It could make a fortune.”

It could and it did. The man’s name was J. George Spitzer, who later teamed up with another enterprising businessman, Marvin Small. The product is called Rise and it comes in a pressurized can which squirts instant lather into your palm when you press a valve. The two men later sold Rise to a pharmaceutical firm for a nice sum.

The most interesting part of this story is that neither Spitzer nor Small possessed the technical know-how to create the gadget itself. They went to the offices of a consulting chemist and said, in effect: “This is the idea we have. The completed product must do two things, namely: 1. enable a man to shave in less time; 2. give him a better shave.

Foster D. Snell, Inc., of New York City, an organization of consultants, including chemists, bacteriologists, engineers, physicists and medical personnel, produced a product that did just that.

Private research laboratories grew up because smaller businesses have neither the time nor the money to develop their own research divisions. Recent figures show that fewer than 3,000 of the country’s quarter-million manufacturing companies have their own research setups. But problems do turn up and when they do, the private consultants are called to set things right. And they do a crackerjack job for individuals, too.

Here’s an example of how they work: A couple went to the Testing and Research Laboratories in New York one day in search of a product with which to start a small business in their home. They discussed with Evelyn Ellenson, who runs the organization, a number of possibilities, finally narrowing their choice down to a new type of hair dressing.

The lab’s experts went to work. A short time later their product was ready. Actually, it was a fairly simple thing to create, since it consisted of standard ingredients, but it looked good, smelled nice and kept the hair neat. The couple are now in business and at last report were doing fine.

Here’s another example of what these labs can do. Alex Marelia and Paul Nelson got an idea for a new kind of dog collar, one that could be impregnated with something to repel fleas and other annoying pests which irk pooches. They wanted something non-toxic, odorless and stainless which would render Fido itchless.

Marelia and Nelson had the idea but lacked the know-how to create it. They visited a couple of laboratories, explained what they wanted and a special ointment which impregnated a dog collar against fleas was dreamed up. Carefully tested, the product worked fine. Marelia and Nelson set up Guardian In- dustries in the Bronx, N.Y. and began producing their K-9 Guardian Flea Killer Collar. In the first six months of operation, they sold 500,000 of them throughout the country. Using the same collar ingredient, the enterprising young team is now putting out a Bird Guardian —a metal container containing the ointment—designed to keep mites off cage birds.

Over and over the labs provide the technical skill which results in a moneymaker for a customer with a good idea. Alfred R. Globus, director of reasearch of United International Research, Inc., tells about the man who walked into his office with an interesting idea. Women who own fur coats, he pointed out, must send them to professional furriers for cleaning and preservation. Why not make a formula which would enable a woman to do this in her own home?

Experts wrestled with the idea for two months and came up with the answer. Mr. Globus reports that his client now has a thriving business putting out the product.

On a larger scale, take the case of the Wilkins Company of Cortland, N. Y., which makes lens-cleaning material for various kinds of safety glasses used by industrial workers. When plant employees went from one kind of temperature and humidity to another, their glasses fogged up. Ralph R. Wilkins, president of the company, handed the problem to the Evans Research Company.

Lab men went to work and came up with an anti-fogging material in the form of liquid which is sprayed onto the glasses and wiped off with tissue. The film that remained on the glass prevented the irritating fogging.

Elizabeth Adam, head of the Adam Laboratory in New York, is another well-known chemist who helps people perfect profitable ideas.

One fellow thought egg shampoos— always popular with the ladies—would be a real money-maker. When the Adam Laboratory solved his problem he ended up in a highly successful business.

One chap went to the Snell experts with an idea for a paint brush that wouldn’t have to be dipped into a paint can. The result was a brush which has a pipe going into the handle. The other end of the pipe is connected to a reservoir where the paint is kept under pressure and controlled by a trigger in the handle. Just press the trigger and you get paint when it is needed. The fellow is now showing his novel brush to a number of interested manufacturers.

Curiously, laboratories report that doctors are especially frequent customers. They come across a new chemical or develop a method of treatment which they believe can be mass produced, but need technical assistance in working it out. A good example is a novel treat- ment for athlete’s foot in the form of an ointment which was recently developed.

Businessmen look with considerable fondness on the country’s private research laboratories for by testing, retesting and long hours of conferences, labs often discover commercial uses for materials which would otherwise be thrown away.

A prime example is the case of the oat hulls. The Quaker Oats people, finding themselves with mountains of the useless hulls, took their problem to the Miner Laboratories of Chicago. The result? The development from the hulls of furfural—a solvent, fungicide and source of many commercially valuable derivatives.

Now let’s take stock. What have the nation’s private research laboratories to offer you? How can they help you develop a potential money-making idea?

Here are some answers to questions you may have at this point: Q. Where are these consultants located?

Q. Are all consultants alike? That is, do they do the same work?

A. No. You’ll find just as many specialists as you will among doctors and lawyers. Some labs do a little, bit of everything, but a great many specialize. There are about 200 specialties performed by consultants.

Q. What about fees? How much do the labs charge to develop a product?

Q. Will the labs put your product on the market for you?

A. No, that’s not the research man’s job. Once the product has been created, the rest is up to you.

Q. How do you go about finding a consultant?

A. One excellent source is the Association of Consulting Chemists and Engineers, Inc., and another is the American Council of Independent Laboratories.

Both have services which function as links between the labs and those who want their know-how.

Write to either of the following and you will be put in touch with the right consultant for your special type of problem: The Association of Consulting Chemists and Engineers, Inc., 50 East 41st Street, New York 17, N.Y. The American Council of Independent Laboratories, 4302 East-West Highway, Washington 14, D.C.

So—got an idea? Been harboring a secret conviction that you could make a fortune with a gimmick or gadget if you only knew how to develop it? Well, here’s your chance. The nation’s private research labs are waiting with the know-how to perfect what’s in your mind and turn it into a fully grown, completed product, a potential money-maker ready to be promoted and marketed to help you hit that elusive jackpot. •