Mechanix Illustrated
Issue: Mar, 1957
Posted in: Toys and Games
7 Comments on Their Ship Came in… from Tokyo (Mar, 1957) 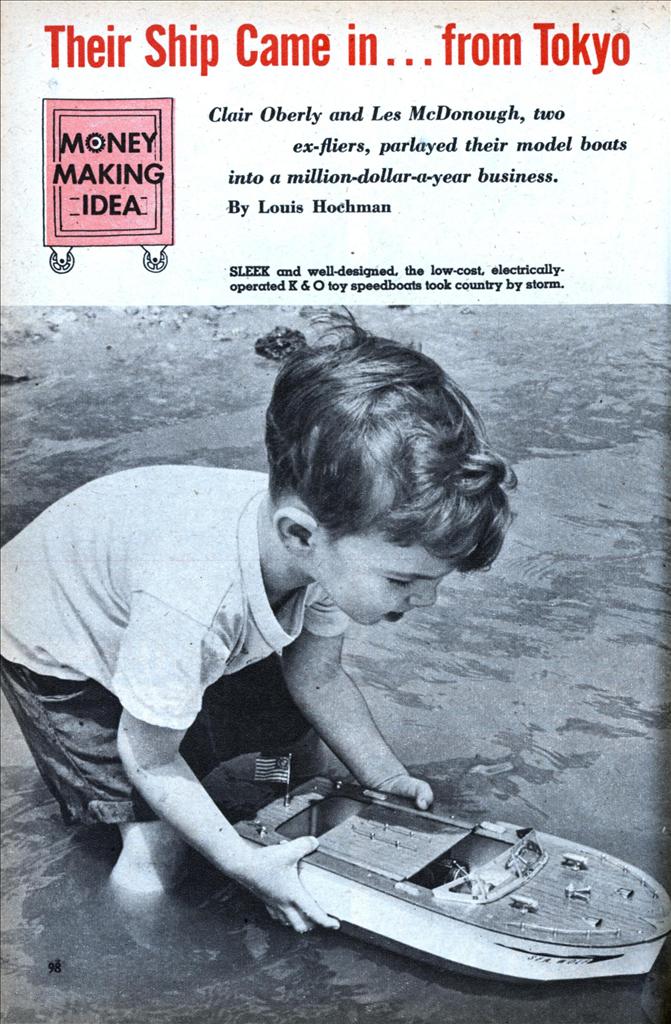 Their Ship Came in… from Tokyo

They didn’t even know each other until they were both assigned to the same flight one day. But this chance meeting developed into a fast friendship and a model boat business that began with a modest $100 investment. Today the model boats—the Fleet Line and K & O Boats, electrically operated toy speedboats of modern design—provide work for more than 1,000 employees and an annual million dollar gross income for the two ex-fliers.

Clair had been running a retail toy store in Wisconsin as a sideline at the time of the meeting. Since they were Tokyo-bound, Clair decided to investigate the toy market in that city.

In Tokyo, the fliers visited various toy manufacturers and picked up an assortment of items—a screw set, boat kit, cheap outboard motor and some accessories.

When they returned to California they contacted some jobbers in the Los Angeles area. The toys, said the jobbers, were practically worthless. Almost nothing was plated, the metal parts would corrode easily, the wood wasn’t properly cured, the screw sets wouldn’t fit domestic motors, etc.

Les and Clair pointed out these flaws to the Japanese on subsequent flights, an invaluable service since the Japanese couldn’t afford to keep a man Stateside. As a result, after about their fourth trip to Tokyo and an outlay of $50 each, they began getting a warmer reception from the Los Angeles jobbers.

They kept their jobs with the Flying Tiger Line for three years, pouring the profits into letters of credit with Japanese manufacturers and bringing in freight loads of constantly improved goods which sold at phenomenally low prices. The airline cooperated by allowing them to stagger their flight schedules so that one could work the local end in the States while the other handled the manufacturing end in Tokyo.

The first big break came when Clair decided to put out a boat kit with a motor in it. He designed the No. 101 Speedster kit, the first complete model boat kit ever put on the market. It contained everything the model boat builder needed—motor, hardware, fittings, deck, hull, etc., and sold for only $11.95. The 101 Speedster kit was made in Japan in 1952 and 51,000 were sold in the States. It was this kit that really put the K & O Models Company on the map.

They have since put out another complete kit with motor for $4.95 and ready-make craft with motors for as low as $2.29.

Things rolled along smoothly until one serious problem came up. The wooden boat hulls being made in Japan were not too good because of improper curing of the wood. So in 1953, Les and Clair made a bold move. They decided to set up their own plant in the United States and manufacture the boats, using the Japanese-made decks, fittings and motors with U. S.-made plastic hulls. They took a leave of absence from their flying jobs and leased a plant in Van Nuys, Calif.

The new company took a severe body blow when the first 10,000 boats they turned out proved to be worthless. Parts didn’t fit, tolerances were off and drive screws started to pop. The novice businessmen had to discard every one of them and $65,000 went into the drink.

After this near-fatal mishap Clair took off for Tokyo with a staff of assistants to supervise plant production there. Les took over operations on the home front.

Under Clair’s supervision, the Japanese, who are capable of making excellent quality goods, produced merchandise with an unusually low defective rate—less than one-half of one per cent!

In the home plant, new methods to attach the wooden decks to the plastic hulls with drive screws were sought. Since the normal pressure used on these drive screws cracked the plastic, K & O, through the efforts of the Burklyn Company of Los Angeles, pioneered the development of a smaller, less powerful air hammer which does the job.

Painting problems were solved with a $20,000 conveyor belt spraying unit which automatically moves the boat hulls past spraying booths and through an infra-red drying oven.

Perhaps K & O’s best break came when Clair conceived the idea of making authentic working miniatures of famous outboard motors. Les and Clair worked a full year with a Johnson motor, scaling it down until they perfected a tiny working replica that was accurate in every detail and color to its full-size counterpart. When the Johnson people saw it they gave K & O exclusive world-wide rights to use the name of Johnson in their miniatures. Les and Clair later obtained similar rights to the Evinrude, Mercury and Scott-Atwater outboard designs.

These little motors measure 5-5/8 in. in length, are electrically operated and precision-made of die cast aluminum.

The tiny outboards propel their craft through the water at close to four feet per second. Harmless to the fingers, they can be clamped to a cocktail glass and make excellent mixers.

Duplicating in miniature name brand equipment buoyed K & O’s gross sales. The company now thanks as the largest manufacturer of built-up boats in the world.

K & 0’s low-priced inroads into the field of high quality toys have established a name and fortune for Les McDonough and Clair Oberly, two ex-fliers who will be the first to admit that their ship literally came in—from Tokyo. •