Popular Electronics
Issue: Dec, 1958
Posted in: Computers, Robots
Tags: Isaac Asimov
No Comments on THERE ARE ROBOTS AMONG US (Dec, 1958) 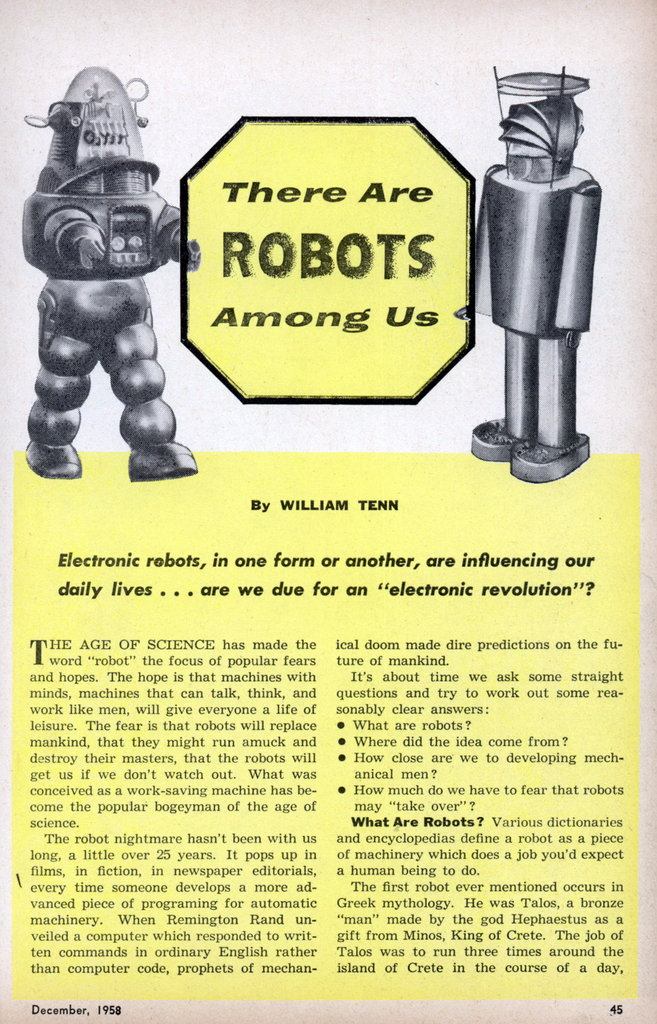 THERE ARE ROBOTS AMONG US

Electronic robots, in one form or another, are influencing our daily lives . . . are we due for an “electronic revolution”?

THE AGE OF SCIENCE has made the word “robot” the focus of popular fears and hopes. The hope is that machines with minds, machines that can talk, think, and work like men, will give everyone a life of leisure. The fear is that robots will replace mankind, that they might run amuck and destroy their masters, that the robots will get us if we don’t watch out. What was conceived as a work-saving machine has become the popular bogeyman of the age of science.

The robot nightmare hasn’t been with us long, a little over 25 years. It pops up in films, in fiction, in newspaper editorials, every time someone develops a more advanced piece of programing for automatic machinery. When Remington Rand unveiled a computer which responded to written commands in ordinary English rather than computer code, prophets of mechanical doom made dire predictions on the future of mankind.

It’s about time we ask some straight questions and try to work out some reasonably clear answers:

â€¢ What are robots?

â€¢ Where did the idea come from?

â€¢ How close are we to developing mechanical men?

â€¢ How much do we have to fear that robots may “take over” ?

What Are Robots? Various dictionaries and encyclopedias define a robot as a piece of machinery which does a job you’d expect a human being to do.

The first robot ever mentioned occurs in Greek mythology. He was Talos, a bronze “man” made by the god Hephaestus as a gift from Minos, King of Crete. The job of Talos was to run three times around the island of Crete in the course of a day, throwing huge rocks at any invaders from the seaâ€”a Weapons Alert System and Guided Missile in one package! Talos had a single “vein” running from his neck to his ankle, stoppered somewhere in his foot by a large bronze pin. Medea, the wife of Jason, killed Talos during an invasion by pulling out the pin. In modern terms, that single vein could have been his main power cable and the pin his fuse.

Ali Baba’s door in the Arabian Nights’ story of the “Forty Thieves” which responded to the sound sequence signal of “Open Sesame” may have been the inspiration for the Televox, a telephone system invented in 1927 for the remote verbal control of various factory mechanisms.

Frijthof’s Saga, written about the fourteenth century, supplies a tantalizing early hint of computer-directed sonar, Direction Finder and Televox. According to the saga, this redoubtable Icelander used no helmsman: he merely told his ship where he wanted to goâ€”and she obeyed.

Most of these robots were more fable than fact, like the “automatic” chess player which fascinated all Europe in the eighteenth centuryâ€”until some busy-body discovered a man inside the machine! Less wonderful, perhaps, but less phony, too, were the J. N. Maskelyne automatons, exhibited in London between 1875 and 1880. One of them, Zoe, drew pictures; the other, Psycho, played cards and could do simple mathematics. These were, however, only a little more complicated than the flying and singing birds made in Switzerland for hundreds of years: both birds and automatons were merely clockwork mechanisms.

Where Did “Robots” Originate? The origins of the word robot are still a matter for argument. It may have been derived from various words meaning “work” or “compulsory service,” but the most logical source is the Czech robotnikâ€”an ancient name for a serf. The robot can be considered a mechanical serf or slave. The play “R.U.R.” by Karl Kapek, produced in 1920, first gave the word robot to the languages of the world.

For over a quarter of a century, the evolution of a mechanical-electronic robot has proceeded, in the pages of fiction, on the widening screens of movie houses, and, above all, in the popular imagination. Fritz Lang’s 1926 film Metropolis featured a female robot who was the first of a distinguished cinematic lineâ€”a line which eventually included such brainy clankers as the robot from another planet in The Day the Earth Stood Still and the swivel-headed , Robby in MGM’s Forbidden Planet. A delightful series of stories by Isaac Asimov, which was recently brought out in book form under the title I, Robot, even covers the possibilities of a revolt by having “Three Laws of Robotics” built into the circuits of his metallic characters!

Robots, as we visualize them today, are a relatively recent idea, an idea still being developed in the engineering mind as well as in the more colorful imagination of the man in the street.

Mechanical Men? Here’s a definition in terms of modern conceptions. Robots are basically mechanical rather than protoplasmic creatures, whose control and sensory apparatus is electrical rather than neural.

They are manufactured units capable of handling and processing a given job of work with a minimum amount of human supervision, thus releasing many people for more interesting, more rewarding and less dangerous pursuits. In order to accomplish this, they must be capable of reaching certain decisions completely on their own.

That definition should sound familiar. It is a description of a tape-controlled lathe or production line, built to inspect, catch and correct its own errors. This is automation at its best. It is a description, if you like, of a single electronic computer handling an entire office-load of clerical work, a computer backed by a small programing staff which translates the input data into acceptable form. It is also a description of a guided missile with a proximity fuse, or of the recently announced Hughes’ Digitair â€”an airborne computer that can fly an Air Force jet interceptor from after take-off to landing and all through combat.

This means that we already have robots, that robots have already begun to take over. Where then are the gear-grinding mechanical men who cross metal arms on their breastplates, look at us with dog-like devotion through photosensitive silicon cells, and say, “Yes, master, I have waxed the Buick and changed the flat tire,” in absolutely flat, toneless voices?

The answer is that they never were and probably never will be. The hard reality of manufacturing processes has an annoying way of taking an entirely different line from the one that literary imagination and artistic prophecy have projected. Da Vinci, the fifteenth-century Florentine, drew dozens of bird-winged and bat-winged flying-machine suggestions: the drawings have little in common with the airplane as it has actually developed since the time of the Wrighf brothers. Similarly, the humanoid electronic creatures from the drawing boards of our science-Action illustrators bear little relationship to the silent, spacious, air-conditioned rooms that house the computers of today or the long rows of automated machinery.

Will the Robots Take Over? Our tape-directed factories and offices, our digital analog computers, our “thinking” weapons â€” these are true robots, and they have been here among us for some time now. But what of the future? Will they become more “human,” in shape and mind, untilâ€” eventuallyâ€”they are better than we are?

It does not seem very likely.

Suppose we develop space travel and decide we’d rather use robots than relatively delicate men to inspect and repair the outside of the ship if anything goes wrong in the cold, airless, interplanetary deeps. Will it be a man-like creature who will scamper outside with hammer and monkey wrench? Hardly. On the basis of sheer engineering economics, it makes more sense to have a “robot” in the form of a self-repairing hull.

Instead of robot miners going underground with lamps built into their foreheads, it is more probable that we shall see something in the nature of automatic mine shafts, governed by computers capable of geological evaluation. And much more possible than a robot butler responding to a knock on the door is a robot door, programed to open only to certain signalsâ€” “Open, Sesame,” for example!

All of which gets us back to the fear of robots replacing human beings. A robot is, after all, no more than a machine; and a machine is merely an automatically operating tool. Every tool is made for a specific functional purpose, and so is every robot.

Man, on the other hand, has no specific functional purpose. More than that, he has reached his present eminence in evolution largely because he is one of the most non-specialized animals ever. He can survive in a great number of environments, civilized or completely savage. A robot cannot. A robot, like any machine, is a product and a native of a single civilization only, built to operate and survive in an extremely narrow set of conditions.

A robot, at best, is a complete prisoner of its own specialization. For hundreds of thousands of years, Man, in his versatile way, has destroyed or domesticated every specialized creature he has ever encounteredâ€”from specialized carnivores like the saber-tooth tiger down to specialized parasites like the polio virus.

He has little to fear from the latest of theseâ€”the robot made by himself for his own uses.