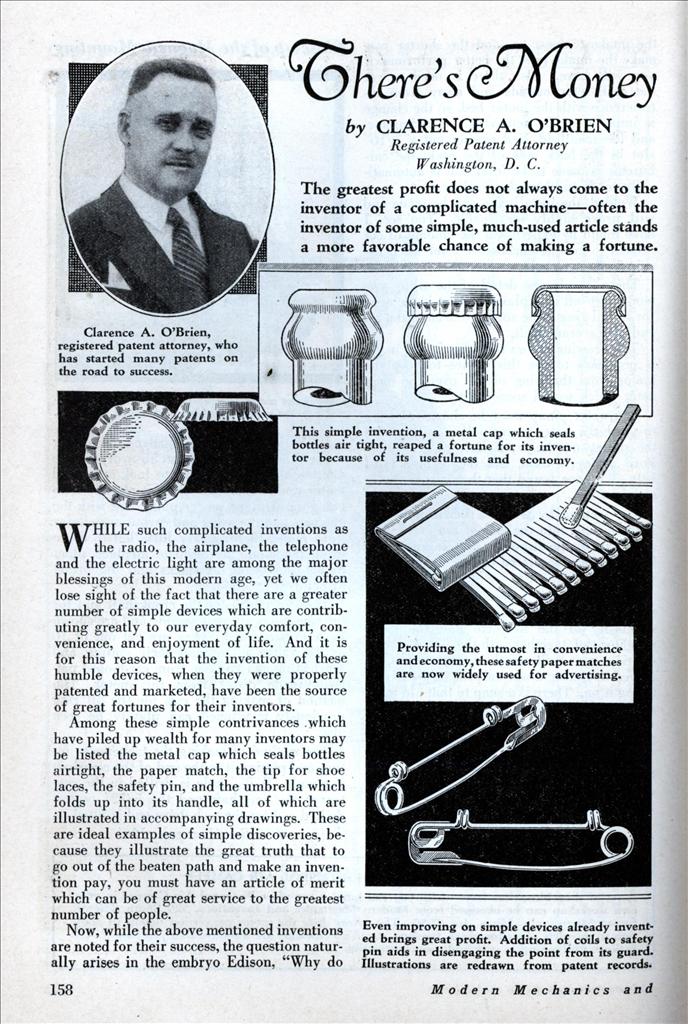 The greatest profit does not always come to the inventor of a complicated machine—often the inventor of some simple, much-used article stands a more favorable chance of making a fortune.

WHILE such complicated inventions as the radio, the airplane, the telephone and the electric light are among the major blessings of this modern age, yet we often lose sight of the fact that there are a greater number of simple devices which are contributing greatly to our everyday comfort, convenience, and enjoyment of life. And it is for this reason that the invention of these humble devices, when they were properly patented and marketed, have been the source of great fortunes for their inventors.

Among these simple contrivances which have piled up wealth for many inventors may be listed the metal cap which seals bottles airtight, the paper match, the tip for shoe laces, the safety pin, and the umbrella which folds up into its handle, all of which are illustrated in accompanying drawings. These are ideal examples of simple discoveries, because they illustrate the great truth that to go out of the beaten path and make an invention pay, you must have an article of merit which can be of great service to the greatest number of people.

Now, while the above mentioned inventions are noted for their success, the question naturally arises in the embryo Edison, “Why do some inventions succeed and others fail?

Unsuccessful patents, and there have been thousands of them, fail for various reasons. The invention would not work. The cost of manufacture was too great. The idea was not new. But the chief reason for failure in a great many cases can be traced to the fact that there was no demand for the invention, or to failure to create a demand where none existed before.

Inventions may also be graded as to their commercial or sales-pushing value. Make a survey of the number of probable users of the invention. For example, the possible sales of a $5000 automobile in a city of thirty thousand people in which only a few earn $3000 per year or over—as in certain mill towns—would not be nearly as numerous as in a town of thirty thousand people of a purely residential character, where three thousand men may earn average salaries in excess of $3000.

But substitute overalls for the $5000 automobiles, and the market possibilities are at once reversed—for think of the large number of factory workers. From this it is plain that the inventor should always consider the territories in which his device is offered for sale, as well as the character of the invention itself.

The reader should always know, too, that only when the patent well and truly covers all the patentable novelty will the full value of an invention be secured to the patentee and be represented by the patent.