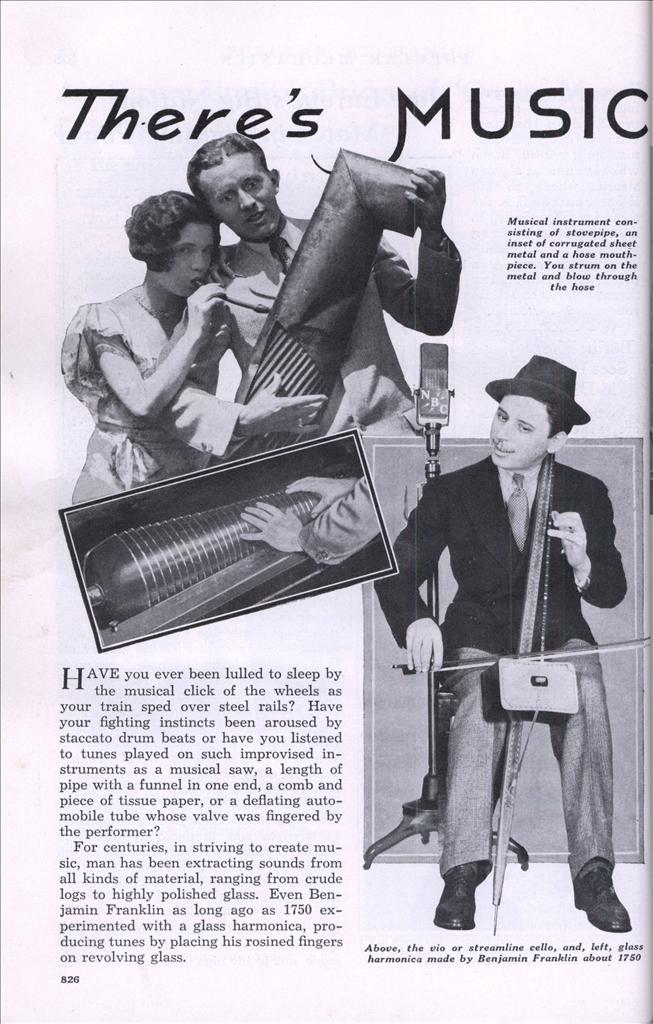 There’s Music in Everything

HAVE you ever been lulled to sleep by the musical click of the wheels as your train sped over steel rails? Have your fighting instincts been aroused by staccato drum beats or have you listened to tunes played on such improvised instruments as a musical saw, a length of pipe with a funnel in one end, a comb and piece of tissue paper, or a deflating automobile tube whose valve was fingered by the performer?

For centuries, in striving to create music, man has been extracting sounds from all kinds of material, ranging from crude logs to highly polished glass. Even Benjamin Franklin as long ago as 1750 experimented with a glass harmonica, producing tunes by placing his rosined fingers on revolving glass.

Is there really music in everything? The growing popularity of many recently devised musical devices used on both professional and amateur radio programs has aroused the interest of science in this question. On one radio program, for example, the jawbone of a horse is being used in the orchestra as a percussion instrument. On another, the bazooka, consisting of two pieces of lead pipe with a funnel in one end, produces weird music, while on amateur hours musical devices ranging from a one-stringed homemade fiddle improvised from a kitchen broom to a set of wine glasses and tumblers containing varying amounts of water have been used.

Sound engineers and other scientists recently have interested themselves in the technical aspects of the sounds produced by improvised musical instruments of this type and have found that in some cases their sound vibrations, photographed with the aid of an oscillograph, compare favorably with those of the more familiar musical instruments.

Psychologists and music critics, however, have looked elsewhere for the answer as to whether there is music in everything. Sound, many psychologists point out, is the medium whereby the higher animals express their emotions, and sound conveyed by varying tones had a basic appeal long before the language of human beings came into existence. Thus sound today, produced on unusual and improvised instruments, may excite in you the same emotions primitive drums and other crude instruments aroused in our ancestors.

“This sound, however, is apt to be confused in the minds of many with real music, which it is not,” states Julian Seaman, nationally known musical authority. “All music is based upon certain definite harmonic intervalsâ€”either diatonic harmony or more primitive systems. No matter what its primitive origin may be, real mu- sic must be adapted to some arbitrary system of sound as all music is artificial. The ordinary drum, for example, is not a music instrument while the tympani, commonly called the kettledrum, is a keyed instrument which produces tone.”

Musical saws, bazookas and other similar innovations are, according to Mr. Seaman, merely trick devices used to produce tone by extraneous means. Many other types of “instruments” such as musical washboards produce no tone but punctuate like a drum. Such punctuation, depending upon timing, or frequency of beats, say the psychologists, can appeal to our basic emotions just as a certain timing in the beating of a primitive log drum will whip African tribesmen into a fighting frenzy, while a different timing on an ordinary drum will make civilized men forget fatigue on long marches.

A great many of the recently improvised instruments have no special significance other than to show the ingenuity of the performer, scientists say. Others, however, may be the forerunners of new types of musical instruments or lead to the modernization of familiar, accepted instruments. An example of the former class is a weird instrument devised by a Los Angeles amateur who made use of a length of stovepipe with an elbow of the same material. It has an inset of corrugated sheet metal and a hose mouthpiece. Unusual tones are produced either by strumming on the corrugated metal or by blowing into the hose and the two methods, employed at the same time, give out sounds like the booming of a tom-tom and the piping of an oriental reed instrument.

Another ingenious device developed by a Spanish musician is a one-stringed instrument made of a pair of bellows with a handle in the shape of a violin. The string is connected with the needle and diaphragm taken from an ordinary phonograph. With a small horn at the top of the handle, the instrument, when played with a bow, sounds surprisingly like the voice of a soprano singer. Not all the improvised instruments fall into this freakish category, however. Lennard Hayton, well known musical conductor, believes experiments of this type in extracting “music” from everything may lead to modernizing musical instruments in an effort to reduce their clumsiness without detracting from their tonal value.

The first step in this direction, Mr. Hay-ton believes, is the streamline cello developed by Dr. Herman Fischer, noted acoustical authority. While the vio, as it is technically known, to unaccustomed eyes looks like a freak instrument, it has been designed along scientific lines. The large clumsy sound box has been replaced by a modern resonator, scarcely larger than a small cigar box, and one string does the work of four.

“Science has ignored completely musical instruments in developing our modern scientific marvels,” Mr. Hayton points out. “Most of our musical instruments have come down through the centuries with little or no improvements. The fiddle that Nero played when Rome burned was practically the violin we use today. I hope scientists will turn their efforts to music and let us musicians share the benefits which they have produced for other fields. They have succeeded in condensing the tonal value of a 110-piece orchestra into the narrow confines of a radio loudspeaker. Why can’t they reduce the size of the instruments themselves without loss of tone value?”

Thus while amateurs and professionals both are devising new methods whereby “music” may be extracted from everything, they are accomplishing more than merely amusing radio audiences. They have attracted the interest of modern science and focused attention on experiments which may result in new types of instruments and musical effects.