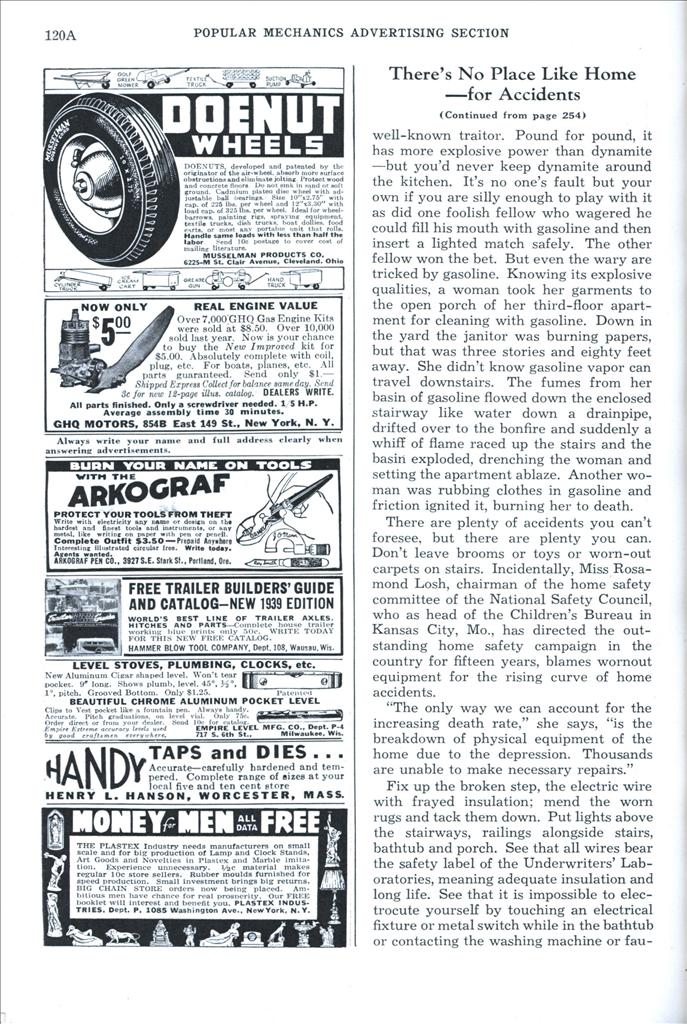 MAKING gravy, you’d say, is a pretty safe occupation. One housewife will tell you it’s mighty dangerous; she was painfully burned by a flour explosion over her skillet. Another woman was careless with bleaching powder and set the house afire. Still another learned disastrously that it’s not safe to clean clothes with gasoline, even in open air. It all adds up to the fact that you’re living in a very dangerous place. More people were killed in their homes last year than died on all the streets and highways. Four times as many were injured.

Ram your automobile at seventy miles an hour into the broad side of a freight car and you smash right into the front page, with pictures. Trip over a carelessly parked roller skate on the basement stairs and they give you a three-line obituary back in the classified section. Death on the highway is spectacular. Death in the kitchen or the front hall is not so newsy, but just as permanent. And a lot more frequent.

There ought to be a law to protect you in your home. Let one crazy driver hurtle through a bridge railing and you find legislatures and city councils and safety commissions and highway engineers formulating new laws and designing safer roads to end accidents forever. But your house is your castle at your own risk, and no legislator is going to introduce an act regulating the indoor parking of roller skates, enforcing the tacking of loose rugs and forbidding you to set the house on fire by sticking a penny in place of the burnt-out fuse when the lights go out. You’ll have to be your own inspector and policeman.

Maybe you think we’re overrating the perils of home life in America. Well, look at the figures. Life was a lot safer in many ways during 1938. Fewer people died in airplane and railroad wrecks. Deaths in automobile crashes decreased. Fatal accidents at work dropped under the 1937 total. Home accidents alone jumped higher. There were 32,500 persons fatally injured right at homeâ€”500 more than the national total of traffic deaths. Non-fatal injuries were even more alarming. On the streets, 1,100,000 people disabled, temporarily or permanently; at home, 4,750,000â€”about one in every twenty-seven persons in the United States!

Well, what are these lurking perils? What can you do about them?

Stairs and steps are the most dangerous places. Twenty-three per cent of the accidents occur there. Nineteen per cent happen in the yard. Your kitchen is your deadliest room, site of eighteen per cent of home mishaps. Living room, porch, bedroom and basement follow in order.

If accidents came where you expected them, they wouldn’t happen. But you would never suspect the gravy of being an explosive. Stirring her mixture in a skillet on the kitchen stove, a housewife picked up the flour sifter to add thickening. As the cloud of flour descended there was an explosive flash and she leaped back screaming, her face and hands painfully burned. The concentration of flour and air had been just right for a dust explosion touched off by the flames licking up around the skillet.

Nor would you suspect the hidden perils of ordinary household bleaching powderâ€” sodium peroxide. A dramatic reenactment of what happened in one home is given in a fire-prevention demonstration by an insurance company. A small amount of the powder is mixed in a bowl of sawdust. Water is added, and in a moment the contents of the bowl blaze up fiercely. The same thing might happen if the bleaching powder were spilled on a wooden floor, ground in, then became moist. But it’s so rare you’d never be looking for it. Gasoline, of course, is a well-known traitor. Pound for pound, it has more explosive power than dynamite â€”but you’d never keep dynamite around the kitchen. It’s no one’s fault but your own if you are silly enough to play with it as did one foolish fellow who wagered he could fill his mouth with gasoline and then insert a lighted match safely. The other fellow won the bet. But even the wary are tricked by gasoline. Knowing its explosive qualities, a woman took her garments to the open porch of her third-floor apartment for cleaning with gasoline. Down in the yard the janitor was burning papers, but that was three stories and eighty feet away. She didn’t know gasoline vapor can travel downstairs. The fumes from her basin of gasoline flowed down the enclosed stairway like water down a drainpipe, drifted over to the bonfire and suddenly a whiff of flame raced up the stairs and the basin exploded, drenching the woman and setting the apartment ablaze. Another woman was rubbing clothes in gasoline and friction ignited it, burning her to death.

There are plenty of accidents you can’t foresee, but there are plenty you can. Don’t leave brooms or toys or worn-out carpets on stairs. Incidentally, Miss Rosamond Losh, chairman of the home safety committee of the National Safety Council, who as head of the Children’s Bureau in Kansas City, Mo., has directed the outstanding home safety campaign in the country for fifteen years, blames wornout equipment for the rising curve of home accidents.

“The only way we can account for the increasing death rate,” she says, “is the breakdown of physical equipment of the home due to the depression. Thousands are unable to make necessary repairs.”

Fix up the broken step, the electric wire with frayed insulation; mend the worn rugs and tack them down. Put lights above the stairways, railings alongside stairs, bathtub and porch. See that all wires bear the safety label of the Underwriters’ Laboratories, meaning adequate insulation and long life. See that it is impossible to electrocute yourself by touching an electrical fixture or metal switch while in the bathtub or contacting the washing machine or fau- cet. Insulation of your washing-machine may wear out some day and put you in danger of a shock by touching the washer. You can prevent it by grounding the machine with a wire connecting its metal frame with a water pipe. Then, if electricity leaks, a fuse would blow before harm is done.

A home safety questionnaire is an easy way to check over the hazards of your house. That is a principal feature of Miss Losh’s 365-day campaign in Kansas City. A force of 3,000 volunteers makes a house-to-house canvass, offering to inspect homes for hidden dangers. Children are given self-inspection blanks in the schools to be taken home. A tour of the house with this questionnaire eliminates many a hazard. Here are some tips you can take from it: Don’t use a gas heater in a closed bathroom. Keep oily rags and mops in a fireproof container. Never handle electrical fixtures with wet hands. Put bells on bottles of poison, or stick pins in the corkâ€” and keep them out of the reach of children. Don’t put pins in your mouth. Extension lights used in garage work must be wire-protected; if a hot bulb shatters, gasoline vapor might be ignited. Get rid of sharp toys and see that electric playthings are insulated properly. Sharp tools and kitchen knives should be inaccessible to children. Don’t throw broken glass in a waste-basket. Protect your outdoor radio antenna with a lightning arrester. Mop up spilled grease now, not later. Use only safety matches, and strike them away from you. Open the oven door for ventilation before lighting it. Clean up the rubbish pile in the basement and attic. Screen the fireplace. Get a fire extinguisher. Don’t clutter the stairs with mops and galoshes and loose things. Lighting fires with kerosene is dangerous. Paper lampshades can catch fire from hot bulbs. Pot handles should be turned away from the stove edges. Don’t pull out electric plugs by the cordâ€”pull the plug itself. Don’t put wires under the rug, or near a radiator. Keep a first-aid kit where you can find it.

Home ought to be a haven of safety. You can make it reasonably safe by enacting a few laws of your own and enforcing them. Inspect the house occasionally to see that the dangers you can foresee are abolished. By vigilance you will improve your chances of staying off the casualty list.