I particularly like this article because when I was growing up my family owned a grocery store and later a restaurant on the corner of Bedford street, just a few doors down from the narrow house featured on the second page. I remember being totally credulous when my dad explained that the family living there were really skinny so the narrow confines didn’t bother them at all. 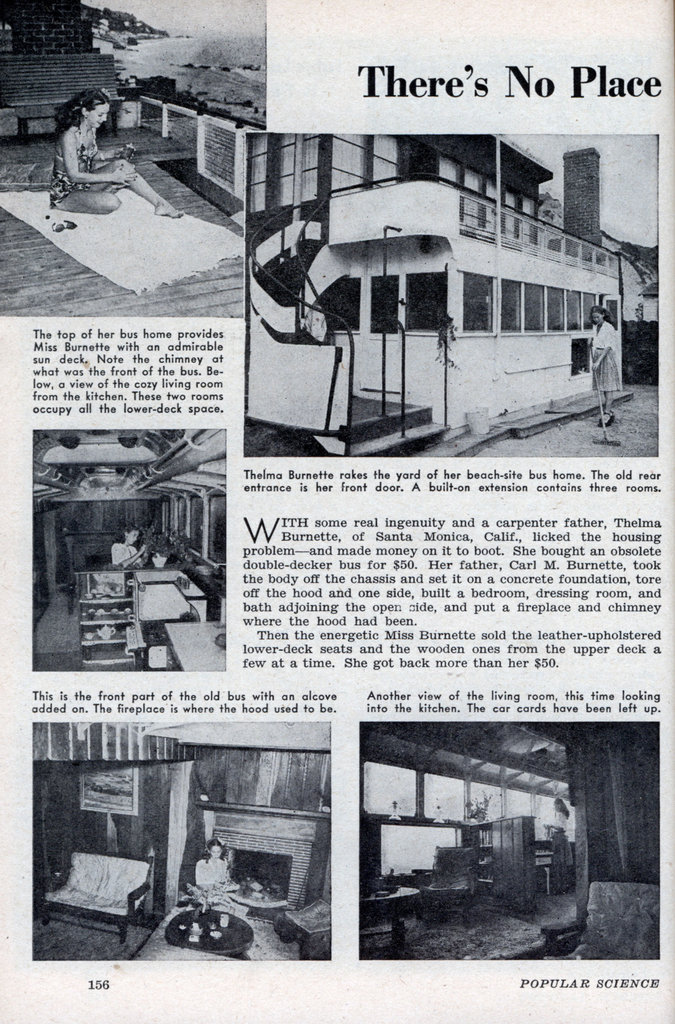 WITH some real ingenuity and a carpenter father, Thelma Burnette, of Santa Monica, Calif., licked the housing problemâ€”and made money on it to boot. She bought an obsolete double-decker bus for $50. Her father, Carl M. Burnette, took the body off the chassis and set it on a concrete foundation, tore off the hood and one side, built a bedroom, dressing room, and bath adjoining the open side, and put a fireplace and chimney where the hood had been.

Then the energetic Miss Burnette sold the leather-upholstered lower-deck seats and the wooden ones from the upper deck a few at a time. She got back more than her $50.

IN NEW YORK’S crowded Greenwich Village, the Jay Barnums and their four-year-old son Timothy solve their housing problem by being broadminded enough to live in the city’s narrowest house. The building is an architectural oddity built on a 9′ wide lot between an apartment house and a factory. In it the Barnums even find room for three petsâ€”a dachshund and two cats.

The first floor contains the kitch-en, a dinette, and a living room not an inch over 8-1/2 wide. Bedrooms are on the second floor along with a bathroom that is just big enough to turn around in. There are two bedrooms, one a “master” and the other, Timothy’s, hardly bigger than a pup tent. The top floor is all one room, a long and narrow studio. It holds a piano and Barnum’s drawing equipment and is used for storage, entertainment, and in a pinch as a guest room.

Guide books list the house, and sightseers often stick their heads in the window to see if anybody actually lives in such a slender structure.